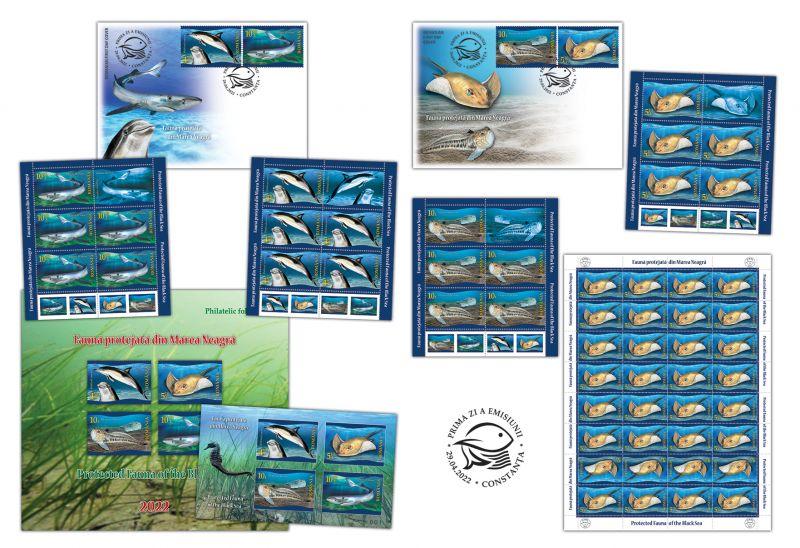 Romfilatelia continues the series of issues dedicated to Fauna and introduces into circulation on Friday, April 29th, this year, the postage stamps issue Protected fauna of the Black Sea.

The issue is composed of four stamps, four minisheets of five stamps with label and tabs, four sheet of 32 stamps with tête-bêche and two First Day Cover.

The Black Sea has its own biological characteristics, with peculiarities due to the genesis and paleogeographic past of the Pontic basin, its geographical position and the hydrological characteristics of the tributary rivers. The smaller range of species, compared to the spectacular diversity of other seas and oceans, has given this semi-enclosed aquarium the description of the “impoverished pocket of the Mediterranean”. At present, the Pontic ecosystem is in a fragile state of equilibrium, with prospects for gradual recovery, being home to many vulnerable species, with populations still under the sign of uncertainty.

Common dolphin, is illustrated on the stamp with the face value of Lei 4.50. The rostrum is long (10-20 cm) and has 40-45 conical teeth on each half of the jaw. The dorsal fin is high, sickle-shaped and sharp, located in the middle of the body, and the pectoral fins are short and broadly sickle-shaped; the caudal fin is concave, with a well-marked median notch. The body colour is bluish-grey to brown on the back, with a V-shaped side border.

Common stingray , is depicted on the stamp with the face value of Lei 5.10. It is a cartilaginous fish related to the shark. It lives in the region of warmer water shores. In our country, it approach the coast when the water reaches 12°C, looking for a place on the sandy bottoms and retreating to the depths when the water cools.

Greater weever, is represented on the stamp with the face value of Lei 10. It has an elongated, compressed body, reaching 30-40 cm, covered with relatively small scales. It has small scales on the cheeks and opercula. The eyes are set sideways, looking up. The snout is very short, with two plates pointing downwards. Large, upper mouth, with the upper lip interrupted in the middle. Teeth placed in a single row on the jaws. The lateral line descends into the region of the tail and often contains lateral branches. The spines of the first dorsal fin and the sharp edges of the opercula are very poisonous, their stings causing serious disorders in the body.

Spiny dogfish (Mud shark), is illustrated on the stamp with the face value of Lei 10.50. Compared to ocean sharks, the spiny dogfish, the shark specific to the Black Sea, has a small size. The size reached by males, 1-1.5 m, is smaller than that of females, which reach up to 1.7 m. The weight of the specimens ranges from 6 to 14 kg. The skin is covered with small, placoid scales.

Romfilatelia thanks the representatives of the Ministry of Environment, Waters and Forests, the specialists of the National Institute for Marine Research and Development “Grigore Antipa” Constanța and the National Museum of Natural History “Grigore Antipa”, for the documentary and photographic support provided to the development of this postage stamps issue.

The philatelic issue will be available starting Friday, 29th of April, in Romfilatelia’s shops network in Bucharest, Bacau, Brasov, Cluj-Napoca, Iasi and Timisoara and online on https://romfilatelia.ro/store/. 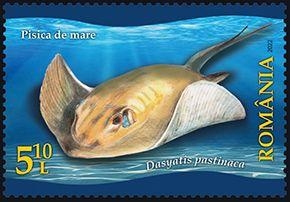 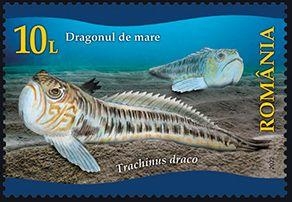 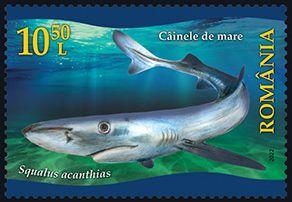 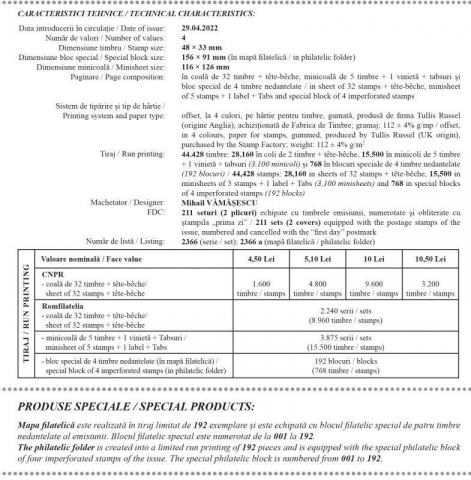 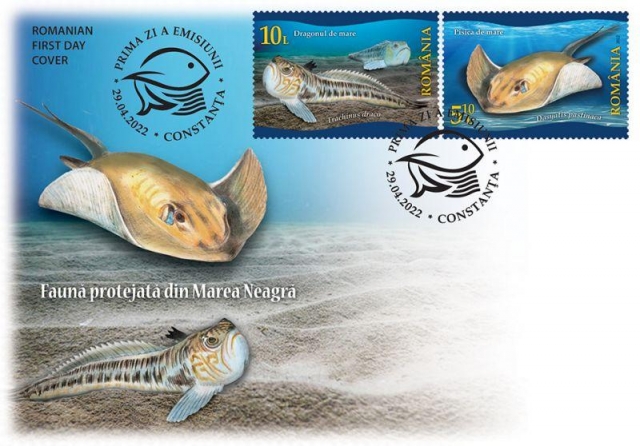 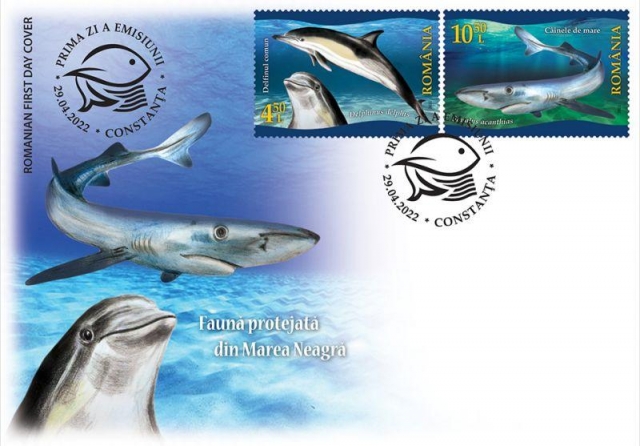 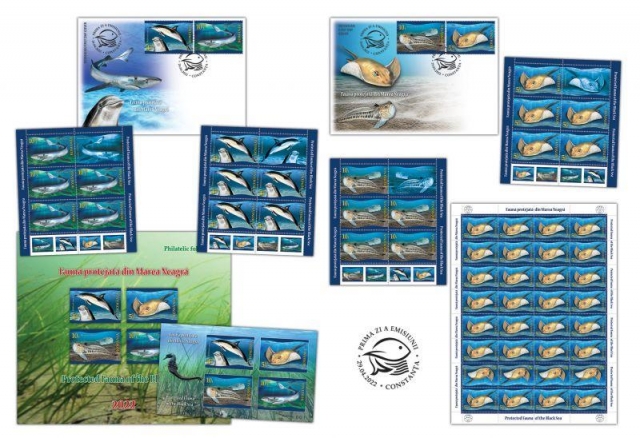 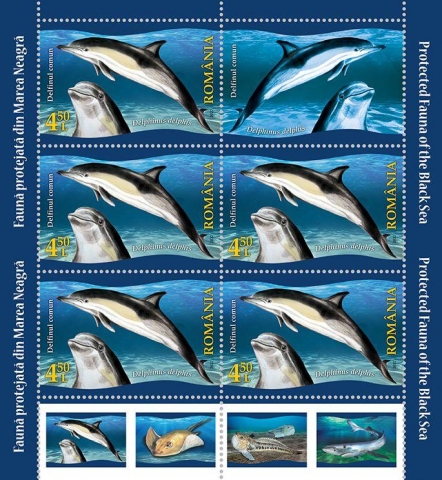 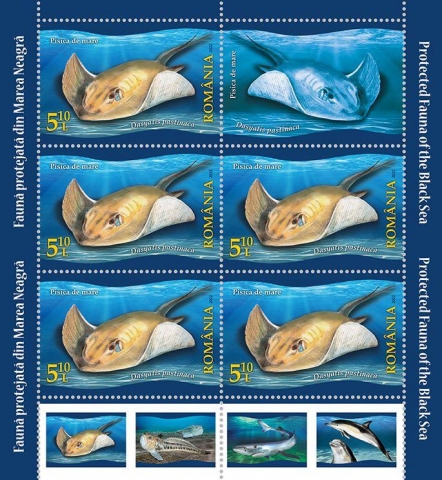 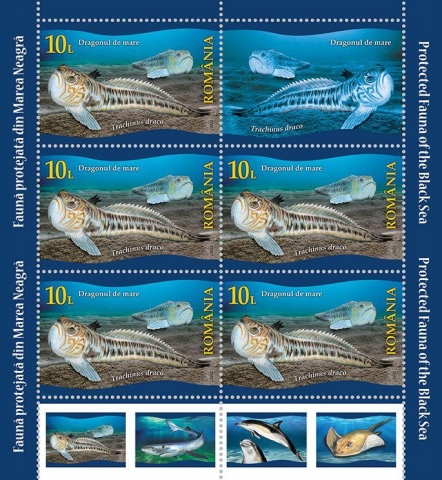 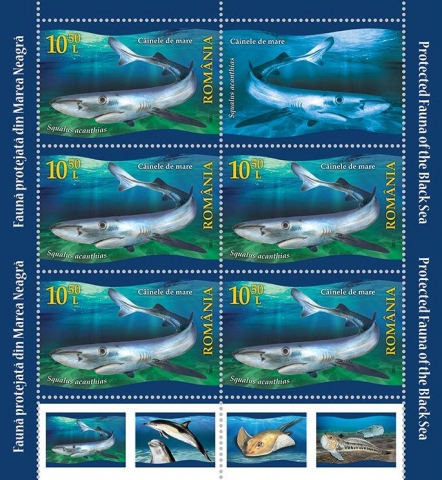 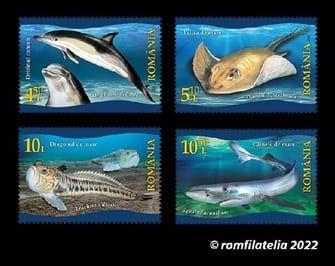 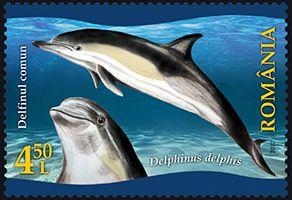 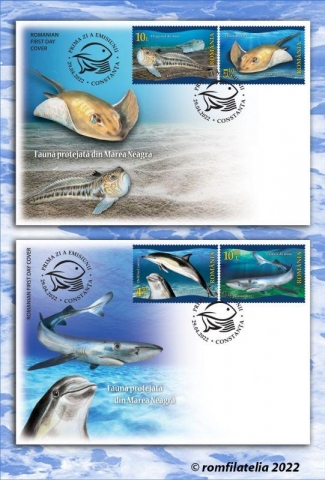 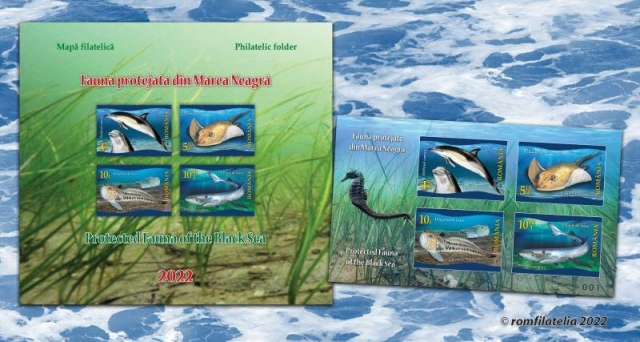 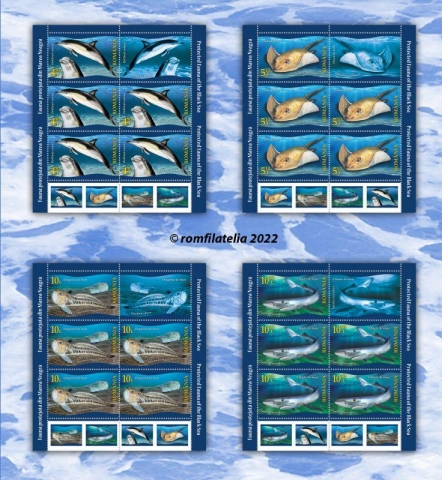