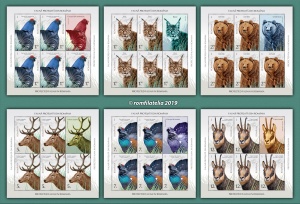 Global warming, human intervention on nature, including the destruction of habitats of wild animals, excessive hunting, have made dozens of animal species disappear over the last century.

Black grouse (Lyrurus tetrix), illustrated on the postage stamp with the face value of Lei 1.60, is a species characteristic of the upper mountain forests. The body length is 40-58 cm and has an average weight of 1,000-1,450 g for the male and 750-1,110 g for the female.
The wingspan is between 76-82 cm. The male has a glossy, blue-black plumage and tail feathers bent in lyre shape, that open in fork shape in flight. The female is brownish. It is a polygamous species.

Adult food is predominantly vegetal (leaves, buds, seeds, fruits), and that of chicks is mostly animal.

The maximum known longevity is 12 years and three months.
The main area of the black grouse comprises the boreal areas, with passages towards temperate-humid and temperate-arid areas.

Eurasian lynx (Lynx lynx), represented on the postage stamp with the face value of Lei 1.90, is the emblematic feline of the Carpathians, and an extremely discreet carnivore, living in isolation and avoiding contact with inhabited areas.

It is the third largest predator of Europe, after the bear and the wolf. It has a relatively short trunk, long legs and very well-developed paws, with which it runs very efficiently through snow. The famous tufts of hair on the ear tips make it so popular.

It lives in a very varied and vast area. It appears along the mountain ranges in south-eastern and central Europe, but also from the north or east of the continent, up to the boreal forests of Russia, then the centre of Asia and the Tibetan Plateau.

Brown bear (Ursus arctos), illustrated on the postage stamp with the face value of 2.90 lei, is a particularly strong animal belonging to the Urside family. It is the largest carnivore in our country and almost authoritative master of mountain forests, and it can be found along the Carpathian chain, its omnivorous food including the forest fruits.

The weight of the brown bear varies depending on time and season, in the autumn before entering the lair having the greatest weight due to the rich summer meals. Its hair may be brownish to black, the richer being the one in winter, which can reach at the withers even over 10 centimetres in length.

According to the feeding regime, the brown bear is an omnivorous animal. It is a great amateur of mast or acorn, in seek of which it sometimes makes long journeys. In summer, it consumes forest fruits, mushrooms, succulent herbs. It enjoys the mushrooms, pears and wild apples, while ants and larvae are a permanent diet component.

A strong bear can reach a length of 2,50 metres with a height at the withers that exceeds 1,30 metres and the weight is over 400 kilograms.

Their wide adaptive plasticity allows them to live from the sea coast to the alpine heights, at 3,000 m altitude. They avoid compact coniferous forests, and in deciduous tree forests they look for groves, with bushes and grassy, high vegetation. The red deer makes altitude migrations, descending when the snow falls and looking for southern slopes, and climbing in April – May.

As to size, stags weight 180-300 kg, and hinds only reach 80-150 kg. Stags lose their horns at the beginning of each spring, a phenomenon that stretches, depending on the age and vigour of each individual, even until May.

They feed on plants from 150 to 300 species, mushrooms, shoots, buds, fruits, bark, lichens. In winter, food is deficient, as is the case for all species of Cervidae, and consists of sprouts, buds and sometimes tree bark, green leaves left under the snow, various dried herbs, and green plants from cultivated agricultural lands.

The abundance of birds in the territory it occupies is not uniform, being more numerous in the northern Oriental Carpathians and on the northern slope of the Meridional Carpathians. It prefers mature but not very thick spruce forests, at altitudes between 800-1,800 m.

Alpine chamois (Rupicapra rupicapra), represented on the postage stamp with the face value of Lei 12, is an agile climber, capable of jumping 2 m in height, 6 m in length and running at 50 km/h – the flexible hoof pads providing a safe grip on rugged and slippery terrain.

It prefers mountain areas, usually above the upper limit of forests, but also descends to subalpine areas, with steep, rocky slopes and even in cirque glaciers where the anthropic impact is lower.

Both males and females have non-caducous horns that are similar in both sexes, being of black colour, rarely dark grey. The length of the horns can reach 32 cm. The male horns are stronger, thicker and more bent.

The height at the withers is 70-90 cm. The colour of the fur on the head is characteristic. On the forehead, a white spot extends from the area between the horns to the tip of the nose. The mouth is covered with hair, only the area near the nostrils and a small strip on the top of the lip are nude. A broad black stripe extends from the upper lip and the tip of the nose, over the eyes, to the area between the base of the ears and the base of the horns.

The preferred habitats of the Alpine chamois are the cliffs covered with lichens, glacier circles with persistent snow spots until the middle of the summer, tangles and large junipers. It consumes seeds and herbs of about 100 species. In winter, besides hay and green grass remnants, bark, branches, lichens, and bushes of shrubs.

European bison / Wisent (Bison bonasus), illustrated on the perforated souvenir sheet having the face value of Lei 28.50, is the heaviest terrestrial animal currently living in Europe. One specimen measures about 2,8 – 3 m in length and 1.8 – 2.2 m in height, weighing between 300 and 920 kg. The colour is slightly lighter than its American relative(Bison bison), and has shorter hair on the neck, head and anterior body, but longer tail and horns.

It is a ruminant mammal and consumes both grass and fibres. It avoids areas with increased humidity and low water resources, adverse conditions for grazing and searching, steep slopes and high snow.

Like other large herbivores, the European bison is of vital importance for the survival of Europe’s biodiversity, especially in regards to plants. This, along with its rare presence and impressive appearance, make the European bison a key species in nature conservation.

On the set of two First Day Covers is illustrated the Dunarita or the Danube spined loach (in Romanian, Zvarluga de Dunare), a freshwater benthic rheophilic fish from the family of Cobitidae, spread in the middle and lower course of Danube from Bratislava to the spill and the lower course of its tributaries: Tisa, Sava, Mures, Bega, Cerna, Arges, Jiu, Nera, Olt, Siret, Prut. It is a small-sized species with a length of up to 10 cm at adulthood.

It prefers the flowing waters whose facies are made up of ratchel mixed with sand and clay. It enters for reproduction in all the small, fast-flowing and rocky rivers, which discharge from the mountains in the tributaries of the Danube, fact which attracted its name, that of “Dunarita”.

Romfilatelia thanks the Ministry of the Environment and “Grigore Antipa” National Museum of Natural History from Bucharest for the documentary support given to this postage stamps issue and the photographer Silviu Matei. 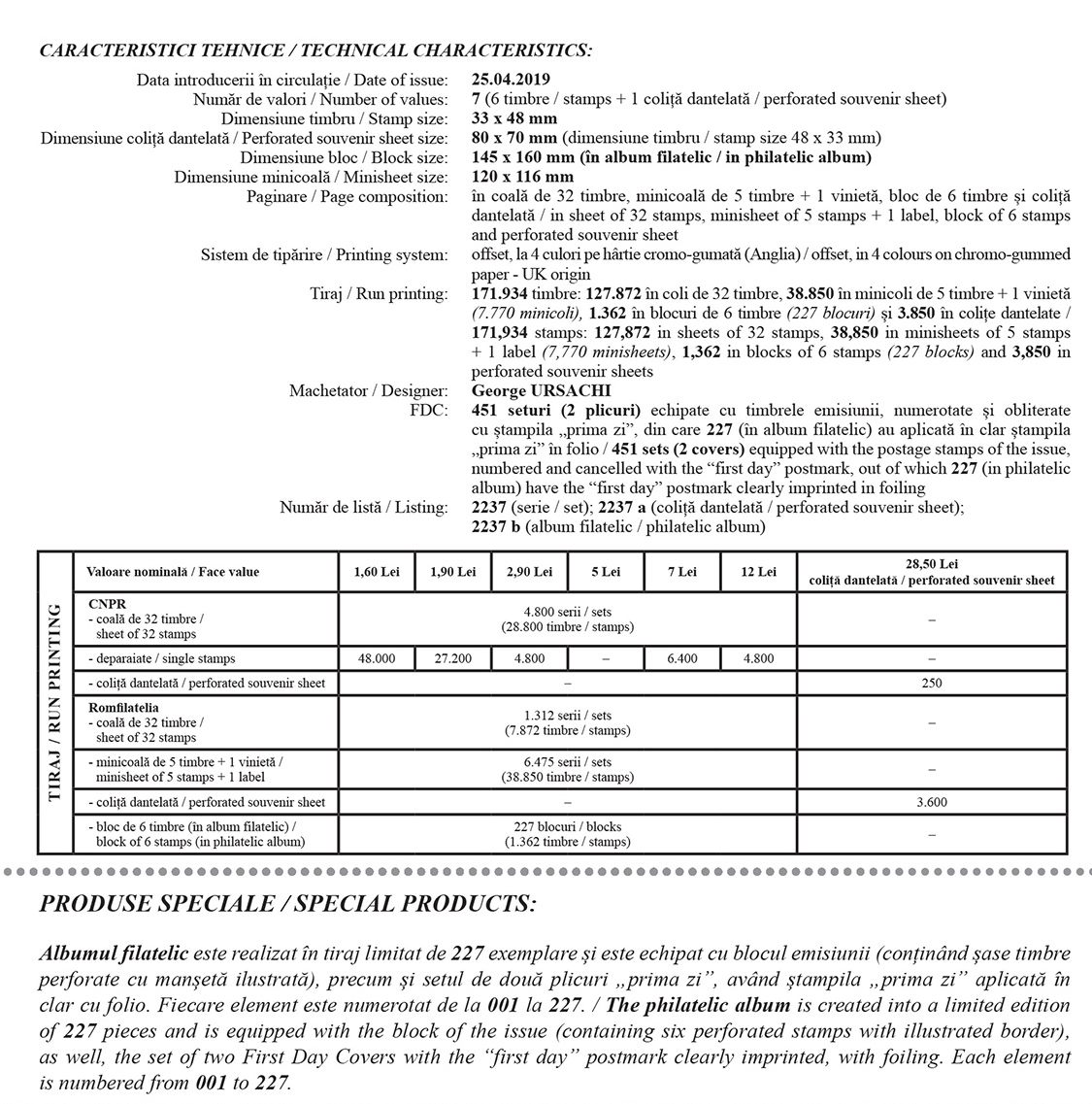