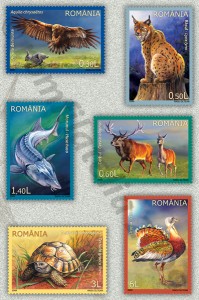 Romfilatelia introduces into circulation the postage stamps issue “Protected Fauna from Romania”.          Romfilatelia introduces into circulation the postage stamps issue “Protected Fauna from Romania”.
The global warming, man’s interference within nature, the destruction of animals’ natural habitat caused by the mankind progress and of the development of buildings areas, as well as excessive haunting, have made tens of animal species disappear during the last century.
From a biogeographical point of view, Romania comprises three geographic segments: plains, hills and mountains. Due to its positioning at half the distance between the North Pole and the Equator, Romania is a country with a high biological diversity, expressed at the ecosystem level and at the species level alike, offering the conditions needed for the preservation of the specific biologic diversity (pedoclimatic and hydrologic ones). Therefore, on our territory, can be differentiated about 52 ecoregions, with a variety of terrestrial and aquatic ecosystems, specific to the coastal areas and to the seashore of the Black Sea, to the steppe and silva-steppe, to the hills, mountains, lakes, to the watercourses and their meadows, to the arid areas and to the wet ones, including to the ones of the Danube Delta.
The theme Fauna is in the top of the postage stamps collectors’ preferences, and this new issue will complete their collections with the images of six protected animal species, some of them extinct or at risk of becoming extinct: the Golden Eagle, the Lynx, the Red Deer, The Beluga Sturgeon, the Greek Tortoise and the Great Bustard.
The Golden Eagle (Aquila chrysaëtos), illustrated on the postage stamp with the face value of RON 0.30, is a very quick bird, and one of the strongest predatory birds. The wing span may reach two metres. It has brownish plumage with golden iridescences; at the bottom of the tail it also has a few white feathers. It hunts mice, rabbits, quails, grouses and even chamois kids and other wild goats.
The Lynx (Lynx lynx), illustrated on the postage stamp with the face value of RON 0.50, is also called the Carpathian panther. Its habitat stretches from the Alps, Tatra, the Carpathians, the Balkan Peninsula and the Caucasus, then in the Himalaya to the Sahalin Island, Northern India and Asia Minor. As a result of excessive hunting from the 19th and 20th centuries, the specimens are very scarce outside the Carpathians and Sub-Carpathians. It is a quick carnivore that hunts at dusk, moving silently and being very hard to notice, maybe because of its fur, which gives it a special camouflage. Its leaps are almost six metres high. It has very well-developed hearing and smell, and the sight is extremely good. Less common knowledge is the fact that the lynx can be tamed, showing dog-like faithfulness towards the one having raised it.
The Red Deer (Cervus elaphus), illustrated on the postage stamp with the face value of RON 0.60, is a herbivore mammal of the same family (Cervidae) as the reindeer and the moose. Its characteristics are its ramified antlers which generally grow only with the males. The red deer’s weight reaches 180 to 300 kg. At the beginning of each spring, male shade their antlers. A red deer generally lives about 18-20 years. They can be found in large woods, in glades and in everglades with springs of water.
The Beluga Sturgeon (Huso huso), illustrated on the postage stamp with the face value of RON 1.40, is the biggest of the sturgeons and the most valuable fish in the Romanian waters. Some specimens attain even 1,500 kg and 9 m in length. It has a thick body, elongated to the tail and head. The head is little as opposed to the body, and the nose is short and soft. The colour of the body is generally grayish, and the tat of the stomach is white. It can live up to 75 years. The beluga roe is usually bigger than that of other sturgeons, the female laying up to 8 million eggs.
The Greek Tortoise (Testudo graeca ibera), illustrated on the postage stamp with the face value of RON 3.00, has a length of 16 to 28 cm. The shell is yellowish, slightly darkened, uniformly brownish or even olive. It can be found on dry land, with thick bushes; it likes the warmth. It feeds with herbage, juicy leaves and young roots. From May to June, the female lays about 4-12 spherical white eggs in the sand, and they need a 70-80 days’ incubation period. The Greek tortoise lives about 90-125 years.
The Great Bustard (Otis tarda), illustrated on the postage stamp with the face value of RON 6.00, is a bird protected by law. The great bustard is an endangered species in Romania. It has a weight of about 15 kg (the male) and of 3-4 kg (the female) and a height of one metre. It is a very good runner and it lives in steppes and large plains. It has reddish brown plumage on its back, with black spots and lines. The tail is made of 20 feathers, and the beak is short, straight and strong. It feeds on seeds, shoots, angleworm, snails and insects.

We would like to thank the “GRIGORE ANTIPA” National Museum of Natural History for the documentary consultancy offered in the accomplishment of this philatelic issue.