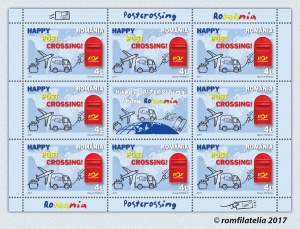 Postcrossing began as a project between friends sharing the same passion.

“A postcard is a tangible medium of communication. Unlike emails, which are fast, a postcard is personal… postcards travel around the world, until they get to a mailbox, this is special! That’s significant!”explains Paulo Magalhães in an interview given to the magazine Europe and me.

In 2005, Paulo Magalhães, a Portuguese student who liked to receive and send postcards, developed a web site that provides a free platform for people who want to exchange postcards.

The project slogan is: “send a postcard and receive a postcard back from a random person, somewhere in the world”.

Currently, the number of registered members is over 660,000 from aproximatively 200 countries.

Because Postcrossers not only collect postcards but also the stamps accompanying them, Romfilatelia, meets the stamp collectors expectations with the postage stamp issue dedicated to this passion, called Postcrossing. The 1364 members from Romania registered until now on the Poscrossing platform, sent in the last 11 years of activity over 120,000 postcards throughout the world, thus becoming important ambassadors of our country. Starting from choosing the postcard, the thoughts that it conveys, the thanks and smiles you receive in exchange and culminating with the excitement of waiting a postcard in return, these are just some of the advantages you have as a Postcrosser.

Why become Postcrosser? Because every time you’ll be surprised from what place in the world you will receive a postcard. You can receive postcards from people who live in places that maybe you have never heard of. With every postcard received, you learn something new. Postcrossing gives you the chance to get to know the countries and cultures through local landscapes, architecture, flowers, art, hobbies and holidays. A Postcrosser will write about his hobbies, family, work, life in their city, thus creating friendships. Apart from that you can collect postcards, including collecting stamps. Stamps that mean art, culture and beauty.

The stamp of the issue illustrated the trip that a postcard makes, crossing the world and arriving in the postbox of the recipient as well as the colours of the Romanian flag.

If we have convinced you and you feel your heart beat a little faster when you expect with excitement to find good thoughts sent to the mailbox from prospective friends, you can join the Postcrossing community at www.postcrossing.com.

Happy Postcrossing!  Romfilatelia thanks the Romanian National Post Company, Mr. Paulo Magalhães and Mihnea Raducu for their documentary support granted in the creation of this issue postage stamp issue. 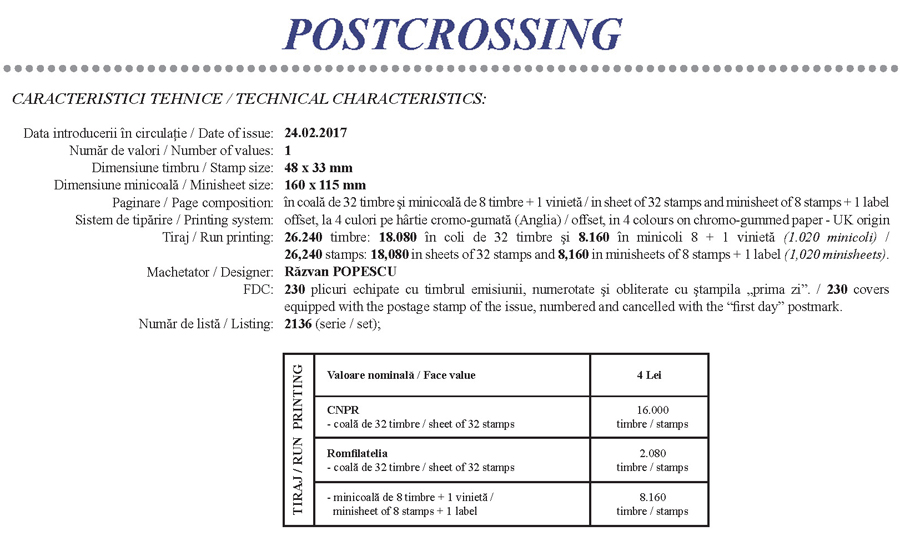