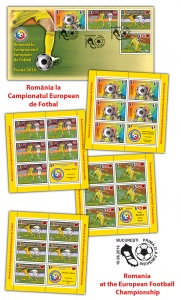 To all football lovers in Romania and national supporters, Romfilatelia dedicates its latest philatelic project representing an important sportive event, the European Football Championship France 2016. Romania’s participation to this noteworthy tournament is also marked from a philatelic point of view, through the postage stamp issue entitled suggestively Romania at the European Football Championship France 2016, which can be purchased starting with Friday, June 10th, 2016, in Romfilatelia’s stores in Bucharest, Bacau, Brasov, Cluj-Napoca, Iasi and Timisoara.

The European Football Championship began in 1960 in France, under the name of European Nations Trophy, the competition final, played by teams from Yugoslavia and the USSR, being won by the Soviet squad. Held every four years, the European Football Championship receives its current name starting with the 1968 edition, when the tournament was both hosted and won by Italy, in a match against Yugoslavia by 2-0.

Romania’s national football team was present for the first time at the European Championship in 1984, managing to win leadership of the preliminary group which included Sweden, Czechoslovakia, Italy and Cyprus. The final tournament, in which Romania participated alongside the teams of Spain, West Germany and Portugal, was won by the Spanish team, which defeated France in the final match.

Thirty two years later, Romania is a participant in the European Football Championship, EURO 2016, which will take place in France, the inaugural game being between the host country and the Romanian team. The Albanian and Swiss teams are also in the group in which Romania was assigned, the three games of our national team being scheduled on June 10th, against France, June 15th and June 19th against Switzerland and Albania respectively.

The postage stamp issue Romania at the European Football Championship France 2016 is dedicated to both our national team and all Romanians who love this sport and hope that our players will manage to bring joy to their supporters through victories in the qualification group, which would allow the Romanian football to be in the list of the top-tier sporting European values.

The four stamps of the issue symbolically illustrate football players, without the characters being identified, and phases of play, a “presentation” of Romania’s participation in the group’s games, as follows:

– The stamp with the face value of lei 3 graphically illustrates the inaugural game France – Romania, which will take place on June 10th, on Stade de France, Saint-Denis;

– The stamp with the face value of lei 3.50 represents the second game of Romania’s national team, against Switzerland on June 15th, on Parc des Princes, Paris;

– The stamp with the face value of lei 4.50 illustrates Romania’s third game, against Albania, which will take place on June 19th, on Grand Stade de Lyon, Lyon;

– The stamp with the face value of lei 16 graphically presents the flags of the whole A group, respectively Romania’s opponents, in the order in which the games will be played. To them is added the logo of the Romania Football Federation, found on the labels of all the minisheets.

The four postage stamps are completed by a first day cover, and as page composition were used the sheet of 32 stamps and the minisheet of 5 stamps + 1 label.

Romfilatelia thanks the Romanian Football Federation for their support in the creation of this postage stamp issue and wishes: