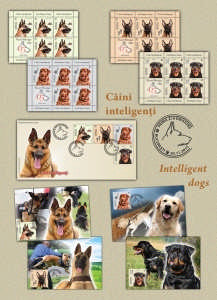 Many consider dogs as man’s best friend and certainly the unique relationship we have with these animals deserves a special status. Therefore, Romfilatelia and the Romanian postage stamp honour canis semper fidelis through a postage stamp issue entitled Intelligent dogs, which brings to the forefront the relationship between man and his four-legged friend and marks 65 years since the establishment of the Cynological Centre Sibiu, an institution dedicated to the fulfillment of the whole potential of this relationship. The philatelic elements of the issue will be available starting from Friday, November 20th, 2015, in Romfilatelia’s shops in Bucharest, Bacau, Brasov, Cluj-Napoca, Iasi and Timisoara.

The four dog breeds which are illustrated on the issue’s stamps are currently used in the role of protection and watchdogs, for processing traces of odor, detection of explosives or illegal substances, as well as in the aid of rescue and relief teams. This demonstrates the amazing evolution of the man-dog relationship, over time people finding increasingly more opportunities in which not only the canine friendship and devotion, but also their sharp senses, intelligence and loyalty can bring a benefit to our community.

The German Shepherd, illustrated on the postage stamp with the face value of lei 2.40, is a breed that has developed continuously, today being used for most categories of service, fact that contributed to the strengthening of its prestige.

Considered to be descended either from shepherd dogs from Central Europe, either a cross between local dogs with the English Deerhound, the Belgian Shepherd Malinois, represented on the stamp with the face value of lei 5.00, fits best the requirements regarding a good protection or assistance dog, being lately used, with very good results, by many European police and gendarmerie for most categories of specific service.

The Labrador retriever, depicted on the stamp with the face value of lei 8.10, is one of the most popular dog breeds in the world and originates in Newfoundland Island Canada. Its qualities propelled him to the top category of hunting retriever dogs, proving it can meet the requirements imposed by the activity of detecting explosives and narcotics, but being also known as an excellent dog for companionship and leading the blind.

As one of the most widespread and popular breeds in the world, the Rottweiler, depicted on the stamp with the face value of lei 9.10, is considered among the best dogs for proctection. It is a dog that exudes power by its mere appearance, has a strong personality and a high fidelity to its master, but can also be aggressive when provoked.

The four stamps of the issue are completed by the first day cover and a set of 4 maxicards, while as page composition were used the sheet of 28 stamps and the minisheet of 5 stamps + 1 label.

Romfilatelia thanks the Cynological Centre Sibiu for the documentary support granted in the creation of this postage stamp issue.