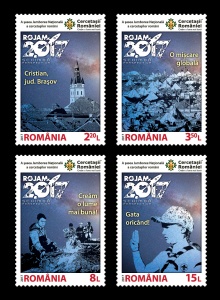 Today’s young people have the chance of learning to live genuine values such as loyalty, trust, friendship, patriotism, empathy, the sense of duty, following activities such as those carried out by the Romanian National Scouts Organization, under the High Patronage of the President of Romania.

The scouting theme is a traditional one for the Romanian postage stamp, as it is the fourth time when it is dedicated a philatelic issue to this topic.

This year edition, RoJAM 2.017, will take place in August 4th – 15th, 2017, in Cristian village from Brasov County. The scouts will build their own settlement in the middle of nature for ten days, where they will learn from each other how to live harmoniously together and build a Better World.

This issue is comprising of four stamps which reflect various aspects of the scouting life as well as the framework of this educational camp.

The stamp with the face value of Lei 2.20 represents a tower of the fortified church in Cristian.
The place and its surroundings will remain in the memory of the 1800 adolescents who will attend this international celebration.

The stamp with the face value of Lei 3.50 symbolizes scouting as a global movement currently numbering over 40 million active members in 224 countries and territories, being the largest educational youth movement in the world. In the picture one can see scouts tents from different countries, participating to the Jamboree.

The stamp with the face value of Lei 8 captures a symbolic image for scouting, in which the scouts stand around the fire. Between scouting and nature there is a true symbiosis that has developed over the years, the scout finding shelter, food, training and personal development, nature finding a true friend and protector in the scout, who knows how to respect it. “Creating a Better World” is the mission of scouts in the world.

The stamp with the face value of Lei 15 reflects the scout salute. The three raised fingers signify the three principles of the scout movement: duty towards oneself, to ones neighbor and to God, while the big thumb placed over the small one signifies the great helping the small. Ready Anytime! or Be Prepared!, the exhortation of Lord Baden Powell, the founder of the Scouts, is also their motto.

The mission of Scouts in Romanian society is to contribute to the education of young people through a system of clear values, to help build a better world in which people are fulfilled as individuals and play a constructive role in society.

This postage stamp issue is completed by a First day cover, and as composition there were used a sheet of 32 stamps, the minisheet of 5 stamps and label. The Firs day stamp is available at the Postal Office no. 1, from Brasov, from 1st Nicolae Iorga Street.

Romfilatelia thanks the National Romanian Scouts Organisation for the documentary support and to Mr. Radu Stinghe for the design of this postage stamp issue.