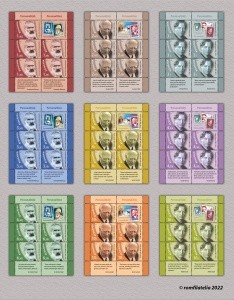 “Music mirrors all mysterious ripples of the soul, without the possibility of dissimulation.”

“Working on the stone, you discover the Spirit – hidden in matter…
For the sculptor’s hands always think and follow
the thoughts of the material.”

In order to release the first postage stamps of 2022, on January 5th, Romfilatelia developed a series of definitive stamps with the theme “Personalities”, consisting of nine face values.

The famous diplomat and historian Neagu Djuvara stated in a comment for the album “Centenary Romanians”: “Romania gave two great personalities to the world: George Enescu and Constantin Brâncuși”. To this appreciation one should add the name of the great inventor Henri Coandă, the undisputed pioneer of the invention of flight, called by the great specialists in the field “the father of jet aviation”.

Born in Liveni-Vârnav, Botoșani, on August 19th, 1881, George Enescu was trained as a musician and instrumentalist following his studies in Vienna and Paris where he had Massenet, Fauré, Gédalge and Marsick as his masters. Among the colleagues of the future genius of music were Cortot, Thibaud and Ravel.

George Enescu’s talent manifested from his early youth: “at the age of 13 he played as brilliantly on the violin as on the piano” (Bernard Gavoty). At the age of 16 he composed the Poema română [Romanian Poem], the work most loved by King Michael I during his exile.

An important representative of the Romanian Royalty, Queen Elisabeth, had a special appreciation of the talent and personality of the great Enescu, also materialized in a precious gift offered to him at the age of 17, the complete edition of Bach’s works, published in Leipzig (60 volumes). The special connection between the Queen and the composer is also demonstrated by the fact that at the end of the Romanian Poem there is the Royal Anthem of Romania.

The great composer’s reference work is undoubtedly the work Oedipus, which was composed and completed after two decades (1910-1930). But the true recognition and appreciation came after 2000, when, at the Frankfurt Opera (2013) and the Royal Opera House (2017), it was staged and appreciated as “truly one of the great works of the twentieth century”. The world thus rediscovers Enescu in the position of a universal personality, that is placed at the top of the crystal pyramid of the Romanian composition school. He approached all musical forms and genres from the small ones (lied, choir, instrumental miniature), to symphony, symphonic poem and opera.

The great Man and illustrious musician of the world died alone, exiled to Paris, but as a well-deserved compensation, millions of people know his name, and his creations pour forth their charming harmony of sounds on all meridians of the planet’s continents.

The future great sculptor Constantin Brâncuși was born in Hobița Village, Peștișani commune, Gorj County, on February 21st, 1876. After classes at the School of Arts and Crafts in Craiova, he was sent to Vienna in 1897 to make decorative wooden works, commissioned for Peleş Castle.

After graduating from the School of Fine Arts in Bucharest, he went to Vienna, Munich and Switzerland, to Paris, spending a short time in the workshop of the sculptor Rodin, where he was accompanied by another future famous Romanian, Henri Coandă.

Brâncuși was in the period when the glories of Paris were Matisse, Picasso, Chagall, and Max Ernst. Among his friends were Modigliani, Henri Rousseau, Apollinaire and Marcel Duchamp.

His works are exhibited for the first time in 1906 in Paris and then in 1908 in Bucharest, within the exhibition Tinerimea Artistică [Artistic Youth]. In Bucharest, in 1912, he won the first prize at the Official Salon. Then followed the attendances at the Modern Art Exhibition in New York and then in Chicago and Boston. In everything that were to follow after his works Rugăciunea [Prayer], Cumințenia pământului [The Goodness of the Earth], Sărutul [The Kiss], Muza adormită [The Sleeping Muse], the artist would feel overwhelmed by the mysterious forces of the universe, the primordial forms and the pure form, without detaching himself from the sources of inspiration of his native lands.

Brâncuși stated, with the wisdom of the elders of Gorj County, that he came to Paris carrying the Romanian ancestral legends in his bag. These can be summarized as follows: the origin of the world, the myth of ascension (flight), the theme of love and fertility, the myth of death and sleep, the nostalgia of infinity and cosmos.

After participating in exhibitions organized in France, America, Switzerland, he travelled to Egypt and India and returned to Romania to build the monumental ensemble in Târgu Jiu, where he worked until 1938. It should be noted that in 1937, the works of the great sculptor were exhibited at the Romanian Pavilion within the International Exhibition in Paris.

The artist, completely detached from the spirit of his teachers, demonstrated that the simplicity and purity of the sculpture can reveal more deeply the truth hidden in the form of real things. His sculptures reveal a special connection with Romanian and universal myths, such as Măiastra [The Master Bird] associated with the Phoenix bird. Pasărea în spațiu [The Bird in Space] has become a symbol of flight and ascension.

Brâncuși inscribed his work as a page of culture, unquestionably occupying the centre of world contemporary art. According to a famous promoter of Brâncuși’s work, Sir Herbert Read, “three milestones in Europe measure the history of sculpture: Phidias, Michelangelo, Brâncuşi”.

Born on June 7th, 1886 in Bucharest, Henri Coandă, the future great inventor, lived in the middle of a family with military traditions, his father being General Professor Constantin Coandă.

After graduating from the Military High-School in Iași and the Military Artillery School in Bucharest, Henri Coandă enrolled at the Higher Aeronautical School in Paris, graduating in 1909. He attended advanced courses at the Montefiore Institute of Electricity – Turin, Technische Hochschule in Charlottenburg – Berlin and the University of Ličge.

Along with his preoccupations as an aeronautical engineer, Henri Coandă cultivated some of his passions: the game of rugby, the violoncello and sculpture (he was an apprentice in Rodin’s workshop, together with his compatriot Constantin Brâncuși).

He was appreciated by the personalities of the time, including Gustave Eiffel, Paul Paintlevé and Louis Blériot, who also supported him in his aeronautical research.

In 1910, at the Paris Air Show, he presented the project of the first jet engine, with which he equipped the first “propellerless” aircraft. Baptized by its inventor “turbopropeller”, its characteristics include it, according to current standards, in the category of “motor reactors”.

The results of the prototype test were unanimously appreciated, and its inventor subsequently provided specialized assistance for the construction of about 10 types of aircraft in England and France.

However, his concerns went beyond aviation, being known for a number of other important inventions: a new material (wood–concrete), a device for detecting groundwater liquids, used in oil exploration, the design of a marine drilling system and a modular system, using solar energy to desalinate seawater.

Member of the Romanian Academy and President of the Institute for Scientific and Technical Creation in Bucharest (INCREST), Henri Coandă enjoyed the appreciation of his compatriots. Along with numerous distinctions received from scientific forums abroad, the great inventor received in 1970, in Bucharest, the Order of Scientific Merit, 1st class.

The series, conceived in the “retro” tradition of Romanian philately, reproduces each portrait in three different chromatic shades, offering collectors a unique collector’s item. The mini sheets with vignettes and the tabs with appreciative defining texts (in Romanian and English), are also constituted as collectible pieces with special value. 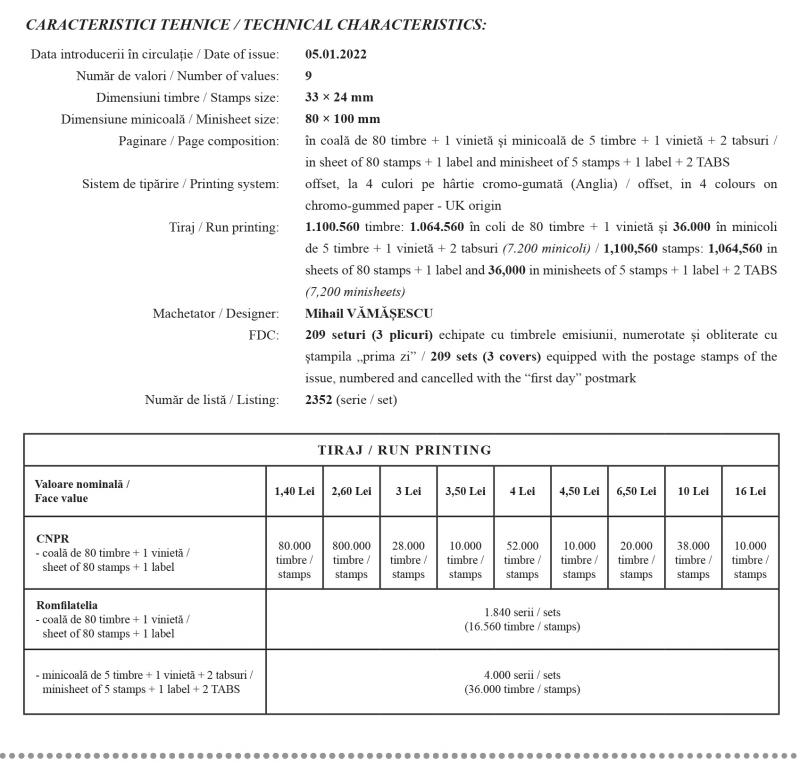