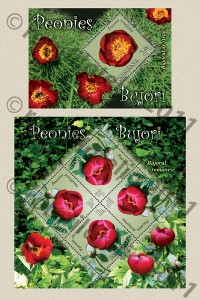 The peony, spread over the temperate Eurasia, is the flower often described in Europe as “the thornless rose” and mentioned for the first time around 77 A.D. by Pliny the Elder.

Growing peony in England was mentioned in 1157 and Shakespeare makes a reference to the peony in “The Taming ofthe Shrew” (1603).

For sailors, the presence of the peonies on board meant protection against storms.

In Eastern Asia, the Tree Peony – Paeonia suffructicosa and the Chinese Peony – Paeonia lactiflora (with white flowers androse scented perfume) used to be traditional decorative motifs for the tracery sewn on expensive fabrics.

In China, the peony is a symbol of wealth and honour due to its aspect, the beauty of the red colour and the delicate perfume of the flower. The Chinese name of the flower, meutan, is composed of the word tan (cinnabar), the elixir of immortality, which connects the peony to the phoenix (a small Ethiopian bird of a rare beauty, gifted with fabulous longevity and able to reborn from its own ashes).

For other peoples, as a result of subjective assessments based on the expression “to blush like a peony”, the flower was falsely transformed into a symbol of shame.

The Paeonia peregrina (Romanian Peony), illustrated on thep ostage stamp with the face value of lei 1.00, belongs to Paeoniaceae family.

It is an herbaceous plant, with straight and unbranched stems, 50-80 cm high. Mostly, the peony flowers are solitary, large,made up of 5-6 sepals and 7-11 bright red 5-7 cm long petals.

The flowers of the Romanian peony are used for tea or jam.

In our country, it can be found in the woods from Oltenia,Wallachia and Moldavia. In Wallachia, in Comana (Giurgiu County), an area for the protection of the peony has been arranged since 2004 having the status of National Park and Scientific Reservation.

The Paeonia tenuifolia (Fern Leaf Peony), illustrated on the postage stamp of the souvenir sheet with the face value of lei 2.10, is also part of the Paeoniaceae family. Commonly, it is also called Rusioara or Ruja de Rusalii.

With a height of 10-30 cm (rarely 50 cm), the fern leaf peonyhas wispy leaves, finely divided as those of the dill.

The Fern Leaf Peony can be easily identified from other types of peonies due to the beauty of their flowers, remarkable from late April until early May. Its buds bloom into large flowers, with blood-colour petals which surround the central disk of the flower on two rows with its yellow winding stamina, arranged in spirals.

This rare and protected plant can be found in the sunny areas from South West and South East Romania. In our country exists, since 1932, the only fern leaf peony reservation in Europe (on Academician Alexandru Borza’s initiative) in Zau de Campie (Mures County). The first evidences and data on this place were published in 1846, in Vienna.

In the same year (1932), this species, which, in the above-mentioned reservation, lies on 2.5 ha, was declared a natural monument.

We would like to thank the Comana National Park (Giurgiu), the Zau de Campie Town Hall (Mures), and Mr. Adrian Oprea –Manager of Iasi Botanical Institute, Mr. Dumitru Murariu – Manager of “Grigore Antipa” Natural History Museum and the photographer Victor Bortas, for the documentary consultancy and the images supplied for the accomplishment of thispostage stamps issue. 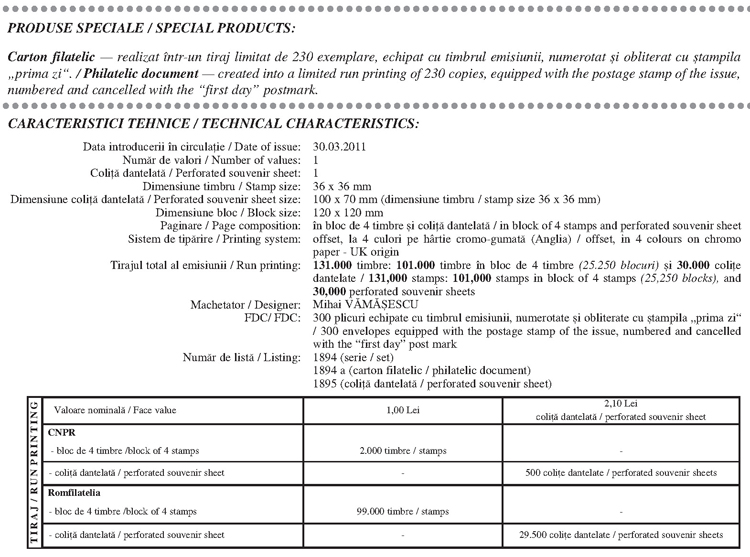