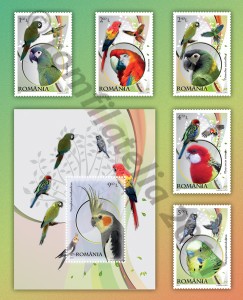 They are found in the entire Southern hemisphere of the Earth, from Australia to India, from Southeastern Asia up to Western Africa, but also in Southern and Central America.

Many parrots’ species can imitate the human conversation and different sounds.

Romfilatelia introduces into circulation the postage stamps issue „Parrots“ whose stamps illustrate the following parrots’ species: the Illiger’s Macaw, the Scarlet Macaw, the Yellow-collared Macaw, the Eastern Rosella, the Budgerigar and the Cockatiel.

The Illiger’s Macaw (Ara illiger) is illustrated on the stamp with the face value of 1.60 lei. It may be encountered in the Central and Eastern part of South America. The length of its head and tail reaches 46 cm. It has a big head, a strong beak and a long tail. The body plumage is green, the head plumage is blue and the abdomen is pink-reddish. Its face is white, the beak is black and its iris is orange. The feathers on the wings edges are bluish-blackish. It is extremely intelligent and easily tamed. It is not very noisy, but it is very sociable and talkative. It is a rare species.

The Scarlet Macaw (Ara macao) is illustrated on the stamp with the face value of 2.10 lei. It may be found in Southern Mexico, up to Brazil and Peru. The body length is 85-95 cm, of which half is tail’s length; it weighs about 1 kg. It has a strong beak. Its plumage is mostly scarlet and the sides of its back and its tail are blue. The upper sides of the wings are yellow, with blue flight feathers, as well as the tail. The undersides of the wings and tail are blue with metallic gold iridescence. Some individuals also have green feathers.

The Yellow-collared Macaw (Primolius auricollis) is illustrated on the stamp with the face value of 2.40 lei. It is found in Northern Argentina, in Brazil up to Eastern Bolivia.

Its length is up to 40 cm, of which the tail represents 59%. It has a green plumage with a yellow collar that is wider on the back part of the neck. The head color is blackish-brown. The feathers on the wings edges are blue and those from the tail are red at their basis, green in the middle and blue at the extremity. The ventral part of the tail is green-yellowish. Its legs are pink and its iris is reddish-yellowish. It has got a black beak sometimes with a grey end. It is an affectionate, clever and ingenious parrot.

The Eastern Rosella (Platycercus eximius) is illustrated on the stamp with the face value of 4.70 lei. Native to Southeastern Australia, it lives both in the wooded pre-mountainous areas and in savannas. The wings, as well the body, are 16 cm long. Its fan-like feathers are blue and the ones on its back are black with a yellow-greenish contour.

The Budgerigar (Melopsittacus undulatus) is illustrated on the stamp with the face value of 5.00 lei. This parrot is native to Australia and it was brought on the old continent several hundred years later than any other parrot species. Their “song” goes from the slow chirp to the high-pitched alarm shout that may be heard from more than 500 m.

The Cockatiel (Nymphicus hollandicus) is illustrated on the stamp of the souvenir sheet with the face value of 9.10 lei.

It is native to Australia. After 1850, the Europeans started to colonize Australia and immediately afterwards these parrots were brought to Europe. It measures about 40 cm. They are some of Australia’s fastest birds.

We kindly thank “Grigore Antipa” National Museum of Natural History and the Bucharest Zoological Garden for the documentary assistance granted in the accomplishment of this postage stamps issue. 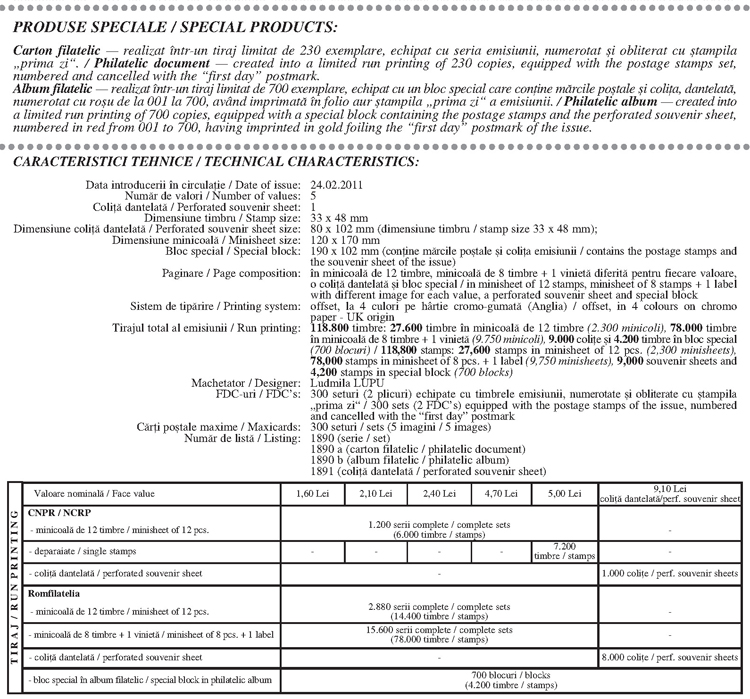