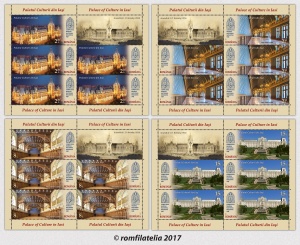 The Palace of Culture in Iasi was built between 1906 and 1925, as the Palace of Justice and Administration, after the plans of architect I.D. Berindey, and gained a reputation by its remarkable size. Powerfully marking the architecture of the old capital of Moldavia, the palace imposed itself since its appearance on the skyline, and its role as a true cultural effigy of the city is recognized by Romfilatelia through the postage stamp issue “Palace of Culture in Iasi”.

The building’s façade, depicted on the stamp with the face value of Lei 2.20, which reaches 55 meters high through the central tower, made the palace be the tallest building in the city at the time. Beyond architecture, the Palace of Culture’s clock tower has particularly contributed to the fame of the building by reminding of the clock installed in the gate tower of the Royal Court, in 1728, which gave the city its rhythms for a long time.

The palace in the centre of Iasi was designed in the spirit of communal palaces in Western Europe and is a fortunate combination of several architectural styles: Neo-Gothic, Romantic and Neo-Baroque. Apart from its monumentality and beauty, the building distinguished back then by its modern facilities and technical equipment, purchased in Germany, as well as through the hardware made by Haug House and the renowned French firms Krieger, Mericier and Bagvčs. The Neo-Gothic furniture was designed and made in the famous Albert Goumain workshops, in Paris, and by the Mappel Company in England.


Voivode hall, illustrated on the stamp with the face value of Lei 2.50, located upstairs, is the most beautiful and monumental room of the palace, being decorated distinctly from the other rooms. The name of the room is due to a famous gallery of portraits of the rulers of Moldavia, preceded by the Dacian and Roman ancestors of the Romanian people, Decebalus, Emperors Traian and Aurelian, going into the forefathers of the medieval Moldavian state and continuing the series of rulers up to King Carol II.

In the western area of the hall is a monumental marble fireplace, decorated with a bas-relief representing a “historical tree” decorated with portraits of the most important rulers of Moldavia, which is dominated by the portrait of King Ferdinand.  During the time the building in Iasi was the Palace of Justice and Administration, the “Henri Coanda” room, illustrated on the stamp with the face value of Lei 8.00, was intended as a Jurors Court. The central location and special decorations underline the outstanding significance of the room.

The stucco at the top of the hall is the work of Emil Wilhelm August von Becker, sculptor of the Royal House of Romania. We know that the architect I. D. Berindey, who presided over the “H. Coanda” Technical Products Society, called for the discovery of a cheaper material to imitate the texture and tone of oak. This material was invented by Henri Coanda (named by the famous inventor bois-cement) and is found in several rooms of the palace. Also noteworthy is the fact that the source of inspiration in achieving this hall’s ceiling was Westminster Hall in London, where the Parliament of the United Kingdom was born.

In the first period of building, the style used was sober and severe, in the second stage the ornaments were multiplied, and decorative elements were marked heavily by the Baroque style: the composite capitals, rounded consoles decorated with floral and vegetal elements, or simple elegant Neo-Classical consoles, decorative friezes with vegetal, floral or zoomorphic elements, and many heraldic shields, with historical heraldry significance, some just decorative. Of course the second stage was preferred by Berindey, being a great architect of details, who excelled in their achievement. The cantilevered balcony has been designed with a fretted railing with rounded balusters and decorated with a frieze with zoomorphic elements.  The First World War and the difficult years that followed delayed its full completion for many years, making the official inauguration take place only on October 11th, 1925, in the presence of the Royal Family, King Ferdinand and Queen Marie.

In 1955, the old Palace of Justice became the Palace of Culture, its image reproduce on the stamp with the face value of Lei 15.00, hosting some of the most important cultural institutions of the country, united today under the name the “Moldavia” National Museum Complex in Iasi, which includes four national rank museums: Museum of the History of Moldavia, the “Stefan Procopiu” Museum of Science and Technology, the Ethnographic Museum of Moldavia, the Art Museum, as well as the Research and Conservation – Restoration Center of Cultural Heritage.

Romfilatelia thanks the “Moldavia” National Museum Complex in Iasi for their documentary support granted in the creation of this postage stamp issue. 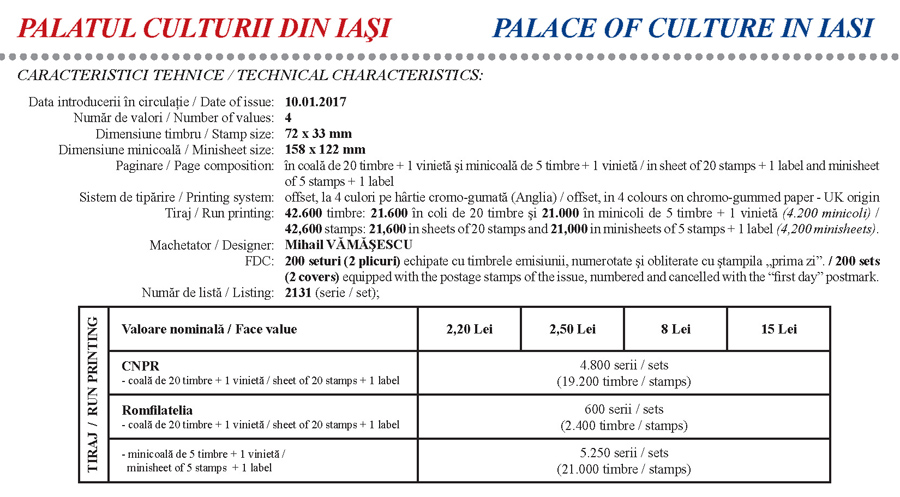