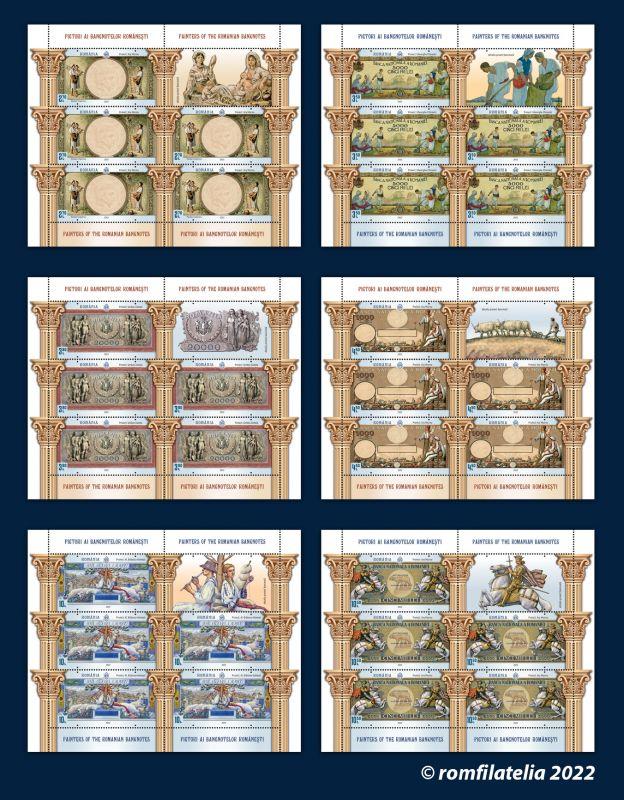 Romfilatelia intoduces into circulation on Friday, May 20th, the postage stamps of a philatelic topic registered as national premiere unde the title “Painters of the Romanian banknotes”.

The images illustrate the concepts and artistic ways of illustrating the fiduciary message that Banca Națională a României wished to convey to the population through banknotes that were scheduled to be issued during the years 1929-1947.

Starting with the third decade of the 20th century, the management of Banca Națională a României is consistently concerned with extending the modernization of the technical equipment related to the printing of banknotes, meant to achieve the polychrome reproduction of their images. At the same time, Banca Națională a României, in parallel with the use of the means of securitization of the press, accepts a freedom of artistic expression of the fiduciary message that the institution wanted to transmit to the population. As a result, the iconography of banknotes is beginning to reflect the approach of representations related to local culture, traditions and civilization.

The drawings of the banknote drafts, reproduced on the postage stamps of the issue “Painters of the Romanian Banknotes”, belong to the artists Nicolae Grigorescu, Ary Murnu, Gheorghe Chirovici, Alexandru Brătescu-Voinești (son of the writer bearing the same name) and Șerban Zainea.

Nicolae Grigorescu (1838-1907), a great master of the Romanian brush, illustrated in his paintings the result of the symbiosis between the realism of the Barbizon School, Impressionism and Symbolism. He is the first plastic artist whose merits are rewarded with the title of honorary member of the Romanian Academy.

Present in Paris (1861) at the School of Fine Arts, he has Pierre August Renoir among his colleagues. Later, he completed his artistic education with the painters from Barbizon. He is the first front-line painter reporter of Romania during the War of Independence (1877-1878) together with the first front-line photojournalist, Carol Popp of Szathmári. The writer Alexandru Vlahuță speaks in a defining manner about the approach of the subjects of Grigorescu’s paintings: “I don’t know if there is any country in the world whose picturesqueness is so clearly and strongly reflected in the work of an artist”.

The postage stamp image with face value of Lei 2.70 optimistically and romantically depicts the “female peasants” of the national painter, at the harvest of the rich orchards of Argeș. The graphic layout belongs to the designer Ary Murnu.

Gheorghe Chirovici (1883-1968), painter, drawer and maker of religious frescoes. He had a short apprenticeship with Italian church painters, choosing his own artistic path after giving up his studies at the School of Fine Arts in Bucharest. In his creations, he was visibly influenced by Nicolae Grigorescu’s style, especially addressing the religious spirituality of the Romanian peasant. He had a great success with the public of the time, a traditionalist public. Among the buyers of his works was the Royal House of Romania. He was an important representative of poster art in Romania. He has also excelled in public space design, theatre and opera sets. He is also known as a postage stamps and banknotes designer.

The image of the postage stamps with the face value of Lei 3.50 reproduces the template of a banknote in which the drawing illustrates aspects of the work of the field and of the gathering of the fruits of the land in the conditions of a rudimentary agriculture.

Gh. Chirovici is present in the world of postage stamps with two issues: 50 Years of independence and Air Mail (1931).

Șerban Zainea (1907-1990), a graduate of the School of Fine Arts in Bucharest, had Camil Ressu as his teacher. He became known to the public on the occasion of his first solo exhibition in 1928 at the Official Graphics Salon. In 1934, he left for Italy where he became a student at the Academy of Fine Arts in Florence. Returning to the country in 1936, after being employed at the Stamp Factory, he was sent to Vienna to specialize in drawing and engraving.

For almost three decades, since 1940, he has worked at Banca Națională a României, dealing mainly with banknote and postage stamp drafts. Among his exceptional achievements, it is worth presenting the first issue of Romanian postage stamps made in the engraving technique (intaglio or taille-douce), put into circulation in 1955 with the theme “Great Cultural Anniversaries”. The postage stamp with the portrait of Schiller was considered by the German magazine “Die Sammler Lupe” as one of the most beautiful postage stamps. During his activity, he made over 100 postage stamp templates, of which 20 images were made by hand engraving.

The image of the draft banknote presented on the postage stamp with a face value of Lei 3.80 allegorically presents the field of field work in a composition in which the young woman, mother with child, are represented symmetrically in the whole composition together with two men equipped with tools specific to field work. The designer also deliberately highlights the beauty of national folk costumes.

Ary Murnu Gheorghiades (1881-1971), known especially as Ary Murnu, painter and graphic artist, was the father of the sculptor Ion Lucian Murnu and the younger brother of the writer and historian George Murnu (member of the Romanian Academy). He attended lower and upper secondary school in Budapest, after which he enrolled at the Kunstakademie in Munich. He then studied fine arts between 1902 and 1904 in Iaşi and Bucharest.

Was known Ary Murnu’s passion for the writings of the poet Mihai Eminescu metarialized by the illustrations belonging to several poems (The Morning Star, Călin, Prince Charming of the Linden Tree, Down Where the Lonely Poplars Grow, etc.).

He had numerous collaborations with the National Bank of Romania, both by presenting his own drafts and by drawing graphic templates that summed up details of the painter Nicolae Grigorescu.

The postage stamps with the face values of Lei 4.50 and Lei 10.50 present an allegory in which agriculture and industry are found as themes of the economy of the time, respectively the battle portraits of the great rulers Michael the Brave and Stephen the Great.

Alexandru Brătescu-Voinești (1897-1995), painter and graphic artist, was the son of the writer known by the same name. He studied painting in Paris between 1921 and 1926. He is known as a talented book illustrator. Unfortunately, no details are known about his biography. He made illustrations for books and murals and is known as the author of several postage stamp and banknote drafts. The collaboration with philately is found in the layout of two postage stamp issues: “Industrial Plants” (1955) and “Forest Month” (1956).

The image of the postage stamp with a face value of Lei 10 reproduces the template of the painter which emanates the idyllic atmosphere of the pastoral areas found in the beauty of the mountain pastures.

Romfilatelia thanks the representatives of Banca Națională a României and National Bank of Romania Printing Works for the documentary and photographic support provided to the development of this postage stamps issue. 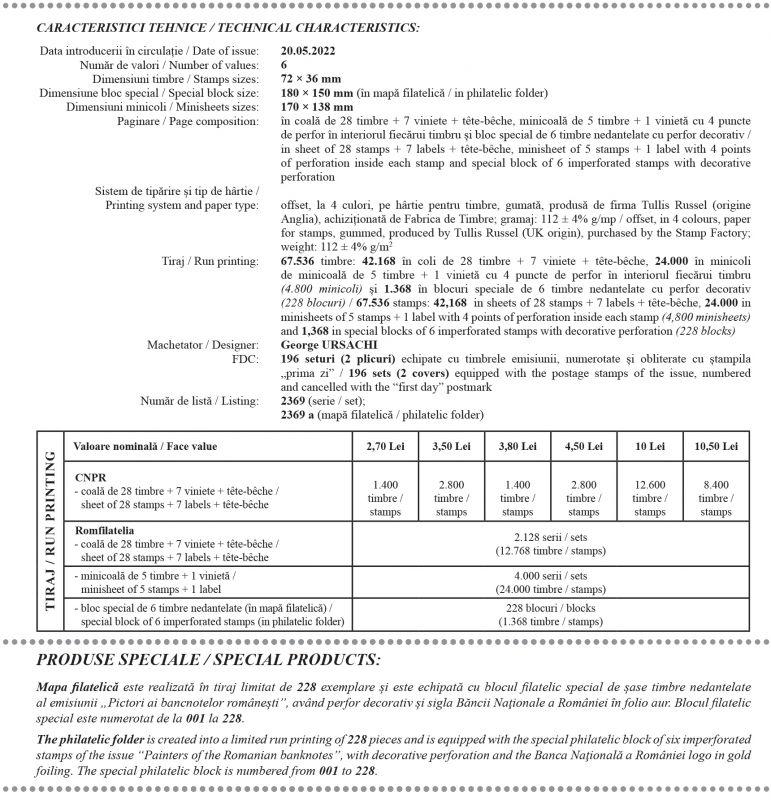