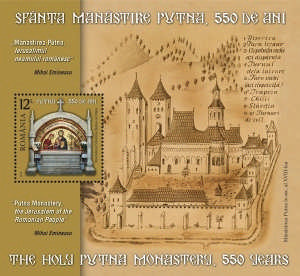 2016 marks a beautiful anniversary of one of the most well known and visited Romanian monastic settlements – Putna Monastery, the first and most important foundation of St. Stephen the Great, which guards the legendary land of Bukovina for over five centuries.

Marking also from a philatelic point of view the anniversary of 550 years since laying the cornerstone of the Putna Holy Monastery, Romfilatelia offers to collectors and not only a special postage stamp issue, which can be metaphorically seen as a „ticket” to the show of history and those who have built it for us, their descendants.

Suggestively entitled The Putna Holy Monastery, 550 years, the postage stamp issue is dedicated to the one called by the great national poet Mihai Eminescu the Jerusalem of the Romanian people”, that place where the national history, culture and spirituality blend harmoniously for centuries and where visitors find a spiritual establishment with impresive treasures of religious art. The philatelic elements of the anniversary issue can be purchased starting with Tuesday, July 5th, 2016, in Romfilatelia’s stores in Bucharest, Bacau, Brasov, Cluj-Napoca, Iasi and Timisoara.

Ruler Stephen the Good, when they started to build the Putna Monastery, shot a bow from a mountain top near the monastery. And where his arrow reached, there the communion table in the altar was laid”, noted chronicler Ion Neculce for posterity, revealing how the place was chosen, where on July 10th, 1466 was laid the monastery’s cornerstone.

The ruler’s name is connected to more than 40 monasteries, being the greatest founder of places of worship in Moldavia and a strong defender of Christianity, for which he was named the Athlete of Christ” and was canonized by the Holy Synod of the Romanian Orthodox Church in 1992.

Stephan the Great is often commemorated in the Romanian philately, where he is portrayed either by himself or through his numerous achievements. We mention in this regard the postage stamp issue Faithful Voivode Stephen the Great and Saint, from 2004, which marked five centuries since the ruler’s death.

The anniversary postage stamp issue The Putna Holy Monastery, 550 years thus joins the projects linked to the ruler’s name. With two dedication days, the historical one – the Dormition (Assumption) and the second one received in 2010 – the holy celebration of its founder, on July 2nd, the Putna Monastery is a place so filled with national history and consciousness, that none of the visitors crossing its threshold leaves the settlement without also passing by its founder’s tomb.

Although, at the beginning the monastery was destined as the necropolis of the ruler’s family, after the passing of St. Stephen the Great, his grave at Putna became a place of worship for all Romanians, where a silver votive is alight for centuries, spreading the light of love for God and love of country.

The stamp with the face value of lei 3 presents a graphic composition representing the image of an aquatint etching by Antoine Kaindl, 1927, joined by an icon painted in Putna’s workshops, which portrays Stephen the Great, holding in his hand the model of the monastery. The second stamp, with the face value of lei 15, illustrates a current image of the monastery, more precisely the monastery’s church housing today three royal tombs: Stephen the Great, his son, Bogdan III, and his nephew, Stephen the Younger – Prince Stephen.

The stamp of the souvenir sheet, with the face value of lei 12, depicts the Stephen the Great’s tomb next to a watercolour of Putna Monastery in the 18th century, which completes the border of the souvenir sheet. Also, on the minisheets’ labels are reproduced an anonymous painting, 18th century, depicting the Putna Monastery after the reconstruction of Metropolitan Iacob Putneanul, the great second founder of the settlement and respectively, a chromolithography after a watercolour by Franz Xavier Knapp, 1870.

The issue is completed by a first day cover and a set of 2 maxicards, and as page composition were used the sheet of 32 stamps, the minisheet of 5 stamps + 1 label, the perforated souvenir sheet and the special block complete series” (in philatelic album).

The special product of the issue the philatelic album, created into a limited edition of 245 pcs. and equipped with the block of 3 stamps (the stamps of the issue and the stamp of the souvenir sheet) and the first day cover having the first day” postmark clearly imprinted in gold foiling. Both products are numbered from 001 to 245.

Romfilatelia thanks the Putna Holy Monastery for the documentary support granted in the creation of this postage stamp issue.