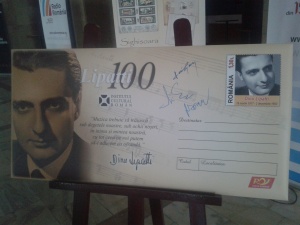 On Sunday, January 15th, 2017, Radio Hall hosted the extraordinary concert Lipatti 100, an event celebrating the centenary of the great pianist and composer, organized by Radio Romania and the Romanian Cultural Institute. The concert was supported by the National Radio Orchestra, having as guests the soprano Teodora Gheorghiu and the pianists Sergiu Tuhutiu and Matei Rogoz, under the baton of Cristian Orosanu.

Romfilatelia joined the event as partner, creating a postal stationery on this occasion. The philatelic project honours the personality of Dinu Lipatti, a precious artist of the Romanian culture and an excellent representative of national and universal music, marking at the same time an important celebration of Romanian nation and identity: National Culture Day.

The event gathered guests from the Romanian cultural, political and social environment, such as: Ioan Vulpescu, Minister of Culture and National Identity, Sergiu Nistor, Presidential adviser, Daniel Sandru, Secretary of State, Centenary Department within the Ministry of Culture, Irina Sanda Marin Cajal, Undersecretary of State at the same ministry, as well as mass-media representatives and other guests.

The event started with a series of speeches delivered by Ioan Vulpescu, Minister of Culture and National Identity, Ovidiu Miculescu, President Director General of the Romanian Radio Broadcasting Society and Radu Boroianu, President of the Romanian Cultural Institute.

Ovidiu Miculescu, President Director General of the Romanian Radio Broadcasting Society, opened the series of speeches, saying that: “Romanian Radio Broadcasting Corporation has, from this point of view, a unique profile among public radio stations in Europe. We are a strong cultural actor in the Romanian and international cultural and media environment, and our projects developed at and beyond the microphone represent real platforms for supporting the Romanian creative industry in almost all cultural fields, from music to radio drama, from written culture, to national and international tours.”

„It’s an important evening on radio. There’s a vibrant movement around the date of January 15th. The Ministry of Culture, the Romanian Cultural Institute, all other important cultural institutions in the country organize events. It is Dinu Lipatti’s centenary and I think we have a moral obligation to do as many things as possible in Dinu Lipatti’s memory in the year hosting the George Enescu Festival.”, added Ioan Vulpescu, Minister of Culture and National Identity.

Radu Boroianu, President of Romanian Cultural Institute, thanked Romfilatelia for its involvement and the “extraordinary postal stationery” created to mark the anniversary of the talented pianist Dinu Lipatti, speaking about the centenary and the importance of celebrating Romanian and universal values. Moreover, the president also announced the first great European project of the Institute, which will be dedicated to Latin: “The young age and extreme fragility of which both Eminescu and Lipatti left us, the high value and echo of their genius associate them with great Romanian and universal values, along with Constantin Brancoveanu, Dimitrie Cantemir, Spataru Milescu, Nicolae Iorga, Constantin Brancusi, Henri Coanda, Gogu Constantinescu, George Enescu, Ioan Luca Caragiale or Lucian Blaga, Anghel Saligny or Ioan Andreescu and Ion Tuculescu, Grigore Moisil and Solomon Marcus, Victor Babes and Ion Cantacuzino, Constantin Noica and Stefan Lupascu or Matilda Ghyka.  As a sign of respect for all of them, I am launching today, in your presence, the first great European Project of the Romanian Cultural Institute under the name ‘Latin, the first European Institution’.“

The evening program included works belonging to the musician Dinu Lipatti, the atmosphere being completed by lyrical moments of Mihai Eminescu, recited and performed by the beloved actor Ion Caramitru.

Committed to its mission of being a real messenger of authentic national values, Romfilatelia marked this double event – National Culture Day and the Lipatti centenary – by issuing an anniversary postal stationery. The graphic composition of the envelope incorporates the portrait of the famous pianist and composer Dinu Lipatti, visually supplemented by a representative quote of the great artist: “Music must live under our fingers, our eyes, in our hearts and minds with everything we can offer as homage.”

Throughout the event it was exposed a giant envelope, a replica of the anniversary postal stationery, which could be admired by all participant of the event. To reinforce the significance of this philatelic project, the postal stationery was signed by the president of the Romanian Cultural Institute and the president director general of the Romanian Radio Broadcasting Society, who took pictures next to the philatelic product.

The event ended with a cocktail, all the special moments of the evening creating and sharing emotion and warmth to the guests.