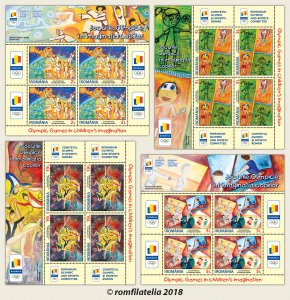 Romfilatelia supports and promotes the Olympic spirit and the values of the Olympism among the young talents in the school environment by introducing into circulation the Olympic Games in the imagination of children postage stamp issue.

The National Painting, Graphics and Drawing Competition, entitled “The Olympic Games in the Children’s Imagination”, is organized every year by the Romanian Olympic and Sports Committee (R.O.S.C.) through the Romanian Olympic Academy (R.O.A.), in partnership with the Ministry of National Education (M.N.E.). The competition, organized in two phases, namely at county and national level, can be found in the Calendar of School Competitions. Structured on three age categories – 6-10 years old, 11-14 years old and 15-18 years old, the competition is addressed to the school and high school students.

In terms of theme, the works of the participants address the Olympic spirit or one of the values of the Olympism – excellence, friendship, fair play, tolerance, joy, balance between body and mind, etc. The most valuable works are exhibited at the Sports Museum, on the official website of R.O.S.C. (Romanian Olympic and Sport Committee) and R.O.A. (Romanian Olympic Academy), in the Informational Bulletin of the Romanian Olympic Academy entitled the “Olympic Spirit”, but also in other specific prints.

For the four postage stamps, the winning drawings were selected at the National Competition of Fine Arts, belonging to the three age categories, as follows:

The work entitled Chromatic Dynamics, signed by the student Roman Gabriel of the “Ciprian Porumbescu” Arts High School in Suceava, illustrates the stamp with the face value of LEI 2. The drawing, belonging to the 15-18 years old category, appreciated by the jury with the First Prize, presents scenes of certain sports such as fencing, gymnastics, weightlifting, swimming, archery etc.

From the 6-10 years old category, the work entitled Tennis was selected to illustrate the stamp with the face value of LEI 3, by author Fluerasu Sofia from Palatul Copiilor (Children’s Palace) in Craiova, awarded with Honourable Mention.

On the stamp with the face value of LEI 5 is illustrated the drawing entitled Young hopes, by author Adumitroaie Anna Rocsana from “Stefan Luchian” Arts High School in Botosani. The work was awarded with Honourable Mention, it belongs to the 11-14 year old category and gives impressive images of fencing, gymnastics, canoeing and volleyball.

The Grace and Elegance drawing, belonging to the student Aveloiu Diana from the Sports High School in Targu Jiu, is shown on the stamp with the face value of LEI 19. The work, participating in the 11-14 years old category, was rewarded by the jury of the competition with Honourable Mention. This illustrates, as its title suggests, the grace of the elements in gymnastics.

On the “first day” cover of the issue it is illustrated the drawing entitled The Ancient Rome, by the author Dretcanu Raluca Ioana from the “Stefan Luchian” Arts High School in Botosani. The work reproduces the most famous work of the Greek sculptor Myron, Discobolus, also known as the Discus Thrower.

Romfilatelia thanks the Romanian Olympic and Sports Committee (R.O.S.C.) for the documentary support granted for the creation of this postage stamp issue. 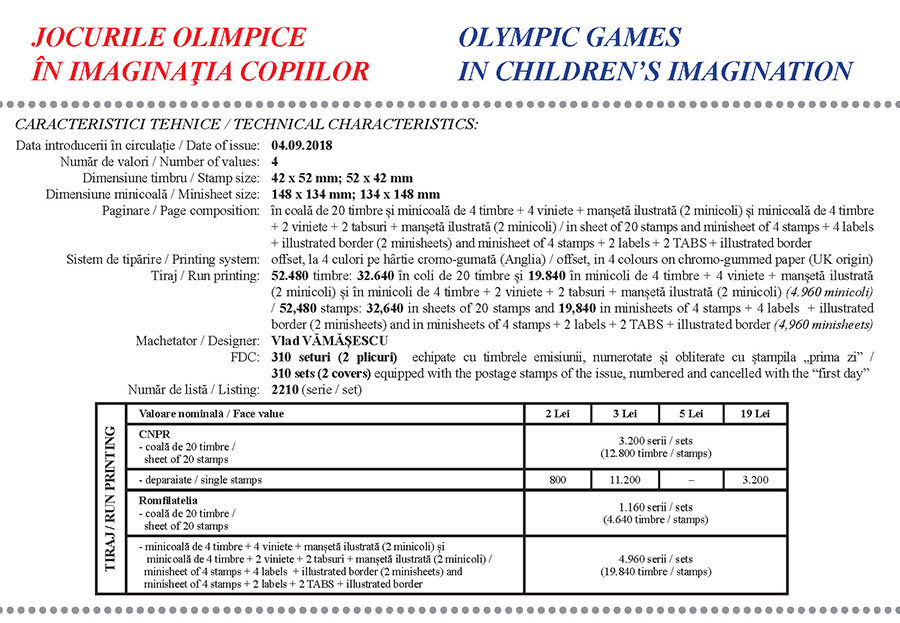