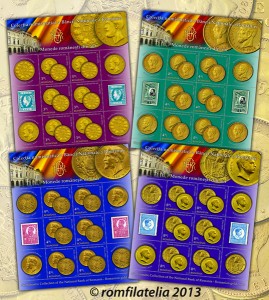 The coin is one of the symbols of a country’s sovereignty, along with the flag, the coat of arms, the anthem and the stamp. The National Bank of Romania, the sole institution inRomaniavested with the power to issue legal tender, holds a valuable historical and artistic heritage exceeding by its significance the mere material considerations and representing riches of the Romanian culture and tradition.

Focusing on the beginnings of the national monetary system as a historical theme, Romfilatelia introduces into circulation the postage stamps issue entitled “Numismatic collection of the National Bank of Romania – Romanian gold coins” consisting of four stamps depicting coins with the face value of lei 20 (pol), issued between 1870 and 1939, in view of being put into circulation or marking important events: the 40th anniversary of reign (1906), the centennial of the birth of King Carol I (1939) and the Coronation in Alba-Iulia (1922).

The introduction of the national currency was the fulfilment of one of Romania’s objectives, a country on its path towards modernisation. It was a symbolic affirmation of independence before the country acquired this statute following victories on the battlefield and gained recognition by international treaties.

In 1867, the Law on the setting up of a new monetary system and the manufacturing of national coins was passed. On 24 February 1870, the first State Mint was opened, being located where the building of the Romanian Peasant Museum on Kiseleff Road today stands.

The mint started operations by manufacturing two types of coins: gold coins with face value of lei 20 (5,000 coins) and silver coins with face value of leu 1 (400,000 coins). The obverse of the coins shows the effigy of King Carol I and the inscription “CAROL I DOMNUL ROMANIEI”(Carol I Ruler of Romania) and the reverse depicts the face value and the year of issue inside an oak and laurel wreath standing for the ancestors’ bravery and glory.

These two issues have also symbolic value, since they were minted prior to gaining independence and had the ruler’s effigy on their obverse, despite opposition from the Ottoman Empire.

On the occasion of the 40th anniversary of reign of King Carol I, a commemorative coin issue was minted. It was made up of seven coins, of which the leu 1 and lei 5 were made of silver and those of lei 12½, lei 20, lei 25, lei 50 and lei 100 of gold. The Royal Mint of Belgium was commissioned to strike the coins and the scale models and moulds were designed by Alphonse Michaux, its chief engraver.

The effigy of King Carol I is pictured on both obverse and reverse of the leu 1, lei 5, lei 20 and lei 100 coins in two versions. The obverse shows the king’s 1906 portrait surrounded by the inscription “CAROL IREGE AL ROMANIEI 1866-1906” (Carol I King of Romania 1866-1906) and the reverse depicts his 1866 portrait, the circular inscription “CAROL I DOMNUL ROMANIEI” (Carol I the Ruler of Romania) and the face value.

In 1927, amid the events dedicated to the 5thanniversary of the Coronation of King Ferdinand I and Queen Marie in Alba-Iulia, the issue of commemorative gold coins was decided. Although the project was initiated in early 1927, it was finalised as late as 1928. Marcel Dammann, a renowned French medallist, designed the scale models and moulds.

The issue consists of four coins: lei 20, lei 25, lei 50 and lei 100. The obverse of lei 20 and lei 100 coins shows King Ferdinand wearing a laurel wreath, with the inscription “FERDINAND I REGELE ROMANILOR 1922” (Ferdinand I King of Romania 1922) and the reverse depicts the country’s coat of arms (the middle shield), the inscription “ROMANIA” and the face value of lei 20 lei and lei 100, respectively. The lei 25 and lei 50 coins have on both their sides the crowned effigies of King Ferdinand and Queen Marie. On the obverse, the king’s portrait is surrounded by the inscription “FERDINAND I REGELE ROMANILOR” (Ferdinand I King of Romanians), together with the face value of the coin, and on the reverse the queen’s effigy is accompanied by the inscription “MARIA REGINA ROMANILOR 1922” (Marie Queen of Romanians 1922).

The Royal Mint in London was commissioned to mint the coins, which reached Bucharest in August 1928.

In line with the tradition of the 1906 and 1927/1928 commemorative issues, the National Bank of Romania initiated a gold coins issue consisting of six coins in 1937. Launched two years later, it was dedicated to the centennial of the birth of King Carol I, although none of the coins shows his portrait.

The projects were assigned to sculptor and medallist Emil W. Becker, a collaborator of the State Mint (re-established in 1935) who drew up 60 projects for this purpose. King Carol II himself selected the 12 projects for the scale models and moulds.

The 1939 issue contained two versions of lei 20 and lei 100 coins and two large coins without face value referred to as “decorative gold coins” equivalent to 12 ducats. The obverse of the four coins shows the effigy of King Carol II and the inscription “CAROL II REGELE ROMÂNILOR” (Carol II King of Romanians). On the reverse, the country’s coat of arms is shown in four different compositions, together with the inscription “ROMANIA”, the face value (lei 20 and lei 100) and the year of issue:1939. On the obverse of the “decorative gold coins”, King Carol II is portrayed on horseback in his royal escort uniform. On the reverse, the small coat of arms of the Romanian Kingdom is shown next to the image of the She-wolf (Lupa Capitolina) in the first version and next to the image of a mower in the second.

Most of the 1,800 coins of this issue (300 coins of each model) were offered to high ranking officials and close friends of the Royal Family. An issue having a similar composition and dedicated to the 10th anniversary of reign of King Carol II was launched in 1940. The mintage of each version was 500 coins.

We bring our thanks to the National Bank of Romania Board for the support granted in the accomplishment of this postage stamps issue.
Issue date: 2013-07-26 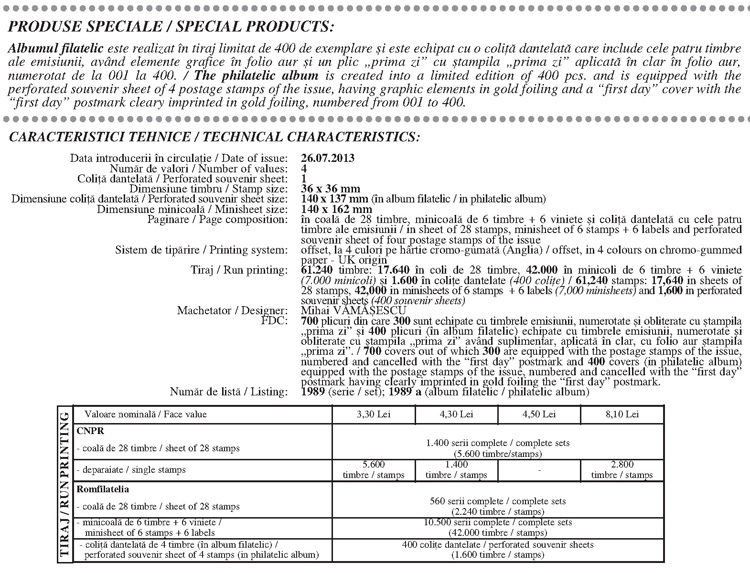