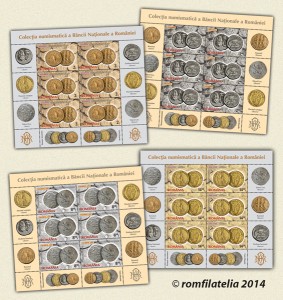 On the postage stamp with the face value of lei 2.00 there is an illustration of the Koson – the only Dacian gold coin known so far.

First mentioned in the 16th century by Erasmus of Rotterdam, the Koson-type coins are one of the most interesting chapters in Romanian numismatics.

“Koson” is, above all, the name given to a gold coin weighing about 8.5 g, with a diameter between 18 and 22 mm. The coin bears on one of its sides an eagle turned to the left, on a sceptre, with a wreath in the right claw, and on the other side three men, a consul between two lictors walking to the left, and the legend ΚΟΣΩΝ in Greek within the exergue. Most coins have a monogram in front of the first lictor.

Over time, Koson-type coins were thought to have very different origins. Since the representations on both sides of the coins are inspired by the reverses of two Roman Republican denarii issued in 73 BC and in 54 BC, and almost every known discovery was made in Transylvania, most numismatists and historians consider Koson-type coins to have been struck under the rule of a homonymous king of Dacia in the second half of the 1st century BC.

The numismatic collection of the National Bank of Romania contains 211 pieces of this kind, coming from an impressive hoard unearthed very close to Sarmizegetusa Regia, the capital city of ancient Dacia, in 1996.

The oldest silver coins on the territory of nowadays Romania were minted at Istros (Histria), an important trading center on the Western coast of the Black Sea. On their obverse were depicted the heads of two young men, one being inverted, while on the reverse we can see the city emblem, the eagle on the dolphin, together with one of the following legends: IΣT, IΣTP or IΣTPI. During the 4th and 3rd centuries BC, Istros minted a large amount of coins of this type, differing from the first issues in quality and style, the legend IΣTPIH and the letters or monograms that appear on the reverse.

In the National Bank of Romania’s numismatic collection, there are some coin hoards consisting of Istrian Drachms discovered in Dobrogea, one of these being depicted on the postage stamp with the face value of lei 2.40.

The image of the Thaler, the ancestor of the Romanian currency (Leu), is represented on the postage stamp with the face value of lei 8.10. Starting with the 16th century, it began to circulate over the entire European territory. In the Romanian Principalities, the thaler circulated in a variety of typological variations. It was especially the leeuwendaalder (lion-thaler) issued in the United Provinces of Netherlands that was the most widely spread. In the Romanian Principalities, it was simply called the “Taler-leu” (Lion-thaler), and thereafter it was given the name of “Leu” (Lion).

The leeuwendaalder (lion-thaler) , whose reverse illustrates a lion on its hind legs, was so popular, that the notion of “lion” (leu) was assimilated to that of currency (coin); thus, in Moldavia and Wallachia, it remained in the collective memory as the standard currency even after disappearing from circulation. Although until the enactment of the Monetary Law in 1867, current payments were made in currencies with different values and backgrounds, at a predetermined rate, in local exchange relations, the computing “Leu” has emerged as the standard currency. Thus, the “Leu” would naturally be assigned the role of national currency by law, the first silver coins with the face value of Leu 1 being minted three years later. The coin has on the obverse the effigy of King Carol I and the circular legend “CAROL I DOMNUL ROMANIEI” (Charles I Prince of Romania), and on the reverse, in a wreath of laurel and oak leaves, “1 LEU 1870”.

The hoard unearthed in the vicinity of Galati, belonging to the numismatic collection of the National Bank of Romania, comprises 92 lion-thalers issued by the United Provinces of the Netherlands, as well as by the imperial cities of Campen and Zwolle between 1604 and 1653.

The Gold Ducat of Venice is represented on the postage stamp with the face value of lei 14.50. In the Middle Ages, many foreign gold coins circulated in Wallachia and Moldavia. Between the 14th – 16th centuries, especially towards the end of this period, while the Romanian Principalities stopped minting their own coins, the Byzantine hyperpyron, the Venetian and  Hungarian ducats became widely spread. Even though from the 16th century the source of gold issues diversified, the gold ducat minted in Venice, also known as the sequin or zecchino, kept its role previously acquired. Together with the Dutch ducats, and those issued in Hungary and the Holy Roman Empire, the Venetian ducat continued to dominate the high-value currency movements until the 18th century.

The National Bank of Romania’s numismatic collection contains a coin hoard consisting of Venetian ducats from the 17th and 18th centuries.

Romfilatelia thanks the Issue, Treasury and Cash Management Department within the National Bank of Romania for the docummentary and photographic support granted in the accomplishment of this postage stamp issue. 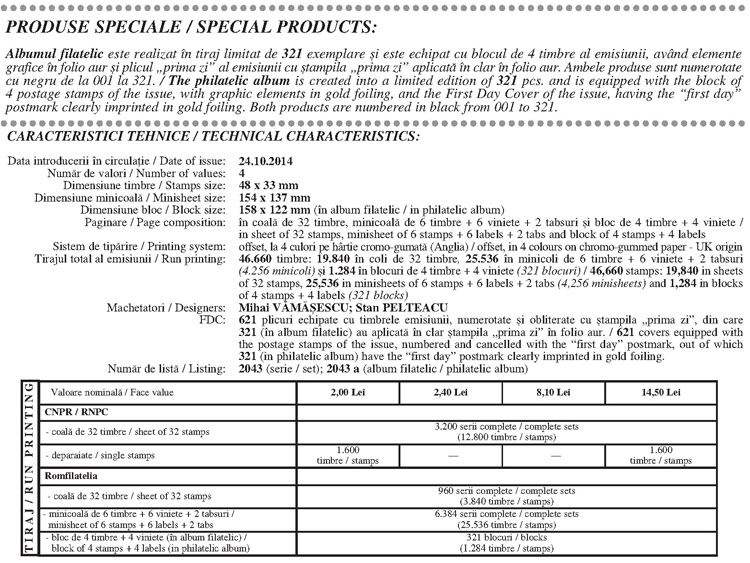