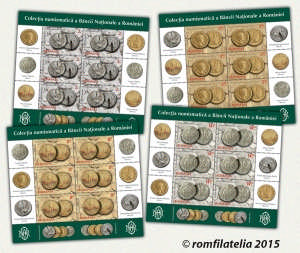 in order to showcase a more complete picture of the monetary circulation in the Romanian territory. Romfilatelia dedicates to this valuable collection a new issue of stamps which comprises four values, with the title Numismatic collection of the National Bank of Romania, Coin Hoards (II).

Continuing the series of the project launched in 2014, the stamps of the new issue are illustrating Dacian silver coins, Roman imperial gold coins, Polish silver coins and Dutch ducats.

The stamp with the face value lei 2.00 illustrates the Dacian silver coins. They have known a variety of types, the prototype being the Macedonian King Philip IIs (359-336 BC) tetradrachms, especially those issued posthumously, which had on the obverse the effigy of Zeus wearing a laurel wreath, and on reverse a rider and the name of the Macedonian king. The first monetary series retains many key features of the original representations as well as parts or just letters of the inscription. Gradually, however, the intrinsic value of Geto-Dacian silver coins began to drop, common metal alloy becoming predominant. In the first century BC, representations that appeared on these coins were already mere rendering, not preserving elements of inscription.

A coin hoard discovered in Bukovina can be found in the NBRs numismatic collection, consisting of the Husi – Vovriesti type coins. The main feature of these artifacts dated to the 3rd century BC, is the presence of the reverse cuts.

Roman imperial gold coins are represented on the stamp with the face value lei 2.40. The Roman imperial monetary system was created by Augustus (27 BC -14 AD). He was the one to return to the gold-silver system established by Caesar. In this context, the weight of the golden aureus was set at about 8 g, and that of the denarius to about 4 g, with an exchange rate of 1 aureus = 25 denarii. Among the monetary discoveries from Dacia province golden aurei appear sporadically, a sign that their day to day use was possible. However, being coins with high intrinsic value, their owners paid more attention to them than to pieces of silver and bronze.

The Pitesti coin hoard, composed of gold coins from the time of Emperor Gordian III (238-244), found in the numismatic collection of NBR, is the largest hoard of aurei discovered so far in Romania.

The Dutch ducat is represented on the stamp with the face value of 8.10 lei. The Organic Statutes attempted for the first time the unification of the Romanian Principalities monetary courses by instituting two standards, both based on a unit of account called leu, divided into 40 para. The standard for gold was the Dutch ducat, valued at 31 lei and 20 para, while the standard for silver, represented by the 20 kreuzer (sfan?), was worth 2 lei and 10 para.

Within the numismatic collection of the NBR is kept a coin hoard, dating back to the first half of the 19th century, found in the Mihaiesti village, the Hodoroceni commune, Suceava County, consisting largely of Dutch ducats, together with Venetian ducats and various Ottoman coins.

Polish silver coins are represented on the stamp with the face value of lei 14.50. In the first decades of the 16th century money circulation in the Romanian Principalities was dominated by low-value pieces, of which were noted Polish silver coins (half groszy), Turkish akçes and Hungarian denarii. Monetary circulation was gradually optimized to meet the needs of the trade, through the introduction of gold coins, of silver monetary issues of high value and multiple categories of Polish silver coins of mid level value: triple groszy, pó?toraks and groszy.

Within the numismatic collection of NBR several monetary deposits are kept, consisting of Polish silver coins from the 16th-17th centuries, discovered especially in Moldavia.

Romfilatelia thanks the Issue, Treasury and Cash Management Department within the National Bank of Romania for the docummentary and photographic support granted in the accomplishment of this postage stamp issue. 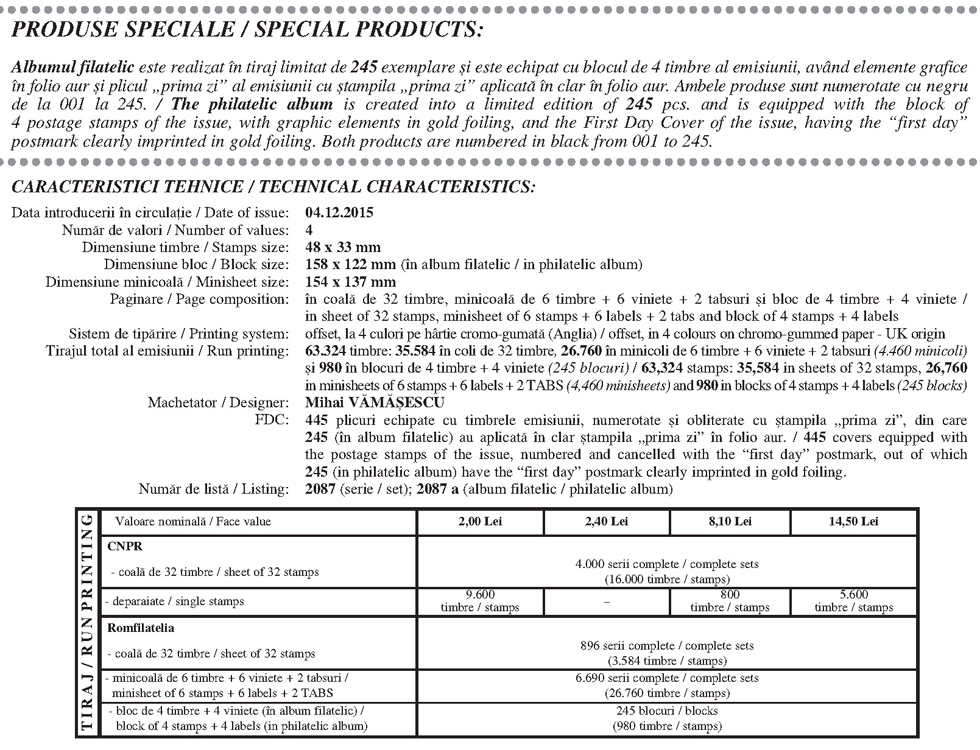