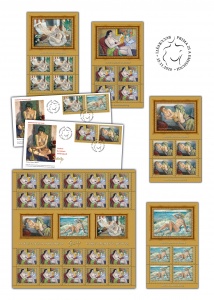 Romfilatelia continues the series of issues dedicated to Romanian painting and introduces into circulation, on Wednesday, November 25th this year, the postage stamps issue entitled “Nudes in Romanian Painting”, illustrating this kind of artworks belonging to Theodor Pallady.

Theodor Pallady (1871-1956) initially studied engineering at the Polytechnic Institute in Dresden, but, advised and encouraged by those who recognized his talent, he soon turned to art. He studied, worked and exhibited extensively in Paris, returning to the country in 1904. In his painting, influenced by Symbolism, nudes occupy a special place. The artist avoids the violent contrasts of shadows and lights, draws the outline of the female body with a clear line and, above all, thrillingly captures the expressions on women’s faces – focused or relaxed, thinking, calm, dreamy – that subtly reveal their inner life.

The first stamp of the issue, with the face value of Lei 2.20, reproduces the work Toujours du Baudelaire, a tribute dedicated by Theodor Pallady to the great Symbolist poet. The composition is daring. The painting depicts two nudes of young women – the first resting on the couch, and the second lying down on a carpet with geometric motifs, leaning on her hands – in a relaxed pose, full of sensuality and disinvolture. Remarkable in artistic terms, the work was painted in a colour range based on warm-cold contrast. The painting belongs to the National Museum of Art of Romania in Bucharest.

The second stamp of the issue, with the face value of Lei 3.30, illustrates the painting Nude Woman. The composition brings together, in the middle of it, the silhouette of the young woman and the flower bouquet, between which it seems that a mysterious dialogue is woven. The light hue of the carnation, whose echoes are found in the porcelain of the vessel, is preciously highlighted by the dark shades around the drawing. The painting belongs to the “Ion Ionescu-Quintus” Prahova County Museum of Art in Ploiesti.

The painting Lady on the Couch, illustrated on the third stamp of the series, with the face value of Lei 5.00, belongs to the cycle of nudes with grey socks and depicts a young woman lying on a couch, with her head resting against her arm and a leg bent over the folds of a green drape. The woman is caught in a relaxed posture, which exudes sensuality and femininity. The painting belongs to the National Museum of Art of Romania in Bucharest.

The painting entitled Nude by the Sea, which depicts a young woman sitting on the beach, on the seashore, is depicted on the last stamp of the series, with the face value of Lei 19.00. The young woman is portrayed in a relaxed pose, holding her palm over her eyes and melancholically gazing at the horizon. The composition is balanced, the drawing is rigorous, and the colour palette is based on the warm-cold contrast. The painting belongs to the National Museum of Art of Romania in Bucharest.

The two first day envelopes reproduce the painting Odalisque, illustrating the nude of a young Turkish lady, sitting cross-legged and smoking hookah. The young woman’s silhouette, extremely expressive, exudes sensuality, femininity and ease. In fine arts terms, the work stands out by a rigorous drawing, a chromatic palette based on the contrast of red-green complementarity, as well as by a balanced composition. The painting belongs to the National Museum of Art of Romania in Bucharest.

Romfilatelia thanks the National Museum of Art of Romania in Bucharest and “Ion Ionescu-Quintus” Prahova County Museum of Art in Ploiesti for the documentary and photographic support provided for the development of this postage stamp issue.

The postage stamps issue “Nudes in Romanian Painting” will be available on Wednesday, November 25th  2020, in Romfilatelia’s shops network in Bucharest, Bacau, Brasov, Cluj-Napoca, Iasi and Timisoara and online on https://romfilatelia.ro/store/. The postage stamps issue is completed by the two “first day” covers, in sheet of 20 stamps and minisheet of 4 stamps with illustrated border. 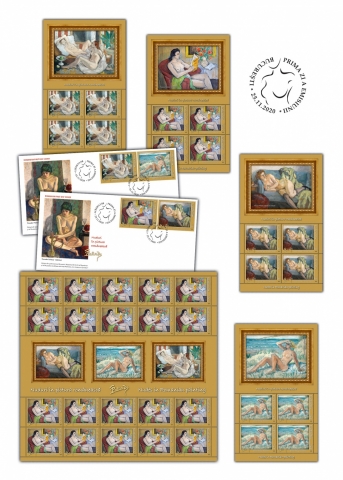 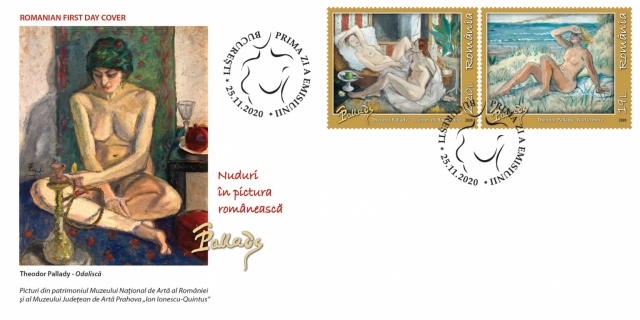 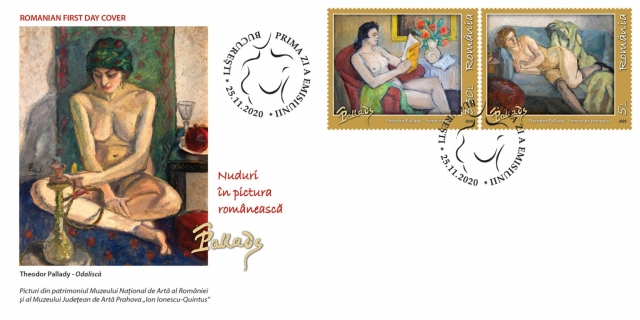 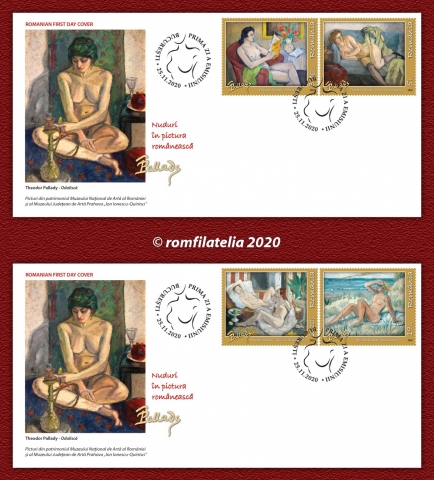 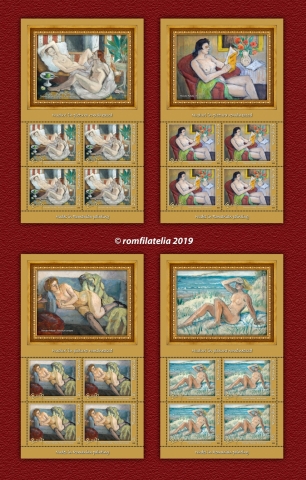 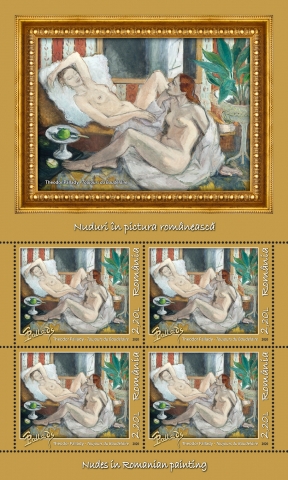 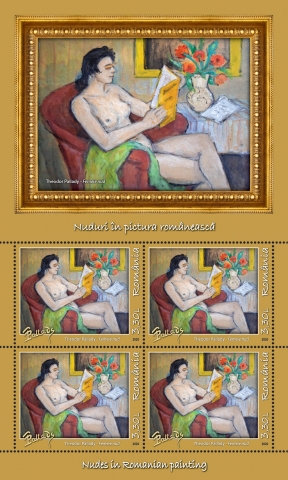 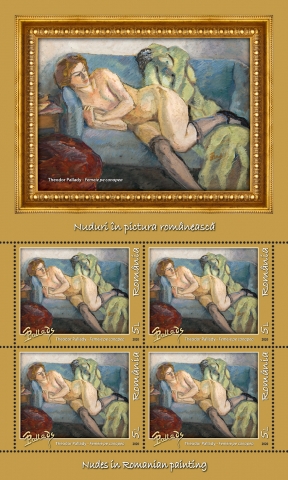 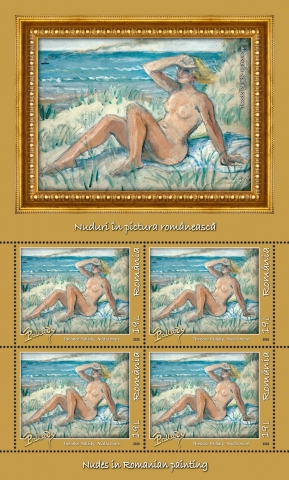 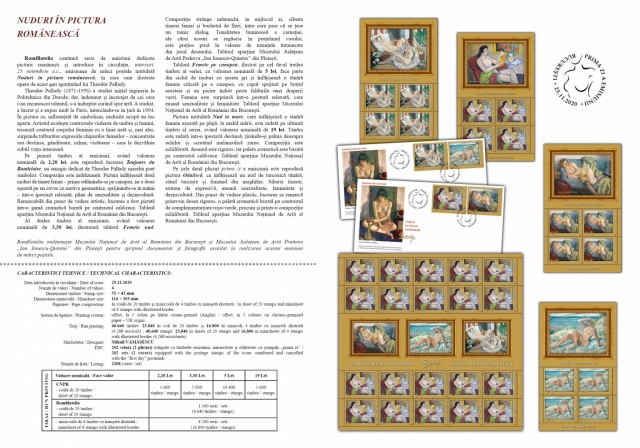 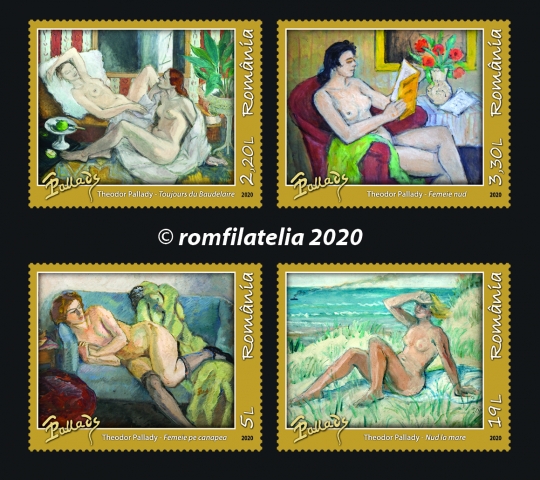