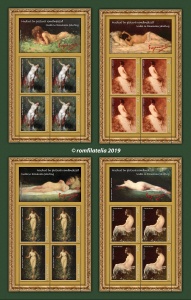 After the Romanian art was dominated, for centuries, by the Byzantine art and the Christian religion, the nude entered in the Romanian painting also through the artwork of Nicolae Grigorescu.

This year, Romfilatelia puts into circulation on Friday, February 15th, the postage stamp issue entitled Nudes in Romanian painting, which illustrates the most appreciated works of this kind belonging to Nicolae Grigorescu.

Nicolae Grigorescu (1838-1907), considered to be the great master of the Romanian brush, illustrated, in his paintings, the symbiosis between the realism of the Barbizon School, the impressionism and the symbolism.

Nicolae Grigorescu was the first plastic artist to become a member of the Romanian Academy.

“Rarely are those of our painters who have deeply felt the feminine charm, that warmth emanating from the body and face of the woman, that nervous flow that pervades her young being”, said George Oprescu.

In the paintings whose images are reproduced on stamps, there are the models that attracted Nicolae Grigorescu the most, the delicate ones, still unformed, slender and willowy, in whom everything was only a promise, and nothing reached to adulthood.

On the stamp with the face of Lei 2 is illustrated the picture of the Bacanta painting, the most successful of all the nudes painted by Nicolae Grigorescu. It is a medium sized painting and has been created with a passion and warmth that have been completely transposed into this remarkable plastic composition.

The stamp with the face value of Lei 3 reproduces the work After the bath, in which the character is seen from the back, a pictorial manner that makes the most of the delicate line of shapes – the curvature of the neck and the whole-body undulation.

On the ʺfirst dayʺ envelope is represented the painting Nude by the sea, which, on the background of the sea and the sky, outlines the elegant, noble figure of a woman looking romantically sideways, the painting combining the realistic treatment of the nude with impressive elements in the interpretation of the landscape.

Painted beside the Black Sea, off the township of Viile, near Constanta, the painting had as model the female character known as Zettina Urechia.

Romfilatelia thanks the National Museum of Art of Romania for the documentary support given to this postage stamp issue.