Romfilatelia introduces into circulation on Friday, September 23rd this year, a postage stamps issue dedicated to the anniversary of a century and a half since the establishment of a symbol of the Romania’s capital, entitled North Railway Station, 150 Years.

The history of Romanian railways, built on the territory of the United Principalities, begins in September 1865, when Alexandru Ioan Cuza leased the execution of the Bucharest – Giurgiu line to an English company that carried out the project in 1869, when the first Bucharest – Filaret passenger station was also inaugurated.

The North Railway Station is found in the project contracted with the H. B. Strousberg Company, starting in 1868, when Carol I laid the foundation stone of the construction. The land on which the station was built under the name of Târgoviștei Railway Station belonged to Zoe Racoviță, grand-daughter of the nobleman Dinicu Golescu and wife of Effingham Grant (brother of Maria Rosetti, the “Revolutionary Romania” of the painter Rosenthal).

In 1872, the railway station was inaugurated, and with it the Roman-Galați-București-Pitești railway line. It was initially used for mixed transport (passengers and cargo), and then only for passengers. After the War of Independence in 1877, to commemorate the heroes who fell in the battles of Grivița, Calea Târgoviștei was named Calea Griviței.

Târgoviștei Railway Station entered the international railway circuit on June 8th, 1883, when it received the “Orient-Express” trainset. After several interventions aimed at modernization, in 1888, the name of the North Railway Station was unanimously adopted.

In 1889, the first telephone installation of the CFR (Romanian Railway Company) came into operation, and later the telephone switchboard with 25 lines was inaugurated. A new wing of the building, which would later house the Royal Salon, was completed in 1894.

After the rejection of the proposal to build a central railway station in the area where the Romanian Opera is now located, due to problems related to expropriations and the outbreak of the First World War, the decision was made to restore the North Railway Station. Starting with 1930, the number of lines was expanded and the special pediment with columns was built, according to the project of the architect Victor Ștefănescu. By order of Mayor Alexandru Donescu, demolitions were carried out to allow the development of the current Gheorghe Duca Boulevard.

In 1960, the platforms were extended towards the Basarab Railway Station and the lighting of the installations, platforms and lines was introduced, ensuring visibility and safety conditions. The first electric locomotives appeared in the landscape of the station in 1968, with the electrification of the Bucharest-Ploiești line.

The North Railway Station is on the list of historical monuments, a symbol of Bucharest, next to the neighbouring building that houses the Administrative Palace of the CFR. After a century and a half of existence, the North Railway Station is at the stage of starting a project that will transform it into a European railway hub that will meet the current requirements of the modernization of railway transport.

On the stamp with the face value of Lei 10, is depicted an overview of the main façade, in the initial version of the construction.

The stamp with the face value of Lei 10.50 presents a general view with a perspective of the new wing, which includes pediment with columns.

The First Day Cover suggestively illustrates, in its graphics, architectural elements from the first decade of the construction’s existence, known nowadays as the “North Railway Station” (in Romanian: Gara de Nord).

Romfilatelia thanks the representatives of CNCF CFR SA – Regional Branch CF Bucharest and the Library of the Romanian Academy for the documentary and photographic support given to the development of this postage stamps issue.

The philatelic issue will be available starting Friday, 23rd of September, in Romfilatelia’s shops network in Bucharest, Bacau, Brasov, Cluj-Napoca, Iasi and Timisoara and online on https://romfilatelia.ro/store/. 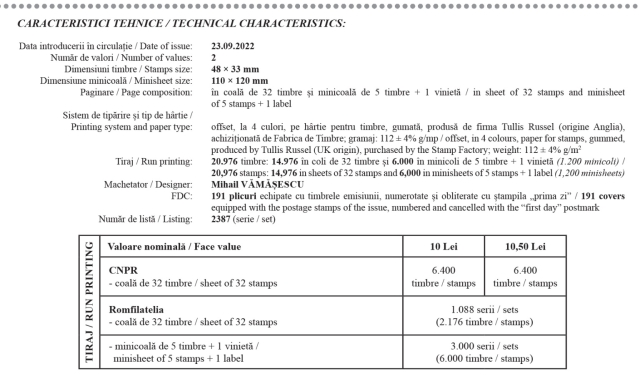 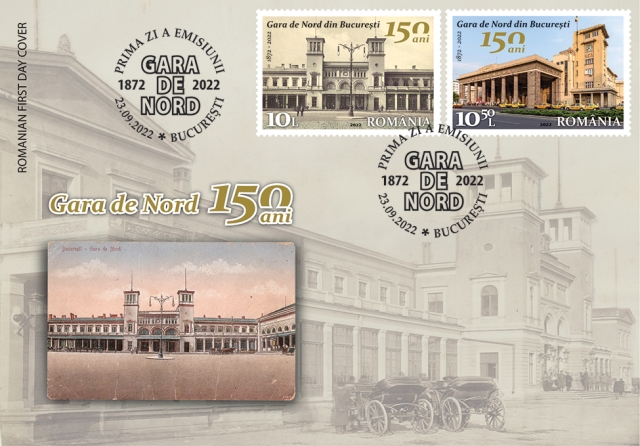 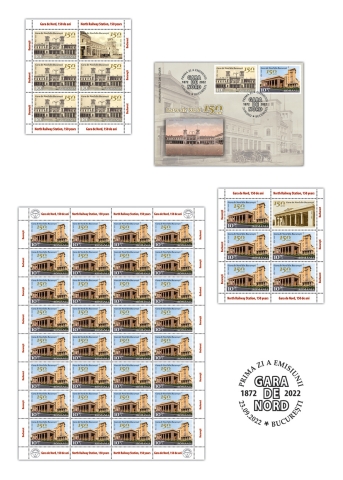 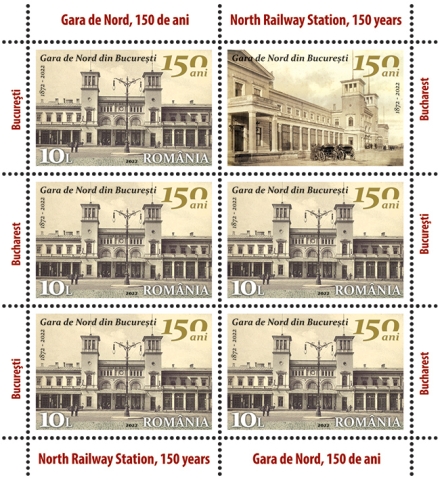 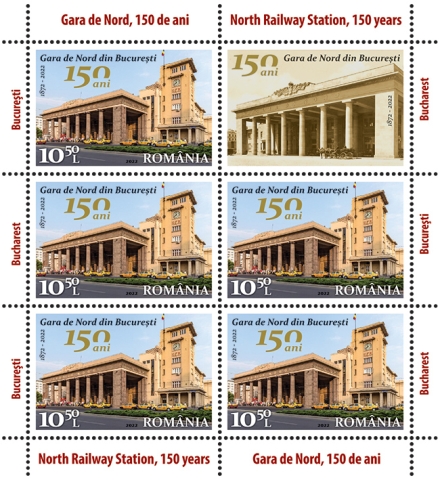 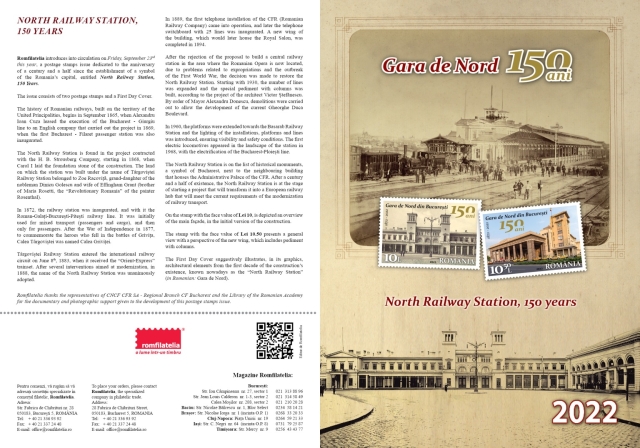 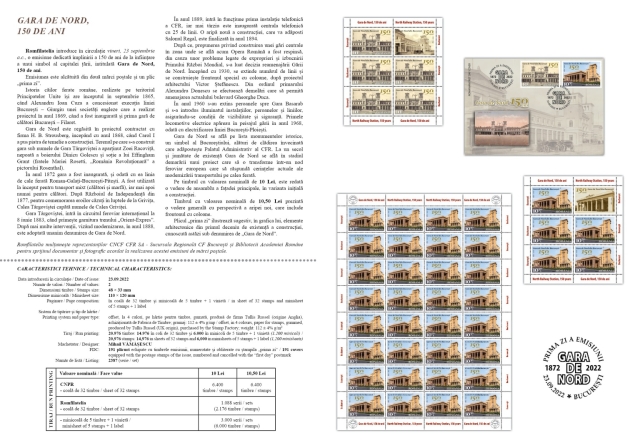 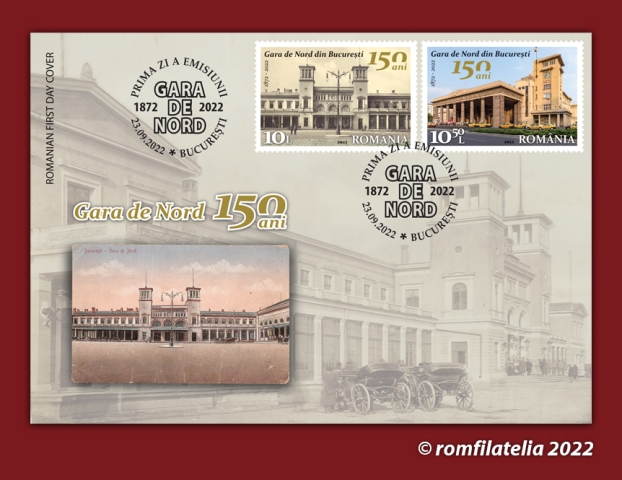 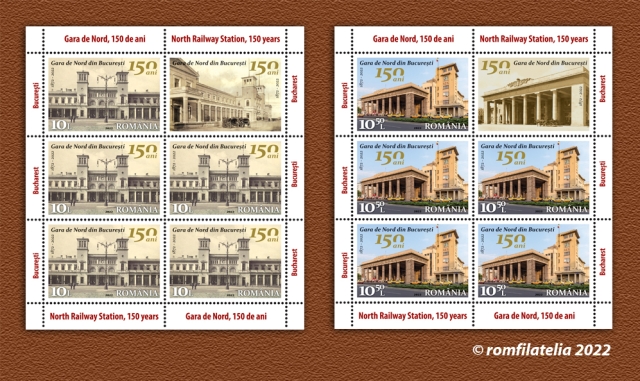 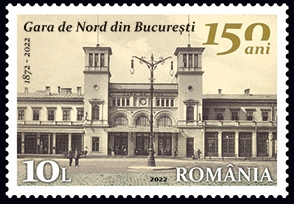 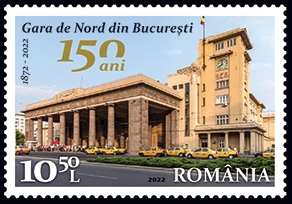