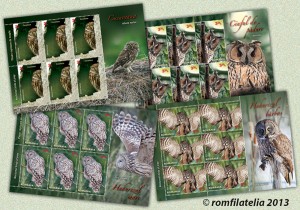 The owls are impressive birds to which numerous myths, legends, stories or superstitions have been associated ever since antiquity. In many cultures from Africa,America, Europe or theMiddle Eastthere are beliefs according to which the presence of owls would predict diseases and death. On the other hand, in Hinduism, the owl is associated to the goddess Lakshmi, a divinity of prosperity, luck, fertility and generosity, while the old Greeks used to associate the owl to wisdom, considering it to be the bird of Athena, the goddess of wisdom.

Their predominantly nocturnal activity, the wild territories where they live, their dark plumage, offering them a very good camouflage, and their silent flight help them hide from the human sight, being rarely seen and only after sunset. Their specific song arouses fear just like their sight, their eyes being very expressive and acute. However, owls are extremely useful birds as their basic food consists of rodents, which destroy the cultures and carry many dangerous diseases for the human being. Nocturnal birds of prey, elite predators in the ecosystems where they live, the owls have a series of specific characteristics such as a sharp hearing, a silent flight and very strong claws.

Also known as Athene noctua, it is a small bird whose length measures between 23 and 27 cm. It may be seen in Central andWestern Europe. It mainly lives in rocky areas and localities, often finding shelter in abandoned buildings or in the attics of household outbuildings. It feeds on rodents to which we may add big insects, birds, small snakes and lizards that it hunts at night. The Romanian popular name of the little owl comes from the sounds produced at a high tonality. Their eyes are very expressive and large as compared to the size of their body and have an intense yellow colour.

This is a bird of prey of medium size, its body measures between 30 and 40 cm and it may be seen in North America, Eurasia andNorthern Africa. It lives on alpine meadows covered with juniper, in coniferae and leaf woods, coming down to agricultural cultures, in orchards and urban parks. It is a nocturnal bird of prey that hunts small animals, mainly rodents. The name of this bird derives from the tufts of feathers on its head resembling some ears. Depending on the environment, the situation or its potential adversaries, the long-eared owl may change its look by adapting its position and colour for camouflage.

As its name suggests, this is a big owl with its body measuring about 60 cm, which may be seen from Western Europe up to Correa andJapan. It lives in thick forests on hills and mountains preferring the coniferae woods, and it has the qualities of a very good night hunter feeding on birds and small mammals. The particularity of the species is represented by the two grey facial disks around the eyes, which are luminous, clean and spotless.

This is a big owl that measures between 65-70 cm and lives in Northern Europe (Poland,FinlandandSweden) reaching as far as Siberia and Northern America,CanadaandAlaska, in thick coniferae forests. It migrates not depending on season, but depending on the presence of food, which mainly consists of water rats and small birds and animals. It hunts at nightfall and night, only occasionally during the day. Its plumage gives it a very good camouflage and it is hard to be seen on the tree trunks. Its favourite hunting grounds are fields, swamps and glades.

We thank the management of “Grigore Antipa” National Museum of Natural History for the documentary support granted in the accomplishment of this postage stamps issue.
Issue date: 2013-06-28 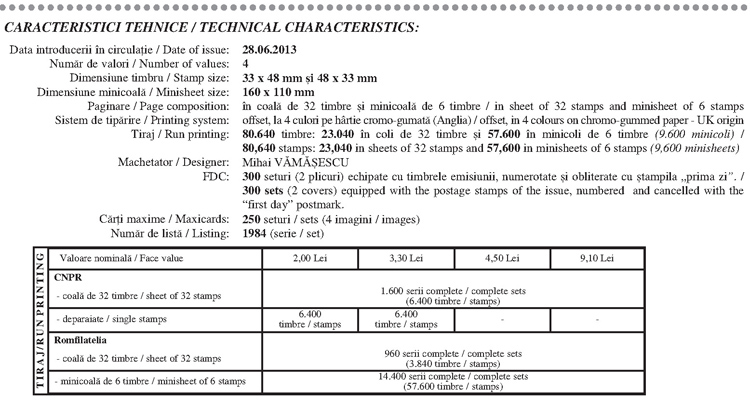