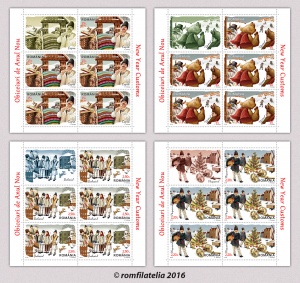 Formerly, December was called verbatim the “Knitting needle” month, and “Sheepskin Coat” month, the month of “Snow” or “St. Andrew’s” month.   In the world of the Romanian village the traditions and customs from bygone times are the unwritten national treasure and folk wisdom, which unite the pre-Christian and Christian practices. Some of them have been forgotten, but others continue up to this day and we can seek their origin in ancient times when, in general, a moment that marked a beginning had a powerful symbolic importance.   The list of Romanian traditions and customs includes in addition to carols, dances with masks, processions, folk theatre and dances specific to the end of the year. Of all these, Romfilatelia presents within the philatelic issue New Year Customs, four postage stamps that render some of the traditions of the end of the year, essences of our spiritual wealth.    “Plugusorul” (literal translation – little plow) is a Romanian custom practiced since ancient times on New Year’s Day. This agrarian tradition, which is originally a sacred ritual manifestation of the wishes to have rich harvests, has to do with the work to obtain bread.   Also known by other names like “plow” or “ploughmen”, plugusorul has a symbolic character, originated by a magical incantation.   Children are the first to start plugusorul and begin to walk among the houses, receiving in exchange for their wishes of a good year, knot-shaped breads, fruit or money. The troop leader is marked by a brass and tin covered cane, decorated with colorful tassels, representing the mark of authority.   An agrarian custom, structured after carols, Riding with the “buhai” (a special drum caused to boom by pulling on a tuft of hair attached to it) is a tradition kept for centuries in Romanian villages. The buhai custom is practiced on New Year’s Eve, between dusk and midnight.   The object itself is a churn with one of the ends covered by a stretched piece of sheepskin, from the center of which hangs a horsehair mane, which produces a solemn, strange and unmusical sound, reminiscent of a bull’s roar.   Sometimes the buhai is adorned with ram’s horns wrapped in colorful paper, and tassels.   The groups of well-wishers wear traditional costumes adorned with hats, whips and bells, being fondly received by the hosts, who reward them with apples, nuts, pretzels and knot-shaped breads.   Another ancient custom that takes place in the New Year’s evening is the Bear or dance, a popular dance with masks with an omen characteristic, consisting of disguised well-wishers. Powerful, unpredictable and cruel, the bear is an animal revered since ancient times. In Romanian folklore, bears are empowered with different protective abilities, therapeutic and weather changing.   The masked costume is handmade from the fur of a whole animal, and the head is adorned with two red tassels.   The Bear dance is the bringer of fertility and the sounds of the whistle, drums and bells will result in raising the heat from the earth and so the soil will be more productive.   The Goat dance is an ancient custom still retained by Romanians, which is part of the traditions of winter. On New Year’s Day, through the folk theatre that the Goat dance presents going through a cycle of “transformations” (death, burial, mourning and resurrection) we actually participate in a dramatic ritual intertwined with elements of worship.   According to Romanian traditions, going along with the goat, as well as receiving the well-wishers in every home, brought Christians good luck and prosperity in the household, being also an important custom for farmers who felt the Goat dance was a calling to the divine force for attracting rich crops. An anciently worshiped animal, the goat was associated to the cult of fertility.The ritual of this dance symbolizes the burial of the old year and the re-birth of the new year.

New Year’s custom, going around with the Sorcova, is practiced especially by children. The etymology of the word “sorcova” comes from the Bulgarian word “surov”, which means “green” and refers to the budding green branch that the well-wishers of old would use.

For the well-wishers, the sorcova stick is used instead of a magic wand and has the capacity to transmit health and youth to the one being wished upon.

These New Year customs are practiced in the belief that in the coming year, people will be healthier and will  have the abundance of their barns, herds and orchards.

We wish you healthy, peaceful New Year with the hope for a better future! 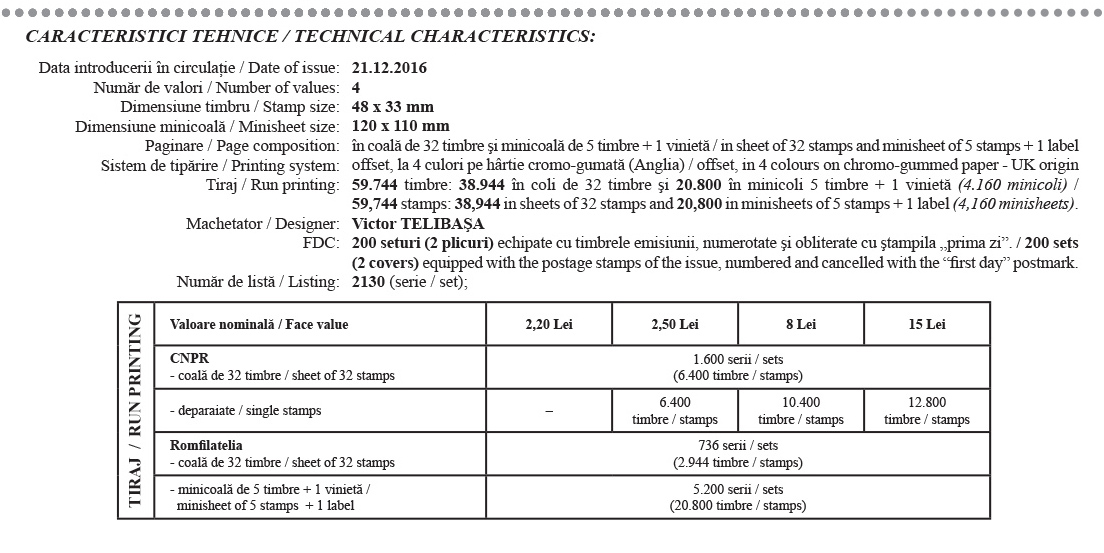