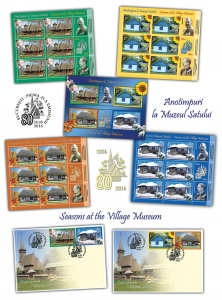 Romfilatelia invites you on a journey in the middle of the Romanian capital, into a “genuine” village, which keeps the character of old times and the smell of childhood on its alleys, a place which does not tell a story to its visitors, but is one itself.

This is the “Dimitrie Gusti” National Village Museum, which is also the topic of the latest Romfilatelia project and which the stamps honour at 80 years since its foundation, through a beautiful and ingenious interpretation. Seasons at the Village Museum is the anniversary postage stamps issue dedicated to the “village in the heart of the city” and can be purchased starting with Friday, May 20th, 2016, in Romfilatelia’s stores in Bucharest, Bacau, Brasov, Cluj-Napoca, Iasi and Timisoara.

The issue’s postage stamps reproduce monuments within the museum, from the 18th and 19th centuries, each construction being presented in a different season and completed with a visual story. The chromatic aspect of stamps underline the whole graphic concept, each season being represented by specific colours and elements, as follows: spring is suggested by the green colour and the apricot flowers, summer by yellow and the sunflower, autumn by copper-colored leaves and the same colour, and winter by blue and white, but also by the fir branch covered in snow.

The stamp with the face value of lei 2.00 reproduces the image of “Sfintii Voievozi” Church from the Rapciuni village, Neamt County, which was built in 1773 and entered into the “Dimitrie Gusti” National Village Museum’s collection in 1958. The artistic value of the church is completed by the mural painting, the church being the place where all the important events from the village life were recorded.

The Jurilovca Homestead from Tulcea County, 1898, is found on the stamp with the face value of lei 2.40, being a specific ensemble of the Lipova style. The homestead, with all the annexes, was brought in the museum village in 1963. The constructive style, the ornamental elements and the massive presence of fishing gear turn the Jurilovca household into a valuable evidence of the life and work of a population that has found its second homeland in Romania.

The stamp with the face value of lei 8.00 reproduces the image of the Surdesti Homestead, Maramures, 18th century, construction originating from the Lapus area and transferred to the museum in 1967. Due to its specific arrangement – the shed with stable at the entrance, near the street, and the house which is located in the second part of the yard – the household structure is part of the “double courtyard” type specific to pastoral-agrarian economy villages.

On the stamp with the face value of lei 15.00 is depicted the image of Chiojdu – Mic Homestead, Buzau County, 18th century, characterized by the house which shelters the cellar and the tool room, the four slope roof and the decorative elements, done by chopping and witling.

Three labels which are found on the minisheets complete the philatelic project: the first one presents prof. Dimitrie Gusti, from whose initiative the Village Museum was created, being one of the first ethnographic museums in the world, the second one illustrates the anniversary logo which celebrates the 8 decades since foundation, and the last label depicts King Carol II, in whose presence the museum was officially inaugurated on May 10th, 1936, the opening for the public taking place a week later.

The four stamps are completed by a set of two first day covers, and as page composition were used the sheet of 32 stamps, the minisheet of 6 stamps + 3 labels and the block of 4 stamps.

Romfilatelia thanks the “Dimitrie Gusti” National Village Museum for the documentary support offered in the creation of this postage stamps issue.