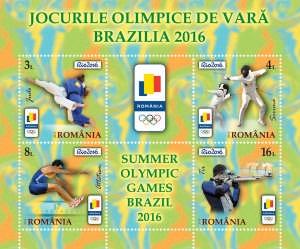 “The Olympic Games are the quadrennial celebration of the springtime of humanity”.
(Pierre de Coubertin)

The Olympics topic is a traditional one for the Romanian philately and this year Romfilatelia continues this tradition dedicating its latest stamp project to the Summer Olympic Games, Brazil 2016, the most awaited sports competition of the year, which will take place from August 5th to 21st.

Rio de Janeiro was named the host city of the competition, being the first South American city to host the Summer Olympics, the second in Latin America after Mexico City in 1968 and the first in the Southern Hemisphere since 2000.

On the postage stamp with the face value of lei 4 is represented fencing, a discipline that was considered a sport starting with the 15th century. Included in the Olympic program from the very first edition of the modern Games, in 1896, in Athens, fencing was present without interruption to all editions of the Olympics. Since 1928, the year of Romania’s first participation in the Olympic fencing competitions, the only years our country was absent from this Olympic discipline are 1932, 1940, 1944 and 1948.

The fourth stamp, with the face value of lei 16, refers to shooting, a sport present in the Olympic competition right from the inaugural edition of the modern Olympic Games, in 1896, in Athens. Currently there are 15 Olympic disciplines of shooting, divided into three large categories: pistol, rifle and air rifle. Romania was represented for the first time in Olympic shooting competitions in 1900 in Paris, then in 1924 at the Olympic Games which were also held in Paris, and in 1936 at the Olympic Games in Berlin. Since 1952, our representatives have not missed any edition of the Olympics.

The issue is completed by a first day cover, and as page composition were used the sheet of
28 stamps, the minisheet of 5 stamps + 1 label and the block of 4 stamps + 2 labels.

Romfilatelia thanks the Romanian Olympic and Sports Committee for the documentary support granted in the achievement of this postage stamp issue.

The team of Romfilatelia wishes good luck and success to the national delegation
participating in the Summer Olympic Games, Brazil 2016!