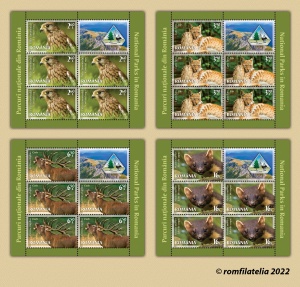 The philatelic issue, related to the theme, illustrates in the four stamps components of the fauna of the area: the common kestrel, the lynx, the red deer and the European pine marten, having the face values of the postage stamps Lei 2.60, Lei 3.90, Lei 6.50 and Lei 16.

National Calimani Park defines a protected area of national interest, located in the central-northern part of Romania, on the administrative territories belonging to the counties of Mures, Suceava, Harghita and Bistrita-Nasaud.

The first proposal to establish it as a national park was registered in 1975, and the declaration as a protected area was legislated in 2000.

Located in the mountains that borrow its name and encircling the largest crater of an extinct volcano, with a diameter of 10 km, the park with a total area of 24,556 ha has in its composition the nature reserves: 12 Apostles (a statuary group, the work of nature), Jnepenisul cu Pinus cembra (Juniper grove with Pinus cembra) – Calimani, and Lake Iezer. A former sulphur mine is now found as an enclave in the park area.

The fauna of the area, diversified, includes in the list: the brown bear, the red deer, the grey wolf, the wild boar, the fox, the otter, the squirrel, the lynx, the European pine marten, the European polecat, etc. along with birds such as the golden eagle, the western capercaillie, the white-throated dipper, the Eurasian bullfinch, the common kestrel, the peregrine falcon, the Eurasian woodcock, etc.

The common kestrel (Falco tinnunculus), also known as kestrel, it is a diurnal birds of prey, a falcon species that prefers rocky land. It is a small, chestnut-coloured bird of prey. It has a length of 30-36 cm and a weight of approximately 180 g. The genus name (Falco) is the Latin name for the falcons, and the species name (tinnunculus) comes from the Latin word translated “to tingle”. It is a sedentary or partially migratory species. It feeds mainly on rodents. The females lay 3-6 eggs, and the chicks leave the nest after approximately 30 days. The pairs nest in isolation, occupying nests abandoned by other species. The main threat is the widespread use of pesticides in agriculture.

The lynx (Lynx lynx), is a medium-sized feline native to the forests of Europe and Siberia, Central Asia and East Asia. Length 80-130 cm, height 55-75 cm, weight 18-30 kg. It is an emblematic feline of the Carpathians. It is the third largest predator in Europe, after the bear and the wolf. It is a nocturnal animal, solitary and very difficult to discover.

The genus name (Lynx) is borrowed from French and Latin and also defines the name wild cat.

All lynx species are carnivores, and their habitat is between 100 and 2,000 km2, but European species have limited territory due to the expansion of human activities. It attacks prey unexpectedly, being able to perform 4-6 m jumps in any direction, and they can see very well at night. With the exception of Russia, the largest lynx population is found in Romania (approximately 2,050 specimens in 2001).

The red deer (Cervus elaphus), the adornment of the mountain forests, is an herbivorous mammal; it belongs to the category of ruminants. It is the largest representative of the hoofed mammals. The length of the body can reach up to 2 meters, and the weight can reach 150-300 kg (compared to the weight of a roe of 80-150 kg). Branched horns, 2 m long, can weigh 16 kg (horns change annually).

The food consists of young shoots or sprouts, bark, snow-covered green leaves. The fearsome enemies of the red deer are the wolf, lynx and bear. The red deer cohabits in troops formed after mating. New-borns and stags up to the age of two are found in the hinds’ troops.

Although capable of fast climbing and big jumps, the European pine marten hunts almost all its prey on the ground (small rodents, birds, and insects). In turn, it falls victim to wild animals and birds of prey such as: fox, wolf, owl and eagle.

The female has a fairly long gestation period (about 8 months), and the 3-5 young, usually born in April, are only 10 cm at birth and weigh up to 30 g. They remain under the protection of the mother for 3-4 months.

The risk of extinction of the species is low, with a life expectancy of about 10 years.

Romfilatelia thanks the representatives of the Ministry of Environment, Water and Forests, National Calimani Park and the “Grigore Antipa” National Museum of Natural History in Bucharest for the documentary and photographic support provided to the development this postage stamps issue. 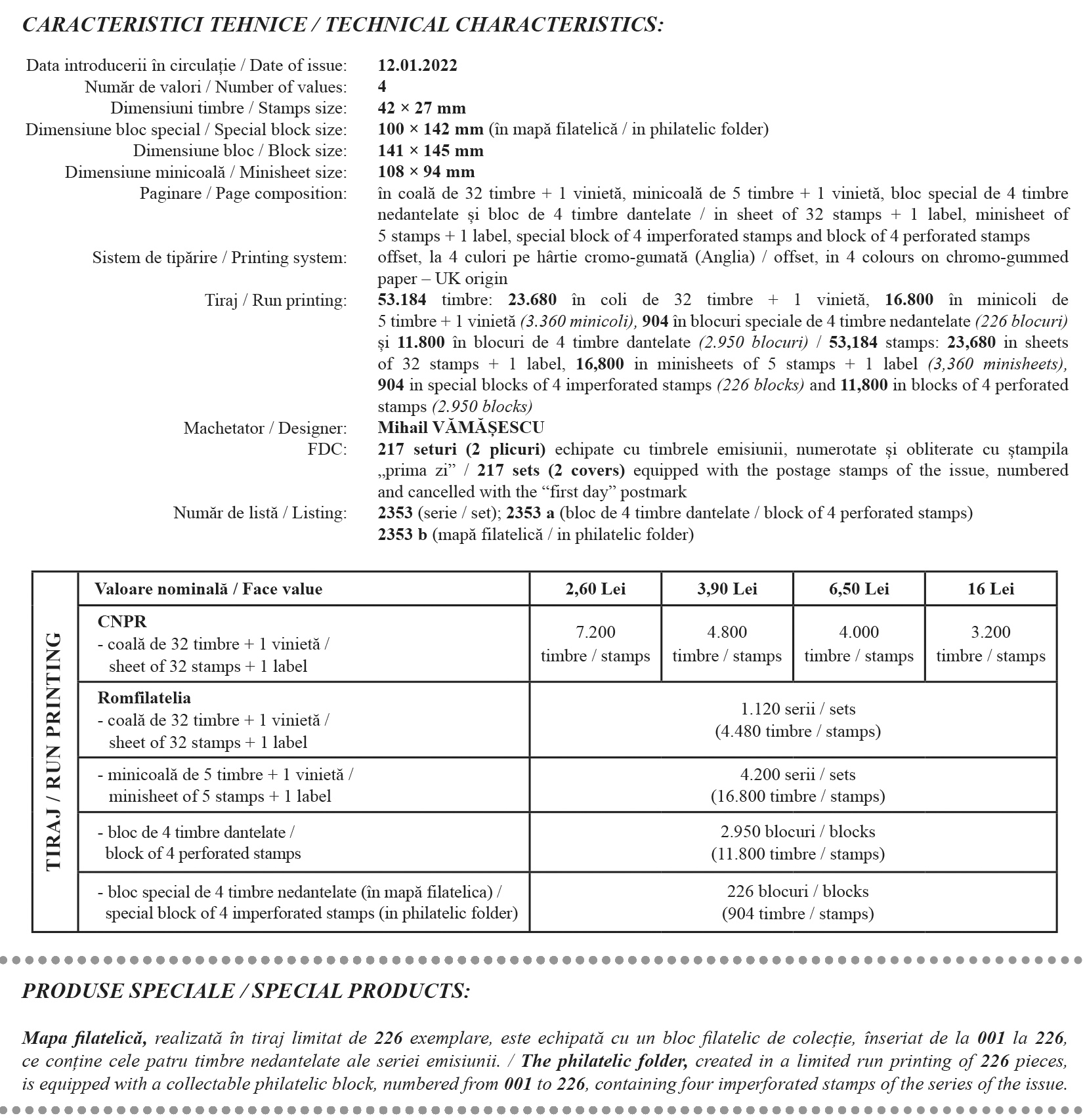