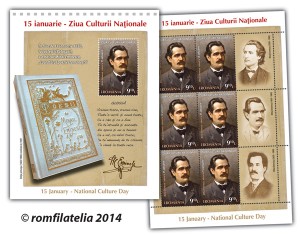 “Early 20th-century Romanian poetry will begin under the auspices of his genius and the national language pattern, which found in Eminescu the most beautiful crystallization to this day, representing the starting point for the future development of the Romanian reflection mantle”, as Titu Maiorescu was witnessing about the Morning Star of the Romanian poetry, Mihai Eminescu.

National symbol of poetry, Mihai Eminescu was the seventh child of Gheorghe and Raluca Eminovici, being born in 1850 at Ipotesti (Botosani county).

He starts school at the National Hauptschule in Cernauti, and continues his studies at K. K. Ober Gymnazium in the same town. During his studies, Eminescu becomes an avid spectator of the stage plays performed by the Fani Tardini – Vladicescu troupe.

At the age of 15, he becomes curator at the Aron Pumnul Library, continuing his education by taking private lessons. In 1866 he begins his poetic career with an elegy dedicated to Aron Pumnul, “La mormântul lui Aron Pumnul” (At the Grave of Aron Pumnul).

In the same year, he starts collaborating with the literary magazine “Familia”, released under Iosif Vulcan’s editorship, where he publishes his first poem “De-as avea” (If I were to have) signed under his new literary name, that of Mihai Eminescu. His collaboration with this magazine lasts until 1869.

A permanent hectic temper, the great poet is known as a prompter, copyist, and sometimes actor in the drama troupes led by Iorgu Caragiale and Mihai Pascaly. His incomplete education brought him only the status of “extraordinary student” of the Faculty of Philosophy inViennawhere he achieves a rich encyclopedic knowledge.

The 1870-1871 period represents his beginning in literary and political publishing. Eminescu starts to collaborate with the Journal “Convorbiri Literare” where he published his poems “Venere si Madona” (Venus and Madonna) (April 15th,1870), followed by “Epigonii” (Epigones) and the fairytale “Fat – Frumos din lacrima” (Prince Charming of the Tear).

The members of the Junimea Movement are profoundly impressed by Eminescu’s talent, Titu Maiorescu writing on May 15th, 1871, in a visionary approach: “Characterized by a unique way of being, man of modern times, yet a jaded spirit, fond of quite exaggerated antitheses…but nevertheless a poet ,a poet in the true original sense, this is Mr. Mihai Eminescu”.

After staying inBerlinbetween 1872 and 1874, Eminescu returns to his country, where he is appointed Director of the Central Library inIasi. Shortly after, he meets Ion Creanga as the scholar inspector inIasiand Vaslui counties, with whom he will strike up a strong friendship.

In 1877, the poet settles in Bucharestwhere he starts to workfor the “Timpul” newspaper. Along with political and aesthetic articles, he will have published some of his poems such as “Luceafarul” (The Morning Star), “Scrisorile” (The Letters),but also other pieces of writing until 1883, when his first mental disorders appear.

After being hospitalized in Doctor Sutu’s sanatorium inBucharest, and then at the Ober Döbling Institute nearVienna, the poet passes away on June 15th, 1889 inBucharest.

Taking also into account the unjustified attacks of some of the poet’s contemporary fellows, Nicolae Iorga describes Eminescu as follows: “A complete man in a time when what is mostly necessary to us is the renewal of the accomplished human being that our times have broken into pieces, destroying mankind in its very initialand unequivocal essence.”

Eminescu’s literary work, in its rich entirety, can be defined as the foremost raising stage of the Romanian literature. The stamp hereby issued reproduces the image of one of Mihai Eminescu’s portraits that can be found in the gallery of paintings of theRomanianAcademy. Therefore, we address our thanks to this institution for the documentary support granted. 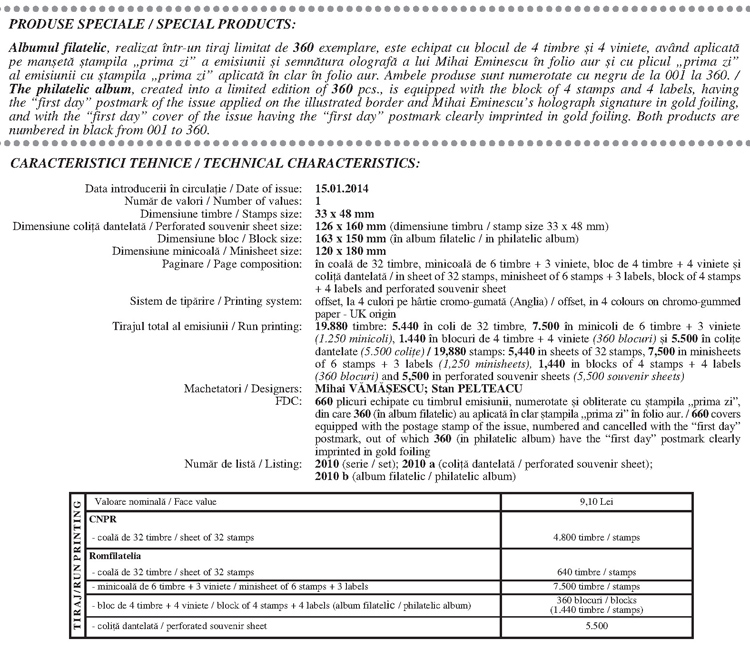