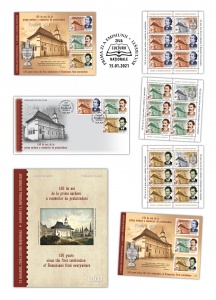 As every year, on January 15, the Romanian stamp marks the National Culture Day.

In order to highlight a theme approached for the first time, Romfilatelia introduces into circulation the postage stamps issue “150 years since the first celebration of Romanians from everywhere”, an event which took place at the Putna Monastery, in 1871.

150 years ago, Bukovina was a part of Austro-Hungary, being annexed by it in 1775. Romanian population in Bukovina was struggling to preserve its ethnic identity and cultivated the ideal of unification of all Romanian territories, thus aligning with the global trend of affirming the right of the peoples to self-determination and formation of nation states, a trend that gained momentum in the XIXth century.

On the occasion of the 400th anniversary of the consecration of Putna Monastery, in 1870, the Romanian students gathered in Vienna decided to turn the event into a great national celebration. The outbreak of the Franco-Prussian War, together with the repressive measures ordered by the Austro-Hungarian authorities, led to the postponement of the celebration for the following year. The students in Vienna chose the Organizing Committee of the Celebration at Putna, consisting of Ioan Slavici, Chairman, Mihai Eminescu, Secretary and other representatives of students from Bukovina. Along with them were Nicolae Teclu and A. D. Xenopol.

On August 15th, 1871, in the morning, over 3,000 Romanians from all over the world attended the Holy Mass at the Putna Monastery. The previous evening, the celebration was opened with 21 cannon salvos fired from the tops of nearby hills, followed by a religious service.

After the Holy Mass, A.D. Xenopol gave a lecture about Stephen the Great, as an exponent of the entire Romanian space.

In the afternoon, the violin of the young Ciprian Porumbescu, only 17 years old, moved the whole gathering with its chords. Embracing his father, Ciprian Porumbescu uttered the words, which have become famous: “Father, I sang to the whole of Dacia”.

Among the gifts brought by the participants and consecrated during a service was a silver homage urn that contained earth brought from all Romanian provinces. Placed on the tomb of Stephen the Great, the urn was accompanied by the prayer: “As this earth has been united here, may God intercede so as the places from which it was taken to unite!”.

The urn bears the inscription of a dedication that defines a portrait of the grand voivode: “To the hero, the conqueror, the defender of the Romanian existence, the shield of Christianity, to Stephen the Great, the Romanian Academic Youth (Junimea), MDCCCLXX!”.

It should be mentioned that part of the earth contained in the urn deposited on the tomb of Voivode Stephen was sprinkled on the battlefields that made the Great Union possible.

The block with the three perforated stamps joins to the image of the church of Putna Monastery the portraits of the mentioned personalities and the photograph of the homage urn, currently located in the Monastery Museum.

The philatelic folder is made in a limited edition of 248 copies and is equipped with the special imperforated block of the issue numbered from 001 to 248, as well as with the reproduction on special paper of the facsimile of a letter signed by Ioan Slavici and Mihai Eminescu.

The postage stamps issue “National Culture Day.150 years since the first celebration of Romanians from everywhere” will be available on Friday, January 15th  2021, in Romfilatelia’s shops network in Bucharest, Bacau, Brasov, Cluj-Napoca, Iasi and Timisoara and online on https://romfilatelia.ro/store/. The postage stamps issue is completed by the “first day” cover, in sheet of 32 stamps, minisheet of 5 stamps + 1 label, block of 3 perforated stamps and special block of 3 imperforated stamps. 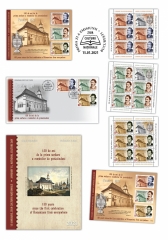 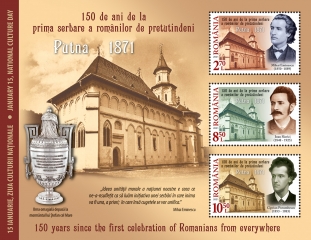 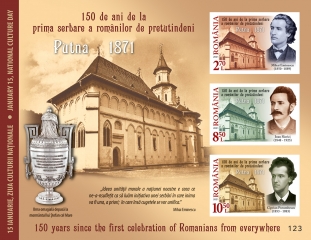 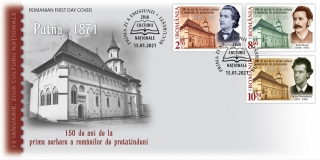 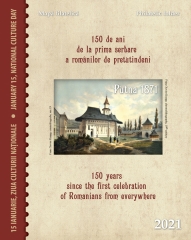 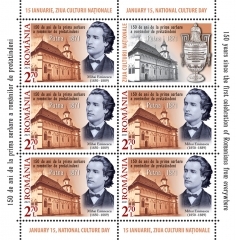 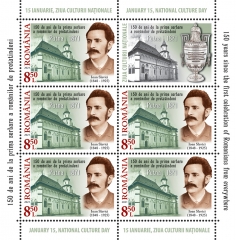 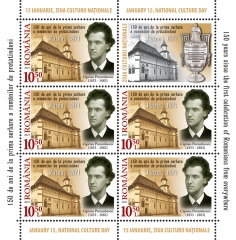 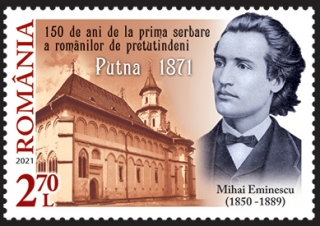 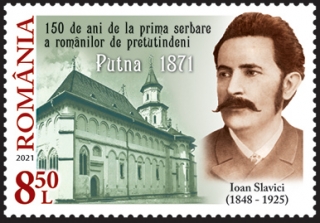 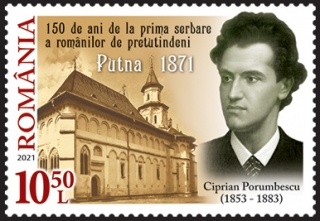