Mushrooms are among the invaluable gifts of the forest, among some of the oldest plant species on Earth. They appear in different shapes and colours and bear varied and suggestive names.

They have a beneficial role in nature, contributing to the decomposition and disintegration of vegetation, dead leaves and wood remains collected on the soil. Some mushroom species
form mycorrhizae on the roots of trees such as pine, oak, chestnut, and thanks to these, the trees absorb more easily the substances needed for growth. In exchange, mushrooms benefit
from shelter and food.

On the stamp with the face value of Lei 2.50 is illustrated Amanita caesarea, an edible mushroom species growing in Romania, but also in other regions of Europe, especially in warmer areas. They develop in deciduous forests, under oaks and rarely in conifer forests, growing only in warm places, especially on sandy and acidic soils from June to October.

Also commonly known as Caesar’s mushroom, it is one of the most appreciated mushrooms, being considered of superior quality, and a true delicacy, even in raw form.

Caesar’s mushroom was considered as princeps fungorum, a delicacy at the festive meals of the Roman Court.

In the first stages of development, Caesar’s mushroom is very different to its aspect when mature. From its white coloured ovoid shape, it reaches maturity in a concave shape and orange, which attracts one’s gaze from far away.

Amanita rubescens is a common mushroom that grows in our country and can be found directly on the ground, in deciduous and coniferous forests, sometimes even throughout parks or gardens, from June to October and bears the popular name of the European blusher. It is illustrated on the stamp with the face value of Lei 4.50. The European blusher is a species of edible mushrooms, which cohabitates forming mycorrhizae on the roots of trees. The fungus is easily recognizable by the pink colour found at the bottom of the stalk. The hat is of medium size, with a diameter of 5-15 cm, more or less fleshy, and centrally affixed to the stalk, brownish yellow colour and covered in scales. The blusher’s flesh is white and turns pink when it is cut or broken off and exposed to the air. This is a key characteristic that differentiates it from other species of Amanita.

Leccinum aurantiacum is part of the Boletaceae family and is commonly called the red-capped scaber stalk, and is illustrated on the stamp with the face value of Lei 8.

It is one of the most sought after mushrooms growing in our country. The hat is hemispherical at the beginning, then turns convex, with regular margins, and has a diameter of 6 to 20 cm, depending on its age. The stalk can grow up to 20 cm high and up to 5 cm thick, it is cylindrical in shape, whitish to ash colour and covered in brownish, ashy scales, arranged in longitudinal rows. It grows and develops in deciduous forests, especially under quaking aspens, from June to October.


Macrolepiota procera is an edible species that grows on the ground and can be found in meadows, forests or places with grass during summer and autumn. It is known under the popular name of the parasol mushroom. It is a great, spectacular mushroom with a hat of 10-30 cm in diameter, ovoid at first and then hemispherical, stretched out, and centrally mamelonated. The colour of the hat ranges from white when young, to gray or dark-brown. It is smooth in the centre and covered in brownish scales, placed in concentric circles and its edges have a frayed cuticle. It is represented on the stamp with the face value of Lei 15.

Romfilatelia thanks the Univ. Professor Phd. Catalin Tanase from the Faculty of Biology of the „Alexandru Ioan Cuza” University from Iasi and photographer Octavian Chende for the support granted in the creation of this postage stamp issue. 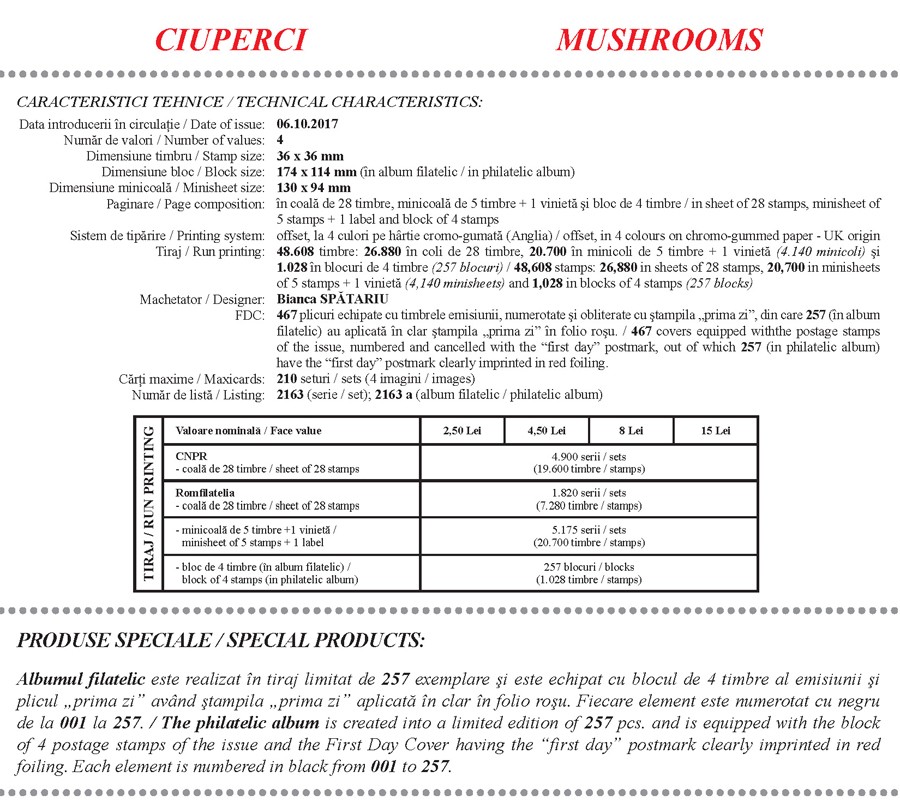