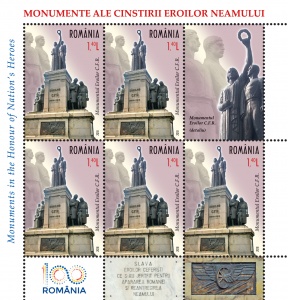 On the stamp with the face value of Lei 1.40 is represented the Monument to the Railway Heroes, located in the North Railway Station Square in Bucharest. The work of the renowned sculptors Cornel Medrea and Ion Jalea, the statue group was inaugurated in May 1943 to honour the memory of the heroes died in the line of duty at the front in the World War I. The monument is made up of several characters. A woman, who symbolizes the Homeland, holds a crown of laurels above the head of a railway worker. Next to her, on one side of the plinth, there are two railway workers and on the other side, a Romanian soldier, dressed in campaign outfit, protecting a woman and her child.

The Monument to the Sanitary Heroes, located in the vicinity of the Faculty of Medicine in Bucharest, is illustrated on the stamp with the face value of Lei 1.60. The monument was built in 1932, in memory of the Romanian medical body that saved lives during the World War I. The work belongs to the Italian sculptor Raffaello Romanelli. On a concrete plinth, covered with travertine, a statue made of bronze is raising, in the upper part of the plinth being depicted, in a high-relief, scenes from the activity of the sanitary body during the war: stretcher bearers gathering the wounded people from the battlefield, military surgeons operating, a campaign hospital, a charity sister who is dressing a wounded etc.

On the stamp with the face value of Lei 2 is represented the Tomb of the Unknown Soldier, located in “Carol I” Park in Bucharest. The statue group is a funerary-commemorative construction that symbolizes the sacrifice of all the anonymous soldiers who shed their blood during the World War I for the Unification of Romania. The ceremony of the bones’ deposition of the Unknown Soldier took place in Marasesti on May 14th, 1923, and the sarcophagus arrived in Bucharest on May 17th , 1923. In 1927, the project of the funeral ensemble was carried out, according to the plans of the sculptor Emil Wilhelm Becker. At the same time, through the care of “Cultul Patriei” (“Homeland Cult”) Association, a candle was lit whose flame burns even today, day and night.

The Monument to the Air Heroes, located in Bucharest, in Aviatorilor Square, is illustrated on the stamp with the face value of Lei 8.50. The work was built to honour the memory of the Romanian military and civilian airmen. The statue made of bronze, a work by Iosif Fekete, Lidia Kotzebue and Arnold Cencinschi (called Borgo Prund), has a height of 5 m and a weight of 5 t. The monument was built between 1930 and 1935. The statue illustrates the flying man with deployed wings, a symbol of defeat of death through heroism, around whom there are three fallen airmen.

The stamp with the face value of Lei 19 presents the Monument to the Heroes of the Engineer Arm – the Lion. Located in the crossroad of Iuliu Maniu and Geniului Avenues, was inaugurated on June 29th, 1929. On the plinth of the monument there are mounted bronze plates that reproduce moments from the activity of the military engineers, as well as four statues, also made of bronze, depicting combat engineers. The pedestal is surmounted by the statue of a bronze lion, with a length of 5.40 m, a height of 4.40 m and a weight of 6 t. It is depicted sitting on a cannon and a helmet over which is unfurled a battle flag, all belonging to enemy troops, symbolizing the strength, stoutness and bravery that showed the Romanian army in the World War I.

The new issue will be available on Friday, October 12th 2018, in Romfilatelia’ own shops network in Bucharest, Bacau, Brașov, Cluj-Napoca, Iași and Timișoara and online on https://romfilatelia.ro/store/. The postage stamp issue is completed by asset of two First Day Cover, as page composition there were used a sheet  of 32 stamps + 8 tabs and minisheet of 5 stamps + 1 label + 3 tabs. 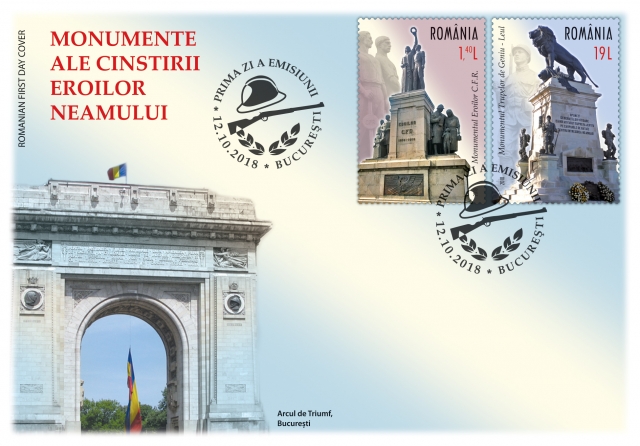 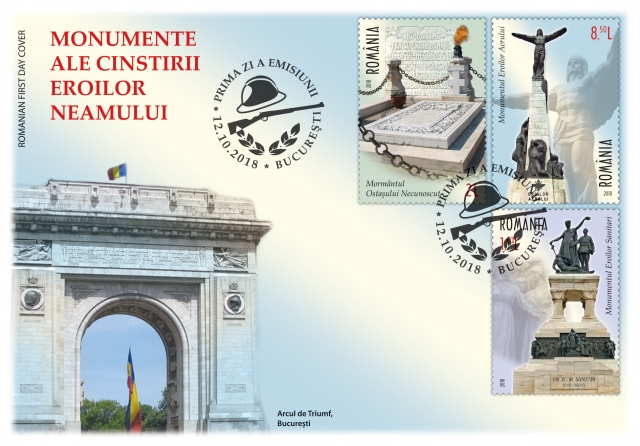 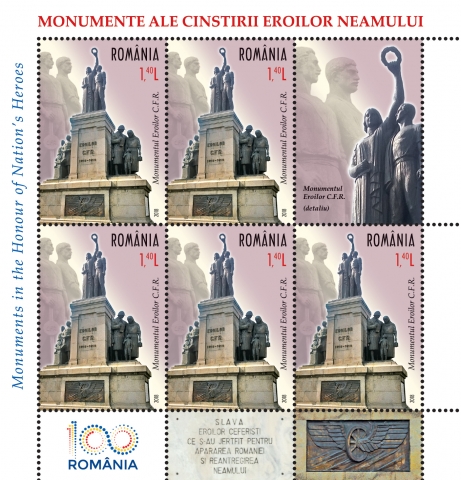 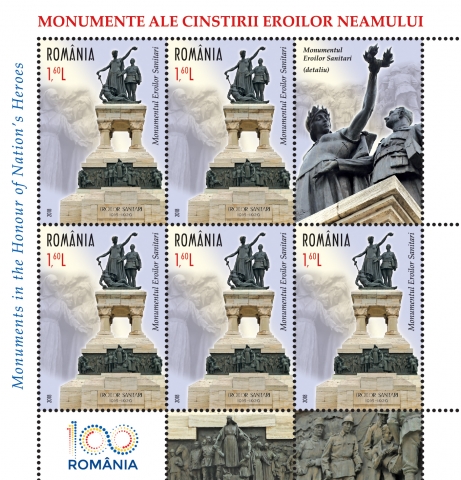 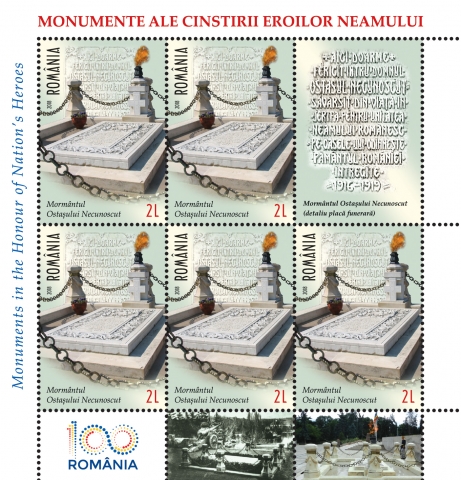 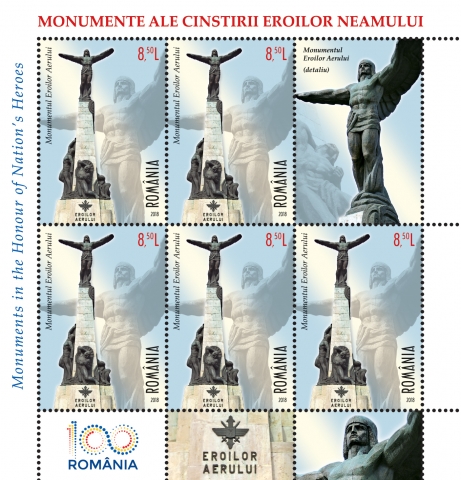 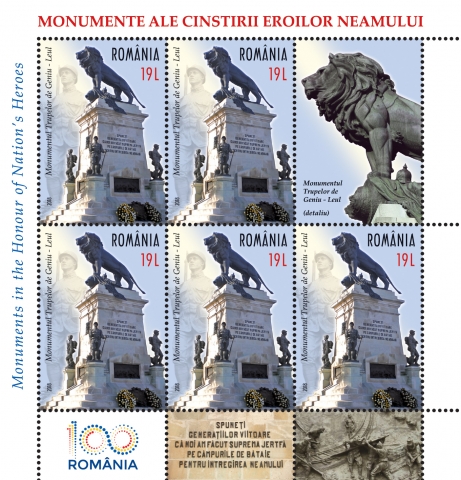 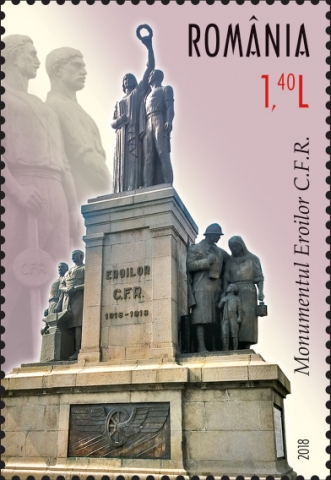 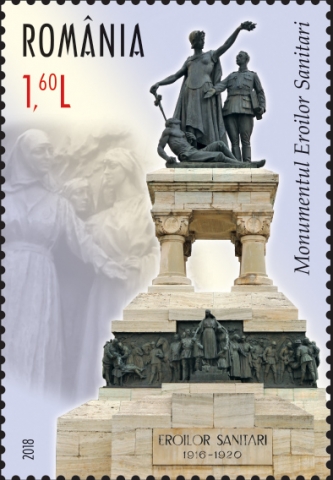 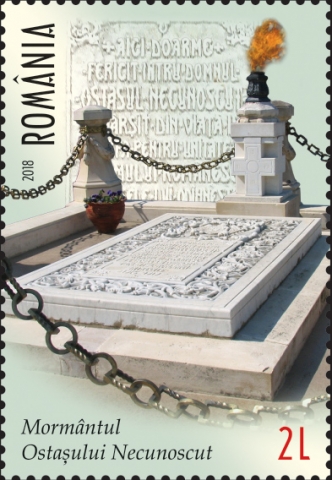 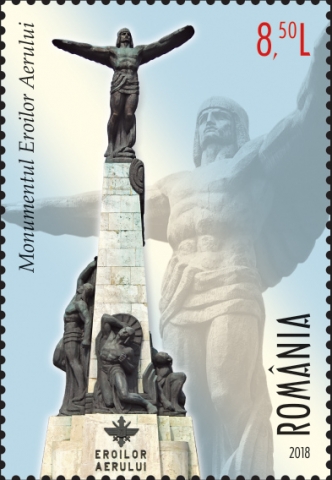 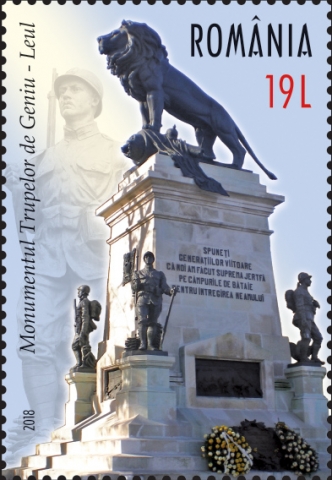