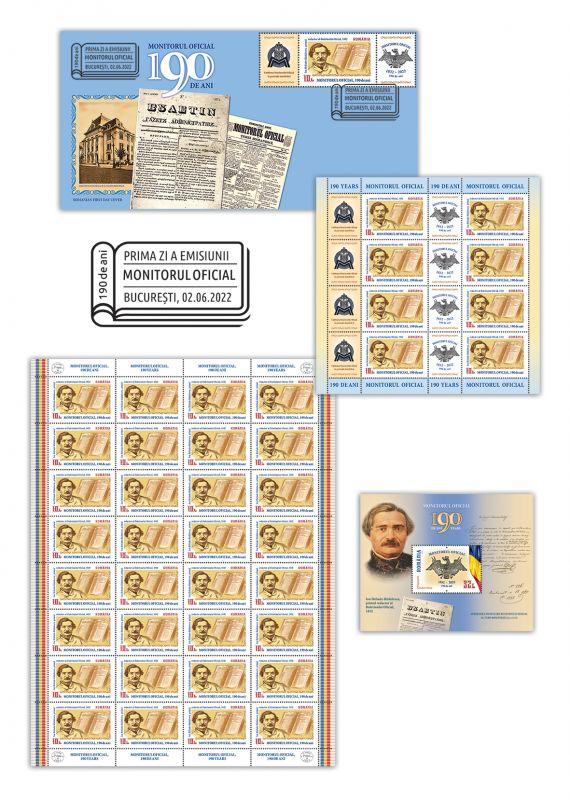 Romfilatelia includes in the philatelic theme of the institutional anniversary events a new postage stamps issue „Monitorul Oficial, 190 years”, which will be introduced into circulation on Thursday, June 2nd, this year.

The philatelic elements of the issue are represented by a postage stamp with the face value of Lei 10, a philatelic souvenir sheet with a postage stamp having the face value of Lei 32 and a First Day Cover. The graphic elements of the stamp and of the perforated souvenir sheet present the portrait of the first editor of Monitorul Oficial, Ion Heliade Rădulescu, along with the facsimiles of the first issue of the publication and, respectively, of the founding document of it, drafted in French.

Although in 1832 the Romanians were not within the borders of a single state, but only a part of them were within the borders of the two principalities, Wallachia and Moldavia, the political, economical, administrative and even cultural necessities of the time imposed the appearance of the first official paper of the state, materialized on November 18th, of the same year.

The transition to the official state newspaper was made in Wallachia on December 8/20th, 1832 and in Moldavia on June 22nd / July 4th, 1833, by implementing the provisions of the Organic Regulations. Under these conditions, the first issue of the Administrative Gazette Bulletin is released, with a programme signed by none other than Ion Heliade Rădulescu.

Starting with issue no. 3, the publication changes its title to the Official Gazette Bulletin (Monitorul Oficial) and adds the country’s coat of arms.

The country’s documentary history has been faithfully reflected for 190 years in the pages of Monitorul
Oficial, a singular case in the Romanian press: its uninterrupted issue. It is harmoniously complemented by the past of the institution, which, in addition to the publication of Part I, which contains legislation, also meant the issue of unofficial parts, especially interesting in terms of announcements contained: parliamentary debates, government projects, news from abroad, literary and theatre criticism, scientific and historical studies and dissertations, administrative, judicial announcements, etc.

Also, the beginnings of the Publishing House merge with those of the Monitorul Oficial publication.
From the very beginning, the editor’s duties were substantially beyond the strict editorial control of the text. In fact, the Organization Rules and Regulations of 1873 provided, among other things, that they would write a political bulletin after foreign newspapers, translate foreign dispatches, read all newspapers in the country, and put down the paragraphs concerning administrative matters which they submitted to the relevant minister for analysis.

Monitorul Oficial Publishing House still publishes works that promote national culture, the pride of
the ‘30s and ‘40s: publications are in various fields, such as law, art, history, diplomacy, etc. Through titles with special graphics, including bilingual or trilingual editions, made at its own printing house, one of the best performing in the country, it continues to faithfully render the pulse of society and to beautify its rhythm.

Romfilatelia thanks the representatives of Monitorul Oficial Publishing House for the documentary and photographic support granted for the development of this postage stamps issue. 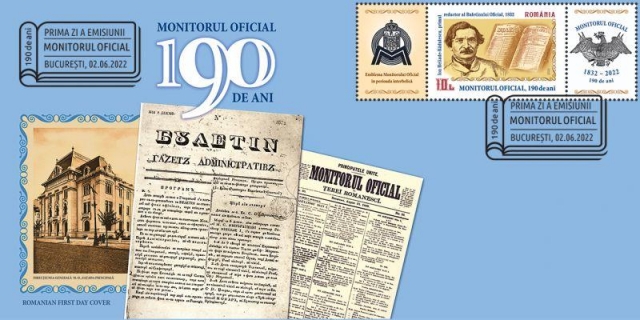 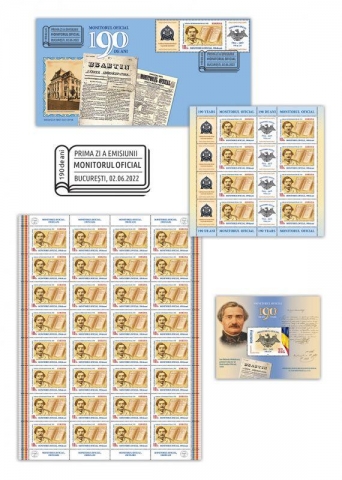 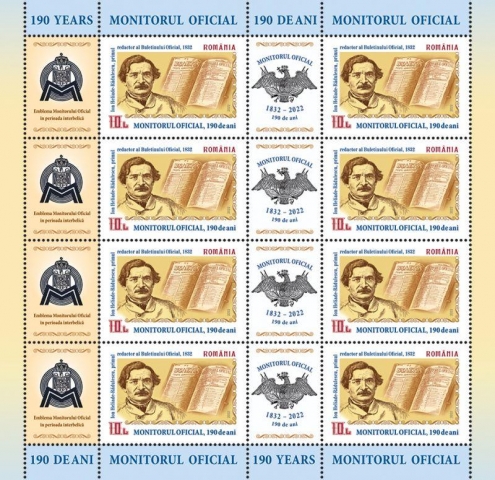 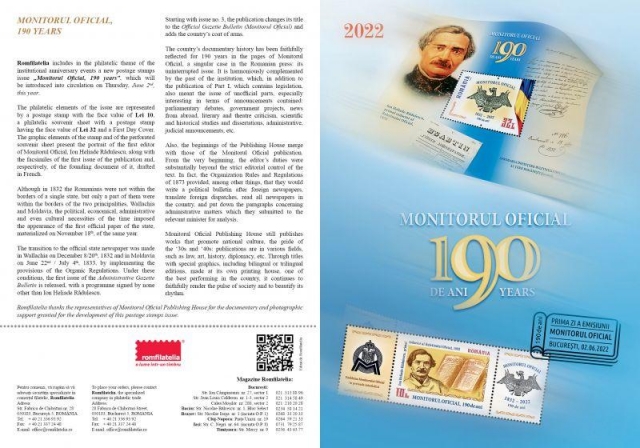 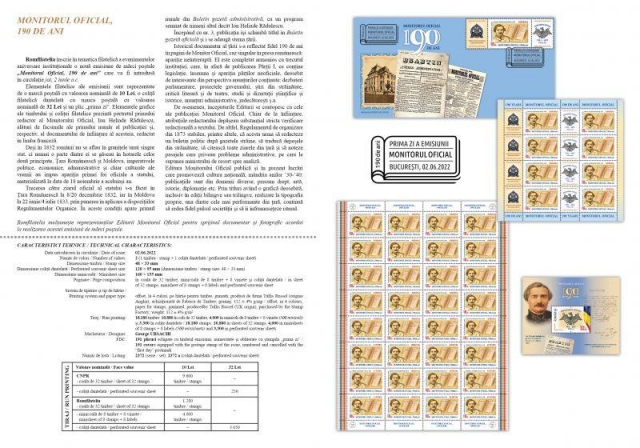 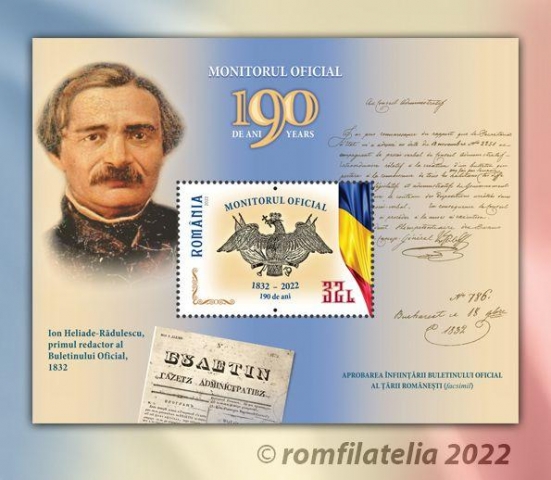 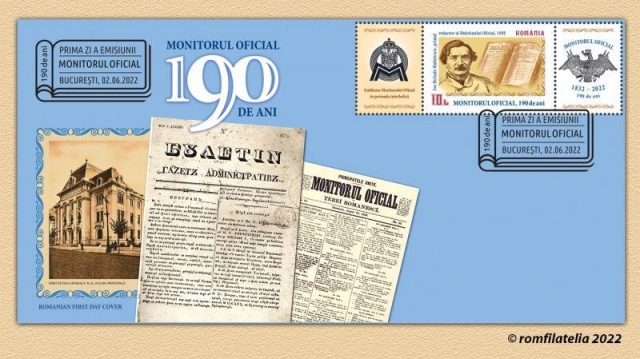 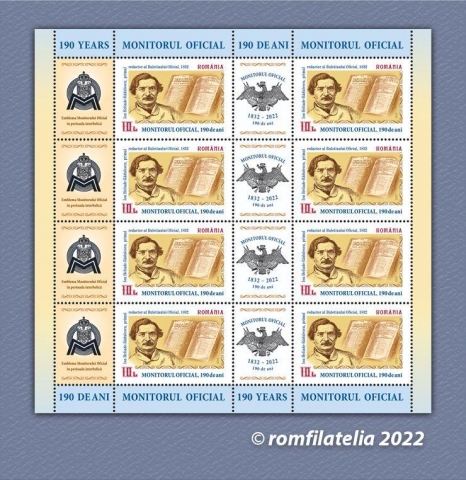 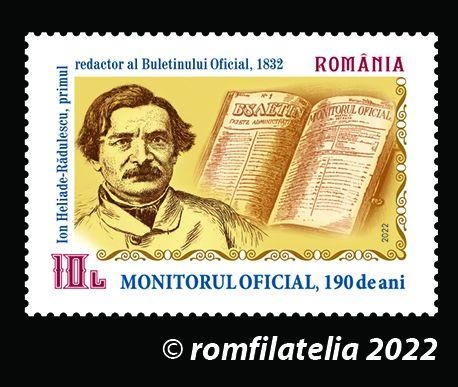 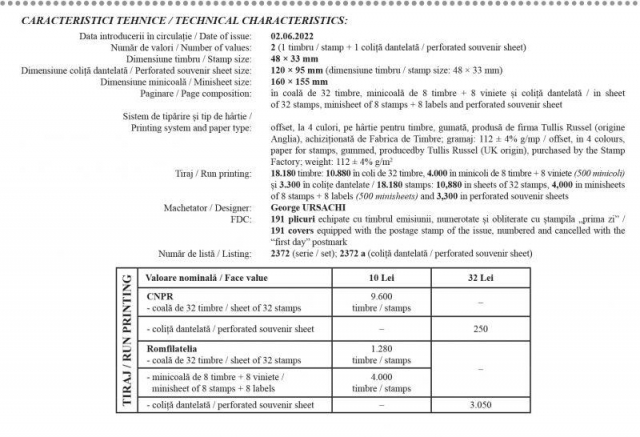 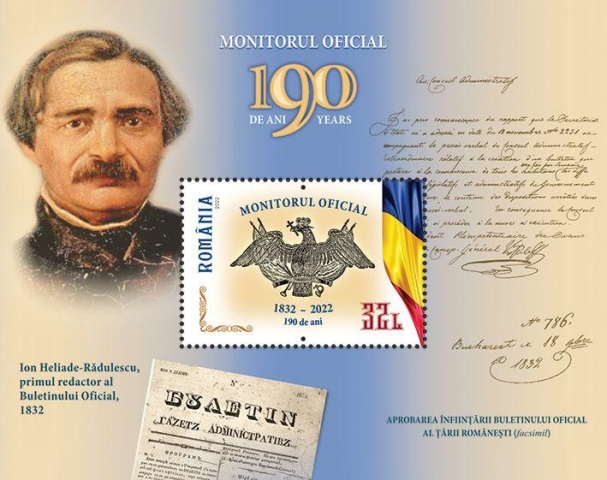