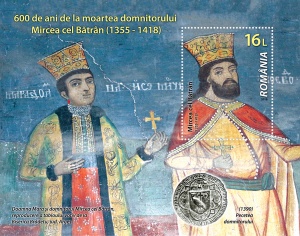 Mircea the Elder, an emblematic figure of the Romanian Middle Ages, was the voivode during which Wallachia reached the height of its political power and territorial reach. Mircea was not only the ruler of Wallachia, but also a senior of some important Transylvanian lands and the only ruler of the Romanian lands near the Black Sea.

Romfilatelia honors the great Voievod (ruler) of Wallachia,
by introducing into circulation the postage stamp issue Mircea the Elder, 600 years since death. The new issue will be available on Wednesday, January 31st, 2018,  in Romfilatelia’ own shops network in Bucharest, Bacau, Brașov, Cluj-Napoca, Iași and Timișoara and online on https://romfilatelia.ro/store/.

On the stamp with the face value of Lei 8 is illustrated the statue of Mircea the Elder, from the patrimony of the National Museum of Romanian Literature. The statue is created by the sculptor Paul Vasilescu (1936-2012), an artist who remarked through his works of monumental and portrait art.

Born in 1355, Mircea the Elder began his reign in Wallachia on December 23rd, 1386, as the fifth ruler in the line of Basarab the Founder. In Romanian medieval tradition, there was no habit of counting the rulers with the same name, so he was referred to as “the Elder”, meaning “from ancient times”, in order to be distinguished from Mircea Ciobanul, a ruler from the 16th century. Mircea was the son of Radu Voda, from his second marriage, to Calinichia, and acceded to the throne after the death of his half-brother, Dan. On his mother’s side, he was related to boyar families of Oltenia, and through his wife, Lady Mara, he was related to Władysław Jagiełło, the king of Poland. Mircea had several sons who, after his death, fought for the throne of Wallachia.

His reign is marked by many political, economic and cultural achievements. During the rule of Mircea the Elder, the territory of Wallachia became the largest in its history: its western extension was Banatul de Severin, a fief granted by Sigismund of Luxembourg, to the north Wallachia was beyond the Carpathians, up to the spring of river Olt, and towards east, Wallachia comprised the newly conquered Dobrogea and different territories north of Danube Delta. Mircea the Elder promoted an active foreign policy, oriented towards peaceful relations with the neighboring countries. He became a vassal to Sigismund of Luxembourg, who in return granted him numerous fiefs, such as Amlas, Fagaras, Banatul de Severin, Bran Castle and the estate of Bologa. The relation with Moldova was also a good one: through the ruler of Moldova, Petru Musat, he managed to make an alliance with Poland.

Mircea also founded numerous monasteries and churches. These religious establishments turned into real cultural centers, through the activity of transcribers and calligraphers, as well as through the founding of schools of sacred painting.

The postage stamp issue is completed by a First Day Cover, as page composition there were used a sheet of 32 stamps, a minisheet of 8 stamps + 1 label, and a perforated souvenir sheet.

Romfilatelia thanks His Eminence Calinic, Archbishop of Arges and Muscel, the National Museum of Romanian Literature, the Pitesti Municipality and the “Nicolae Iorga” Institute of History for the documentary support given for the creation of this postage stamp issue, and the photographer Lucian Tudose.