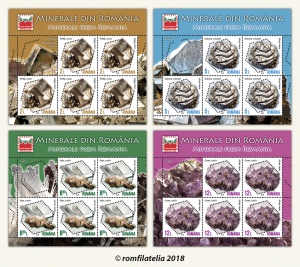 Romfilatelia returns with a theme appreciated by collectors, by launching the postage stamp issue Minerals from Romania, highlighting, once again, unique exhibits from the heritage of the „Victor Gorduza” County Museum of Mineralogy in Baia Mare.

The „Victor Gorduza” County Museum of Mineralogy in Baia Mare, considered by experts to be the largest regional mineralogical museum in Europe, has a collection of over 20,000 pieces, of which about 17,000 are mineral samples. Of these, more than 1,000 mineral samples, ores, rocks and fossils, collected exclusively from the outcrops and underground mines that operated in Baia Mare and the adjacent areas of Maramures and northwestern Romania – many of them being unique or world rarities – can be seen in the permanent exhibition.

The four stamps of the issue illustrate minerals from the collection of this museum, as follows:

The sample of pyrite and quartz minerals, originating from Tibles area, is represented on the stamp with the face value of lei 2.

The sample of galena and semseyite minerals, extracted from Herja Mine is reproduced on the stamp with face value of lei 5.

The stamp with the face value of lei 8.50 shows a sample from Cavnic Mine, with gypsum and calcite minerals.

Originated from Herja Mine, the sample of quartz and calcite minerals is illustrated on the stamp with the face value of lei 12.

Pyrite, a mineral from the sulphides class, with the chemical formula FeS2, crystallizes in the cubic system and is the main mineral used for the production of sulphur and sulphuric acid, first-class raw materials of the chemical industry. In the sample reproduced on the stamp issue, we can see well-individualized cubic crystals of pyrite, representing specific yellow-bronze-colored striations, a strong metallic luster, intertwined with smaller yellow-bronze crystals, frequently irisated. Large and very bright cubic crystals from Tibles Mountains are famous in Baia Mare region.

Galena, a mineral from the sulphides class, with the chemical formula PbS, is distinguished by beauty and spectacularity, which crystallizes in the cubic system. It is the most widespread lead mineral and the most economically important, being one of the first minerals exploited since ancient times. It is easily distinguished both due to the gray color, bright metallic luster, and crystallographic shapes of great octahedron, cube, romboidal dodecahedron size, or combinations thereof. In Romania, the mineral is more widespread in Băiţa (Bihor County), Baia Sprie and Cavnic (Maramures County) Mining Basin.

Gypsum, a mineral from the sulfates class, with the chemical formula: CaSO4•2H2O (calcium hydrated sulfate), crystallizes in the monoclinic system and has a low hardness. It is colorless (in pure form), white, gray, sometimes yellowish or reddish-brown. Most often, it has a shiny luster and is transparent. It can be found in the form of parallel or radial aggregates, sometimes twinned by „dovetail” type. Most times, it appears as independent crystals, perfectly transparent, with tabular or columnar habitus, such as the sample reproduced on the stamp.

It is mostly used in the binders industry and in the manufacture of plaster, but also in medicine, for fracture repair, as bandage or molding in dentistry. In archeology, paleontology and art, it is used for restorations and statues of pure gypsum or mixed with other minerals.

The most frequently encountered mineral in the rocks of the Earth’s crust, with the chemical composition SiO2, the quartz, belongs to the silicate class, crystallizing in the trigonal system. In the Baia Mare region, it appears under the most diverse morphological, coloristic and concrescence forms. Generally, quartz crystals have a columnar-prismatic habitus, with prism crystallographic surfaces and pyramidal ends, and are overgrown in parallel. It is used in the production of glass, solar cells, semiconductors, optics and in the manufacture of precision instruments. The colorful varieties of quartz, especially the one called amethyst, of purple colour, represented on the stamp issue, are considered semi-precious stones and are used to make jewelery.

Gold (Au) is found in nature, either as a native element, such as the sample illustrated on the „first day” issue envelope (gold, sphalerite, quartz, originating from Cavnic Mine), or in the composition of other minerals (especially sulphides and sulphurs). It crystallizes in the cubic system and is the first of the precious metals processed by mankind, whose history and evolution influenced it. Gold is used both for jewelry and dental instruments, electronic components and stainless steel cladding. Gold in a muscular aggregate, very bright, of intense golden yellow colour, forms impressive samples due to their size, which have been described over time in the Baia Mare mining area, at Cavnic Mine.

Romfilatelia thanks „Victor Gorduza” County Museum of Mineralogy in Baia Mare for the documentary and photographic support granted for the achievement of this postage stamp issue. 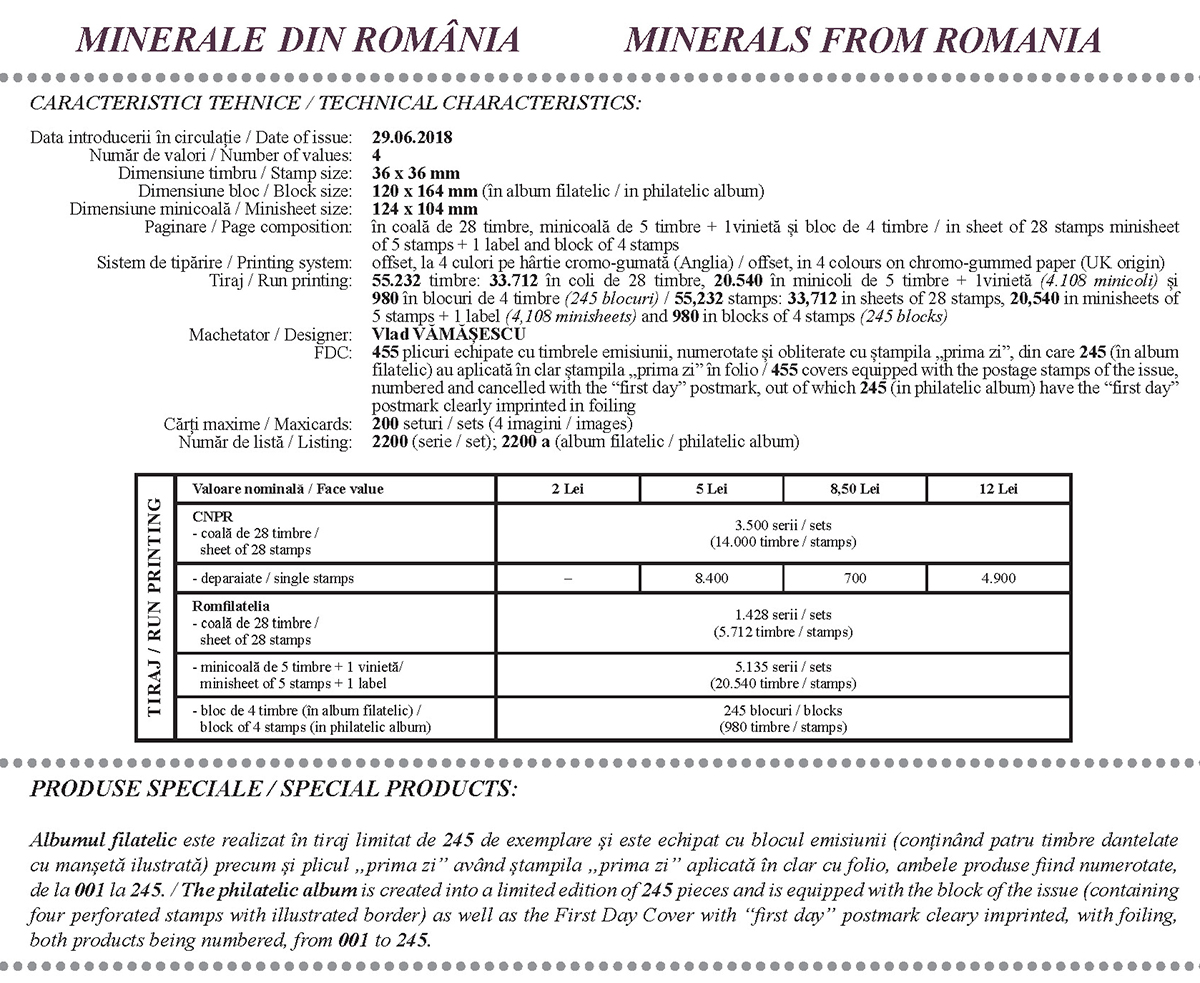