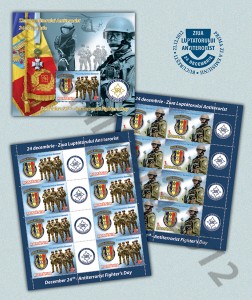 The 8th decade of the XXth century produced a tragic inheritance for what terrorism was to become in the world over time …In the name of “a cause to defend”, vigilantes with or without a country hijacked planes, took hostages and detonated bombs… The massacre during the Munich Olympic Games in 1972 or the assassination of the Italian Prime Minister, Aldo Moro in 1978, are two of the tragic events that members of terrorist organisations such as BLACK SEPTEMBER or RED BRIGADES carried out at the time.

As a result of this global context, in 1974, inRomaniathere was established a small antiterrorist unit. The unit developed over time, both in terms of concept and organisational perspective. Therefore, on December 15th, 1977, it turned into the Special Anti-Terrorist Fighting Unit (USLA).

During its activity, the USLA had to counter the many attempts various members or followers of terrorist organisations made to enter the country.

In December 1984, in front of the Bucuresti Hotel in the capital city, the dissident Palestinian Organisation Al Fatah – The Revolutionary Council (Abu Nidal) committed a terrorist attack resulting in the death of a Jordanian diplomat. Few years later, same city, in the spring of 1985, in the Grozavesti student campus, Arab terrorists placed explosive mechanisms under cars owned by leaders of the Syrian Students’ Organisation inRomania. Two USLA specialists lost their lives while trying to deactivate the explosive devices.

1990 is the “birth year” of the Antiterrorist Brigade.

This new start meant a confrontation with other terrorist challenges: in August 1991, inBucharest, an Indian commando of the Baabar Khalsa terrorist organisation attempted to assassinateIndia’s accredited ambassador to our country. Thanks to the intervention of the antiterrorist fighters, the attempt failed. Later on, in 1995, the Antiterrorist Brigade managed to detect the presence in our country of several “Japanese Red Army” terrorist organisation leaders, thus preventing them from taking action on Romanian soil.

After September 11, 2001, the Antiterorist Brigade changed and developed so as to meet the demands and responsibilities set by the role of the Romanian Intelligence Service (SRI) as national antiterrorist authority. These transformations were based both on its long experience and the vision outlined in the National Strategy for the Prevention and Fighting of Terrorism (after the 9/11 attacks in the USA, Romania was one of the first countries in South-Eastern Europe to adopt a doctrinal document intended to advance protection against terrorism).

In sign of recognition for its established expertise and counterterrorist performance along the years, the fighting flag of the Antiterrorist Brigade was decorated, in 2002, with the National Order “FOR MERIT” in the rank of Knight.

Focusing on the fundamental power of information, Romanian antiterrorist forces placed the concepts of prevention and cooperation at the heart of the National System for the Prevention and Countering of Terrorism (SNPCT), a body which is technically coordinated by the Romanian Intelligence Service. Furthermore, in order for the System to efficiently accomplish its missions, in 2005, SRI also established the Antiterrorist Operative Coordination Centre.

The System’s internal cooperation mechanism was designed so as to meet the need for strategic step by step thinking within a broad global framework. As a full NATO and EU member state,Romaniastands, together with its partners, firm and unequivocal to its commitment to fight terrorism.

Every year, on December 24th, the Antiterrorist Brigade commemorates the ANTITERRORIST FIGHTER’S DAY. Then, the unit’s fighting flag is flown at half mast, in sign of profound respect for its heroes.

For any antiterrorist fighter, the sacrifice of the Unit’s pioneers represents a lesson of duty fulfilled and a performance worthy of an elite squad.

This year ROMFILATELIA introduces into circulation a postage stamp issue dedicated to this event.

We thank the Romanian Intelligence Service for the support granted in the accomplishment of this postage stamps issue. 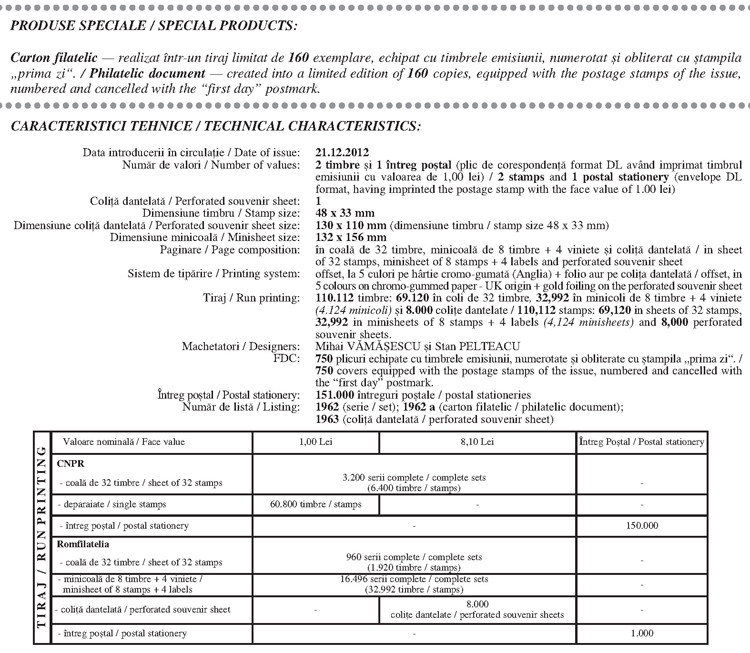