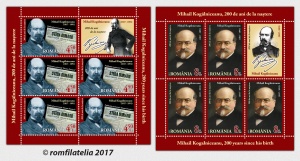 Romfilatelia celebrates the life and personality of the great politician and cultural man through the postage stamp issue Mihail Kogalniceanu, 200 years since his birtH.

Being a first-rate personality of the 19th century, Mihail Kogalniceanu is also one of the creators of Modern Romania. His biography is therefore mixed-up with the very history of this century.

Kogalniceanu’s political and diplomatic work can be ordered by the chronology of the essential moments in which it has taken place: leader of the 1948 Movement, spokesperson for the Movement’s generation, developer of an action program for the achievement of the ideals of his time. Kogalniceanu represents a leading character of the Unionist propaganda and the main accomplisher (together with Al. I. Cuza) of the 1859 Union.

In March 1840, Mihail Kogalniceanu opened a publishing house and his own printing house which played an important role in the development of national culture and literature. Here he printed most of the periodical publications he founded, including Literary Dacia. We must add to these, the characterization of George Calinescu, who considers that “Kogalniceanu’s most valuable gift is the untiring criticism, in a constructive, ardent form, and without sterile sarcasm”.

On November 10, 1852, he married Ecaterina Jora (1827-1907) in Iasi. Also this year, the Chronicles of the Land of Moldavia was published in three volumes. Three years later, he founded, in Iasi, the Danube Star newspaper, the main press branch of the Unionist Movement, illustrated alongside the portrait of he who would be its editor, on the stamp with the face value of Lei 4.50.

The stamp with the face value of Lei 8 illustrates the portrait of the great politician, which can be found in the heritage of the Bucharest Municipality Museum.

On May 13, 1856, he was elected in the Union Committee, alongside Vasile Alecsandri, Costache Negri and Constantin Hurmuzachi.

After electing Alexandru Ioan Cuza as the ruler of the United Principalities, Kogalniceanu was elected as a member of the Central Commission, which had the obligation to draft a common law for the two Principalities (1859 – 1860). Between 1860 and 1861, Kogalniceanu was the head of Moldavia’s government. He delivered in Parliament his famous speech on the Allotment of peasants. He tirelessly militated for the formation of a single government and the election of a single capital for the state that will bear the name of Romania, from 1862. Starting with 1863, Kogalniceanu holds important positions in the leadership of the state: prime minister, interior minister and foreign minister. In the Assembly of Deputies of May 9, 1877, Kogalniceanu proclaimed the Romanian state independence.

Elected on May 29, 1868 as a member of the Academic Society (the Romanian Academy), Kogalniceanu delivers his last speech in this high forum on the occasion of its 25th anniversary.

He positioned himself as a brilliant diplomat for the achievement and recognition of the 1877 State Independence.

Mihail Kogalniceanu died on June 20, 1891, in Paris, at Saint Jean-de-Dieu Surgery Clinic (rue Oudinot), remaining a leader of Modern Romania’s culture and history. As a creative genius, Kogalniceanu harmoniously combined culture with politics, a fact that led the great Nicolae Iorga to consider him “the greatest cultural and political leader of the Modern Age”.

Romfilatelia thanks the National Museum of Romanian Literature, the Bucharest Municipality Museum, the “Mihail Kogalniceanu” Memorial Museum from the National Museum Complex Moldavia Iasi and the National Archives Iasi County Service for the documentary support granted in the creation of this postage stamp issue. 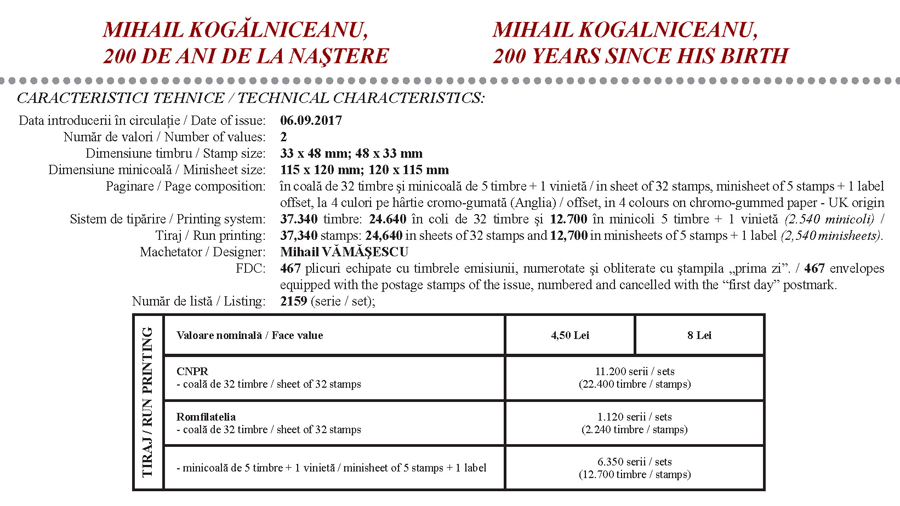