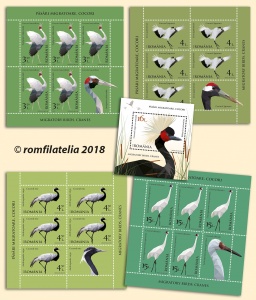 Romfilatelia resumes its series of projects dedicated to Fauna, a theme that collectors appreciate so much, by introducing into circulation the postage stamp issue Migratory birds, Cranes.

The cranes, these long-necked, long-legged, elegant feathered creatures, similar-looking to aigrettes and storks, belong to one of the oldest families of birds.

One of the most refined and noble flying animals, delicate and needful, cranes belong to the Gruidae family, the group of Gruiformes. There are 15 species of cranes, living on all the continents except South America and Antarctica. These diurnal birds live in calm wetlands, most of the species preferring the vast swamps and wet grasslands, while the others like better dry habitats, breeding even in dry areas, provided there is a watercourse in the proximity. Their food is very diverse, and cranes feed on plants (buds, seeds, and fruits), invertebrates (mollusks, crustaceans, or insects) and even on small vertebrates (fish, lizards, snakes, rodents).

Cranes are renowned for their graceful posture and fascinating movements, looking like ballet dancing. Their beautiful mating dance also help them to socialize, and is accompanied by loud, trumpeting calls and by jumps.

Many crane species are migratory birds and the constant destruction of their natural environment, severely affecting the fauna and flora, diminish the chances of survival of these wonderful feathered creatures, force them to live into closer contact with humans.

On the stamp with the face value of Lei 3.50 is illustrated the Australian Crane (Antigone rubicunda), also known as Brolga. It lives in Australia. In the Northern regions of the Australian continent live more than 100,000 specimens, while the Southern populations are endangered. This crane does not migrate, but it travels towards the center of the continent, in search for the most convenient habitats. In color, it has a light-grey plumage with a red-orange band around its head, as well as a black beard.

The stamp with the face value of Lei 4 depicts the Japanese Crane (Grus japonensis), also known as the Manchurian Crane. This is the second rarest crane species and it is also endangered, with a population estimated at no more than 2,200 individuals. It is one of the most delicate and beautiful cranes. Its remarkable courtship dancing is a true show, while its long-life commitment to a single partner is impressive. Its pure-white plumage is completed by black spots on the neck and chicks and by the black secondary feathers on the wings. On its head, the Japanese Crane has also a red spot, turning into carmine under stress or irritation.

The Small Crane (Anthropoides virgo), also known as the Demoiselle Crane, is depicted on the stamp with the face value of Lei 4.50. It breeds in large regions of Central Asia, Eastern Europe, while some smaller populations can be also found in India and East-Central Africa. The European population is relatively small, totalizing up to 25,000 nesting pairs, most of them located in Eastern Europe. This crane also features in Romania, with accidental appearances in the Danube Delta and on the Black Sea shore, usually in a small number.

The Small Crane is a fully migratory bird, taking every year the same routes. The migrations start in August-September, when this crane leaves the breeding territories from Central Asia to winter in different wetlands from East-Central Africa and India: swamps, flooded savannas and lakeshores. It comes back in March-April. The small crane-pairs are monogamous and typically mate for life. Their mating dances are dazzling, as the partners make head turns, plump their tail-feathers, jump and stretch their wings.

On the stamp with the face value of Lei 15 is illustrated the Siberian Crane (Leucogeranus leucogeranus), also known as the White Crane. This crane undertakes one of the longest migratory routes and is a critically endangered species. Currently, just three populations of the Siberian Crane, estimated to number just a few thousand birds, have been surviving into the wild. The easternmost population is the most numerous one, lives in the North-East of Siberia, and migrates to China during the winter. Another population resides in the West of Siberia and annually migrates to India, while the westernmost population probably lives in the West of Russia and winters in Iran.

The stamp of the perforated souvenir sheet has the face value of Lei 16, and illustrates the Black Crowned Crane (Balearica pavonina), one of the most beautiful and magnificent birds in the world. Its habitat spreads through the sub-Saharan Africa, on both sides of the continent, but especially in the East, where more numerous populations can be found. In West Africa, black-crowned cranes live in Senegal, Nigeria, Gambia, and in East Africa in Sudan, South-Sudan, Ethiopia and Kenya. It is one of the few crane species that nests and spends the night in trees. Its plumage is slate-gray, nearly black in color, completed by white feathers on wings, while the most precious decoration is its golden-yellow, pumped crown.

Romfilatelia thanks “Grigore Antipa” National Museum of Natural History from Bucharest for the documentary support given to this postage stamp issue and the photographer Daniel Petrescu. 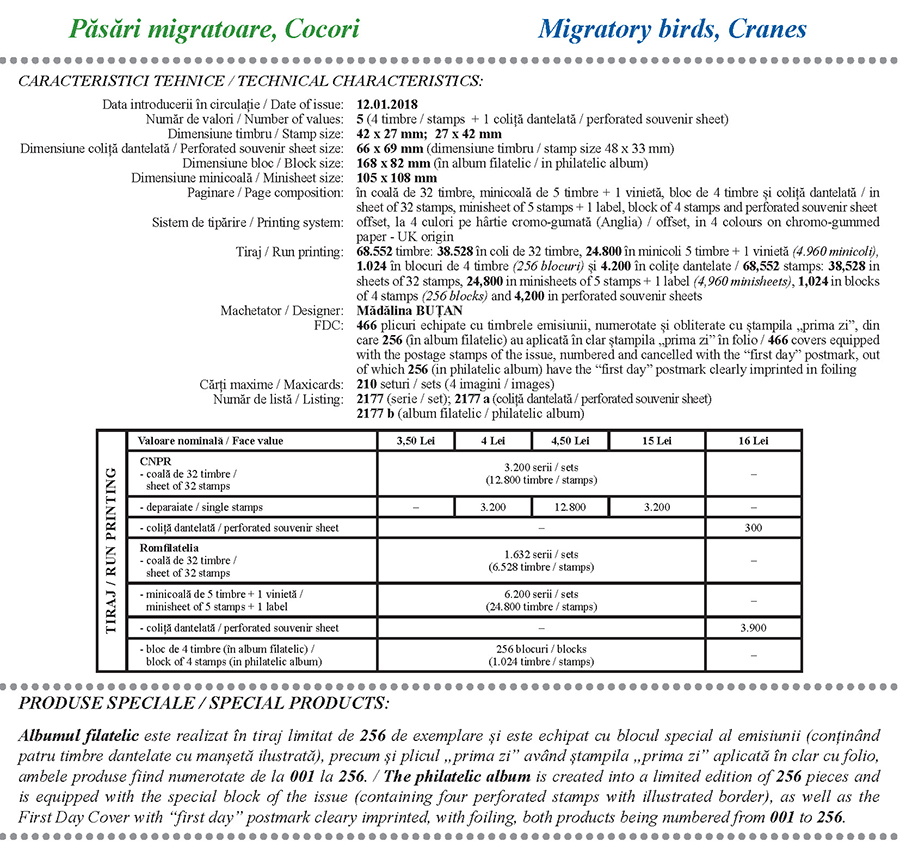