The issue, consisting of four postage stamps and a First Day Cover, illustrates the following species: the Eurasian woodcock, the grey partridge, the hazel grouse, the greylag goose, the European turtle dove and the great cormorant.

The Eurasian woodcock – Scolopax rusticola, represented on the first stamp with the face value of Lei 3.50, is a solitary bird, very well camouflaged by the rust colours of its plumage, like leaves fallen on the ground. The Eurasian woodcock can be seen in the temperate and boreal forests of the Palearctic region. In Europe, the largest population of nesting birds is concentrated in Belarus, Finland and Sweden.

It nests in the mountain area, in beech and conifer forests. It hatches in isolation. It builds the nest in grooves in the ground that it lines with plant debris.

Subject to constant pressures of habitat reduction and drastic modification, this species has an unfavourable conservation status. In Romania, according to the Law, the Eurasian woodcock can be hunted between September 1st and February 28th.

The grey partridge – Perdix perdix, depicted on the first stamps with the face value of Lei 4.50, is a sedentary species, but in severe winters it can migrate short distances in search of food. The number of the European population counts between 1,700,000 – 2,900,000 specimens. In the last decades of the 20th century, it experienced a pronounced decline in Romania as a result of habitat destruction and the large-scale use of pesticides in agriculture.

It populates agricultural crops, meadows, hayfields and uncultivated land, where it builds its nest on the ground between the grasses. It lays 10-20 eggs from the beginning of April to the beginning of May, which only the female incubates for 23-25 days.

In Romania, according to the law, the grey partridge can be hunted between September 15th and December 31st.

The hazel grouse – Tetrastes bonasia, illustrated on the stamp with the face value of Lei 6.50, sometimes called the hazel hen, is a sedentary species, well represented in some mountainous areas of the country. It lives especially in deciduous forests starting from 300 m altitude up to the floor of coniferous forests.

It builds its nest in a small groove in the ground, well camouflaged in the vegetation at the base of the trees. Starting from April, the female lays a clutch of 8-10 eggs that it incubates for 21-25 days.

In Romania, according to the law, the hazel grouse can be hunted between September 15th and November 30th.

The greylag goose – Anser anser, depicted on the last stamp with the face value of Lei 16, is a migratory species that arrives in our country in February and leaves for the postnuptial migration in November, traveling to the north of Africa. In late autumn, they gather in groups, often flying in V-shaped flocks led by the most experienced members of the flock.

The pairs that nest in the country prefer the Danube Delta and some lakes in the south of the country. The greylag goose is the largest species of geese found in our country, weighing up to four kg.

In Romania, according to the law, the greylag goose can be hunted between August 15th and February 15th.

The European turtle dove – Streptopelia turtur, reproduced on the perforated souvenir sheet having the stamp with the face value of Lei 32, is a migratory species, it arrives in our country, in the spring, in the second half of April. The autumn migration starts in September and ends in October. For nesting, they prefer the edges of forests, large parks, trees and bushes in vineyards, orchards or other agricultural crops. They install their nest in the crown of the trees. They migrate in small family groups. The nesting population in Romania is estimated at 10,000 – 40,000 pairs.

The European population has an unfavourable conservation status. In Romania, according to the law, the European turtle dove can be hunted between August 15th and September 30th.

Great cormorant – Phalacrocorax carbo, depicted on the First Day Cover, is a migratory species, but also with sedentary elements. They prefer deep, standing or flowing, sweet or salty water, but also the proximity of trees or rocks on which they can install their nesting colonies. 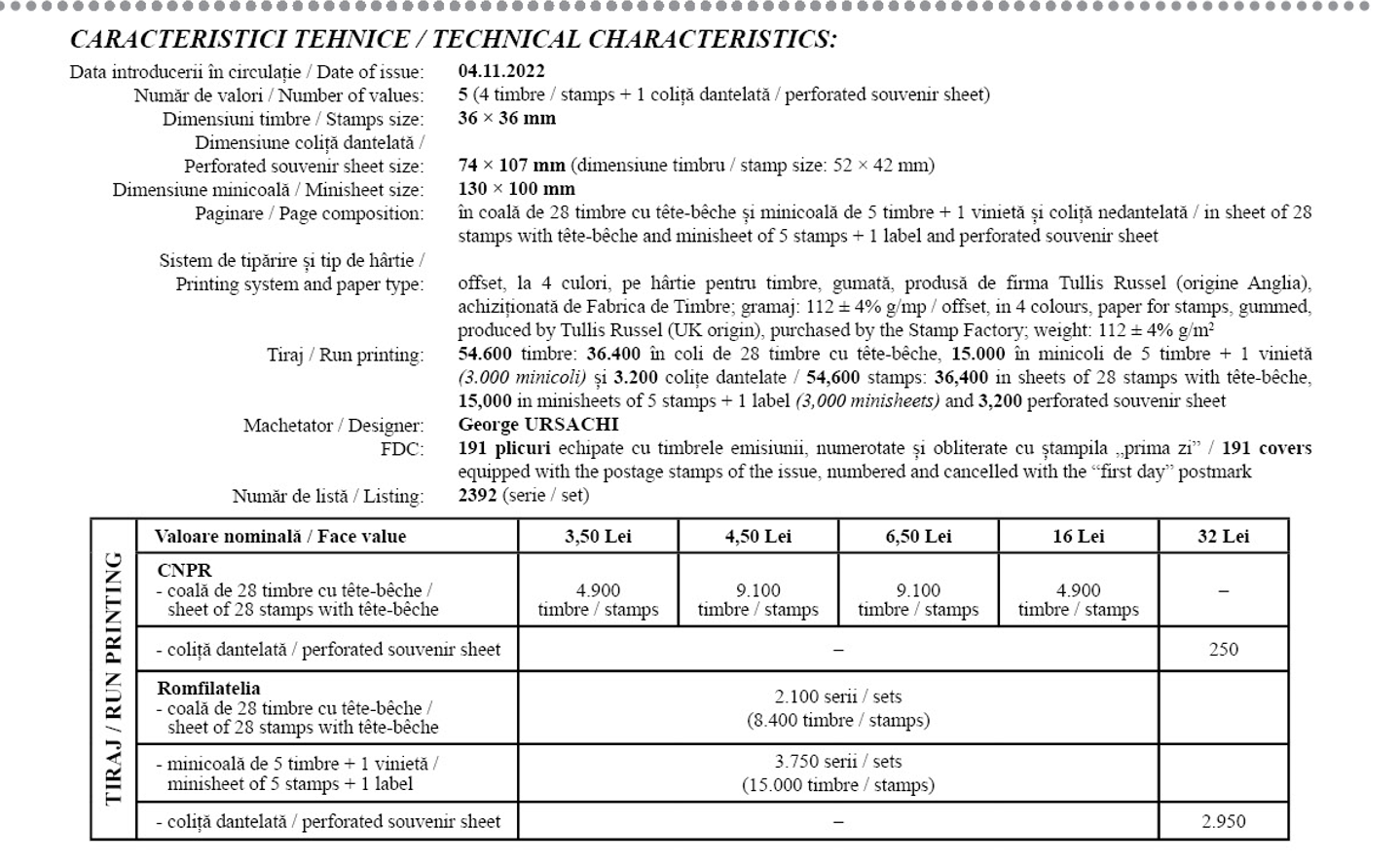