Romfilatelia adds to the theme of spirituality and history of the Romanian Orthodox Church an anniversary issue dedicated to a leading hierarch: “Metropolitan-Primate Calinic Miclescu, 200 years since his birth”. The issue, with a postage stamp haing the face value of Lei 10.00, will be introduced into circulation on Tuesday, April 5th. The images reproduced on stamp and on the First Day Cover of the issue present Calinic Miclescu in the representative dress of the high hierarchs of the Romanian Orthodox Church.

After holding several positions in the hierarchy of the Moldavian church: archimandrite, deputy bishop, abbot of Slatina Monastery, deputy metropolitan of Moldavia, Alexandru Ioan Cuza appointed him by decree on May 10th, 1865 Metropolitan of Moldavia, holding this position of church pastor until in 1875 when the first Metropolitan-Primate of Romania, Nifon Rusaila, passed into eternity. It should be mentioned that he was the first president of the Romanian Senate (1864) and the one who, in this capacity, welcomed Prince Carol de Hohenzollern in Bucharest, on May 10th, 1866.

On May 31st, 1875, Calinic Miclescu was elected Metropolitan-Primate of Romania, holding this dignity until his death (August 14th, 1886).

On April 11th, 1876, as a senator in law, at the suggestion of I.C. Brătianu, he was elected president of the Senate. Five years later, on March 14th, 1881, the Senate voted for the Law by which Romania became a Kingdom, and Carol I the first king of Romania. In his speech on this occasion, Metropolitan Calinic said:

“The Romanian clergy wholeheartedly associate themselves with this great national act and sharing the feelings of joy of the entire Romanian nation, ask the Almighty to bless this great act and make our dear Homeland prosper thousandfold under the act of Royalty and under the leadership of the Revered and our beloved sovereign Carol I”.

During his pastorate, the courses of the Faculty of Theology in Bucharest were opened (1881), the Printing House of Church Books was established (1882). A resounding event took place on March 25th, 1882, on the Holy Thursday of Easter, when members of the Holy Synod sanctified, for the first time, the Holy and Great Myrrh in the Metropolitan Cathedral of Bucharest, without asking the permission of the Ecumenical Patriarchate. This shows that getting autocephaly had become a formal issue. Ecumenical Patriarch Joachim II sent a very harsh protest. After several interventions, on April 25th, 1885, Ecumenical Patriarch Joachim IV confirmed the autocephaly of our Church. Having the joy of being the first Metropolitan-Primate of the Romanian Autocephalous Church, Calinic Miclescu sent a thank you letter to the Ecumenical Patriarchate, announcing the other autocephalous sister Churches as well as of this official recognition of the new status of the Romanian Orthodox Church.

Deceased on August 14th, 1886 in Bucharest, the first abbot of the Romanian Autocephalous Church was buried at Neamt Monastery. Maruca Cantacuzino-Enescu writes in her memoirs: “half of Moldavia took in a carriage, in a cart and on foot, in his last parade on earth, the elegant, magnificent, Most Holy Calinic Miclescu”.

Romfilatelia thanks His Beatitude Patriarch Daniel for the High Resolution and blessing, as well as the Metropolitan Church of Moldavia and Bukovina for the documentary support provided for the development of this postage stamps issue.

All images used to the development of the postage stamps issue, Metropolitan-Primate Calinic Miclescu, 200 years since his birth, for which Romfilatelia brings thanks, were provided by the Culture, Painting and Restoration Division of the Patriarchal Administration, with the mention that the picture illustrated on the stamp belongs to the Patrimony of the Patriarchal Residence, and the other photographs belong to the collection of the Library of the Holy Synod. 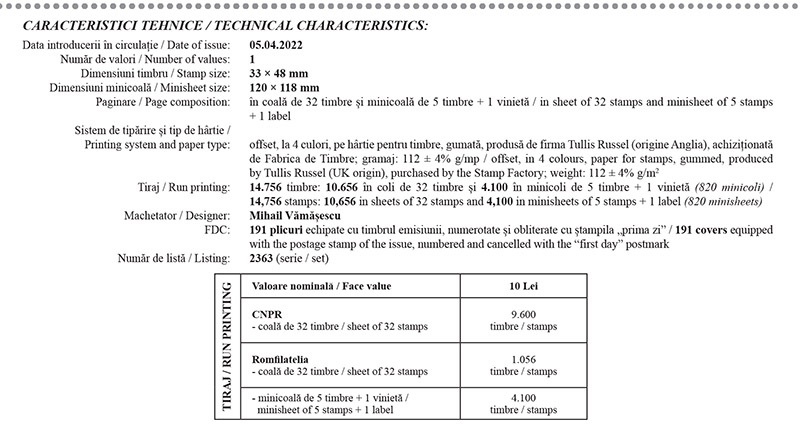