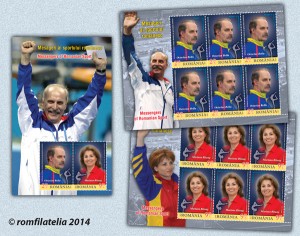 In 1976, Romanian gymnastics marks in the history of this sport a thrilling milestone through the participation of the women’s team to that year’s Olympic competition when they became the silver medallist of that edition, winning also a row of gold, silver and bronze medals in the all-around and apparatus finals, that rewarded the performances of Nadia Comaneci and Teodora Ungureanu, the gold gymnasts of the world.

TheMontrealvictory remained as a reference mark of the Romanian gymnastics, but if we are to think objectively about that period, we must admit there was a clear need to have a larger team of successful gymnasts that would promote the Romanian team on top of the world hierarchy. There was a need for a school that would train first class gymnasts, which meant assuming first of all the finding of some instructors that could meet the requirements.

The year 1981 marks in the sports agenda the moment that brings Octavian Bellu at the head of the women’ Olympic gymnastics team ofRomania as a coach.

Born on the 17th of February 1951, inPloiesti, Octavian Bellu starts his career as teacher and coach in his native county, namely at Petrolul Ploiesti Club, between 1975 and 1981.

Convened thereafter to train the Romanian women’s Olympic gymnastics team, the passionate and talented coach was going to achieve his first success in 1983, at the World Gymnastics Championships inBudapest, where his team becomes the silver medallist, winning also the third place in the all-round final and six medals in the apparatus finals.

Starting with 1992, Octavian Bellu, as head coach, begins to collaborate with a high class trainer, Maria Bitang (better known to the public as Mariana Bitang).

Born on the 3rd of August 1962 in Ramnicu Sarat, Mariana Bitang becomes, after graduating the National Academy of Physical Education and Sport, instructor at the Cetate Deva Sports Club.

As mentioned, her high class professional activity started with the collaboration with Octavian Bellu to prepare the women’s Olympic gymnastics team.

After the period 2005-2010, when Octavian Bellu and Mariana Bitang gave up the preparation of the women’s Olympic gymnastics team, in June 2010, the two Romanian emeritus sports promoters resume the training for the big international competitions in the field that consecrated them.

As a confirmation of the genuine values associated with the personalities of the two coaches, and the high class professionalism, the 2014 European Women’s Artistic Gymnastics Championships in Sofia (May 14-18, 2014) brought 9 medals to the Romanian team: the women’s team gold medal, the gold medal on floor exercise, the silver medal on balance beam, and the bronze medal on vault, plus the juniors’ victory, who won 4 silver medals and a bronze medal.

The issue of postage stamps Messengers of Romanian Sport, dedicated to the two renowned instructors and coaches, Octavian Bellu and Mariana Bitang, represents a tribute of esteem and high appreciations for the entire work and dedication in the service of promoting exceptional talents of Romanian sport attaining top positions in the world hierarchy.

Romfilatelia thanks the Romanian Gymnastics Federation for the documentary support granted in the accomplishment of this issue of postage stamps. 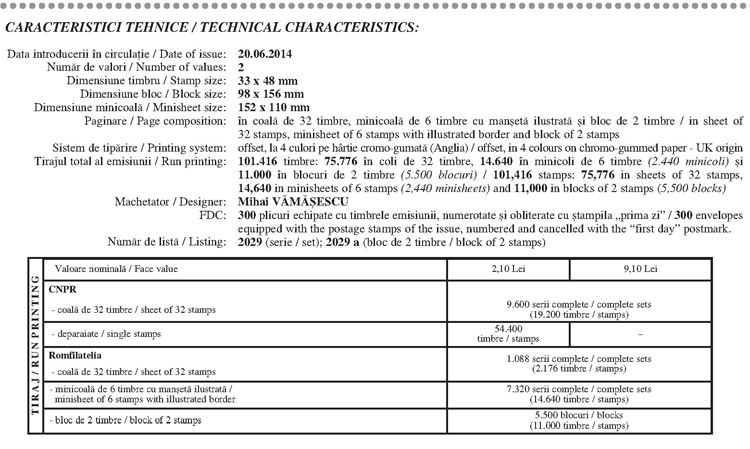