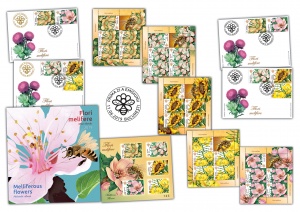 The Silver linden (Tilia tomentosa) is a deciduous tree, whose flowers are represented on the stamp with the face value of Lei 1.90. The Silver linden tree is part of the Tiliaceae family and is spread in Southeastern Europe. Cultivated for ornamental purposes, lindens are very appreciated for the beauty of the crown and the charming smell. In Romania, it is also known as tei cainesc, tei de toamna, tei balan or tei bun. The linden can be used for both its wood and flowers and sapwood, which have therapeutic indications in both animal and human medicine.

The Sunflower (Helianthus annuus) is represented on the stamp with the face value of Lei 5. This annual herbaceous plant belongs to the Asteraceae family and originates in northern Mexico and the United States of America. It was brought to Europe in 1510 and used as a decorative plant in the gardens and parks of Spain, Portugal, France, Belgium and Germany, being used as seeds producing plant for oil between the 17th and 18th centuries.  In Romania, it is also known as ierboaie, ochiul-soarelui, pantonea, ruja-soarelui, sora-soarelui or rumanita mare. The sunflower has multiple uses, being introduced into the food crop for oil or animal feed and used in human and veterinary medicine therapies, as well as in agriculture for its natural fertilizer properties, obtained after burning.

The Canola (Brassica rapa subsp. oleifera) is grafically reproduced on the stamp with the face value of Lei 8.50 lei. It is an annual herbaceous plant, which is part of the Brassicaceae family, has been grown since antiquity by peoples around the Mediterranean Sea and the Near East, spreading to India and countries of Asia.  It is used in the industry for the production of oil and animal feed, and, due to its healing properties, it is also used for human and veterinary medical treatments.

The Apple (Malus domestica) whose flowers are illustrated on the stamp with the face value of Lei 12 is a cultivated tree that is part of the Rosaceae family, being cultivated globally in over 10,000 varieties. The apple tree can have a longevity of up to 150 years, depending on the parent stock. In many cultures, it is seen as a tree of life, its flowers heralding the coming of spring.  It is used in the food industry for its sweet fruits, and its wood is used in manufacturing various furniture items. The apple tree is also known for its therapeutic properties, being used in both human and veterinary medicine.

The philatelic album is created into a limited edition of 232 pieces and is equipped with the block of the issue (containing five imperforated stamps with illustrated border and a thematic graphic symbol inscribed in hexagonal perforation) as well, the set of two First Day Covers with the “first day” postmark clearly imprinted, with foiling. Each element is numbered from 001 to 232.

The postage stamps issue Melliferous flowers will be available on Tuesday, June 11th 2019, in Romfilatelia’s shops network in Bucharest, Bacau, Brasov, Cluj-Napoca, Iasi and Timisoara and online on https://romfilatelia.ro/store/. 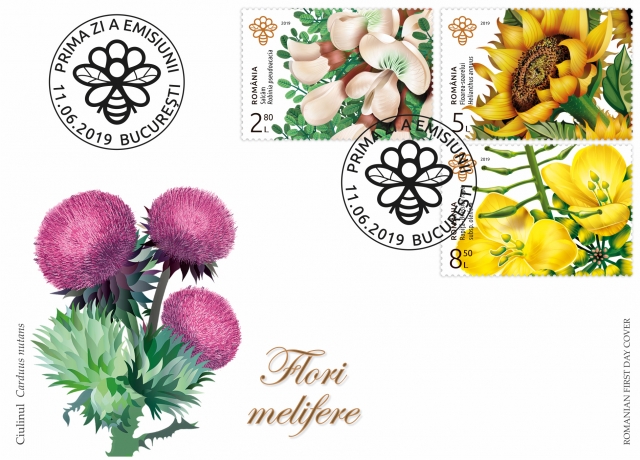 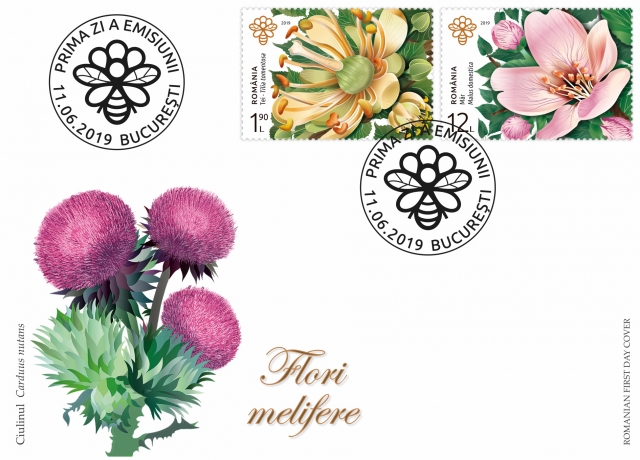 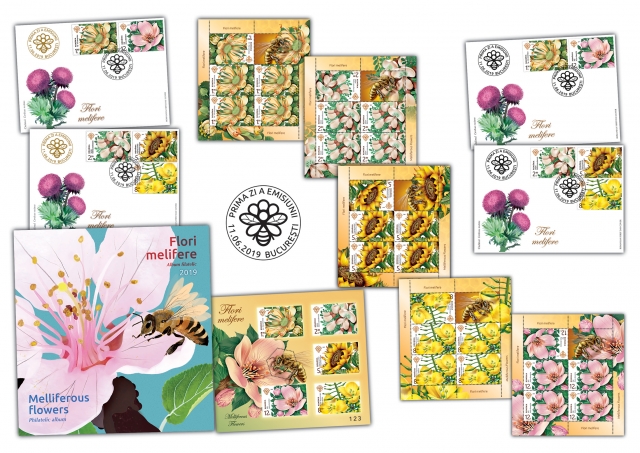 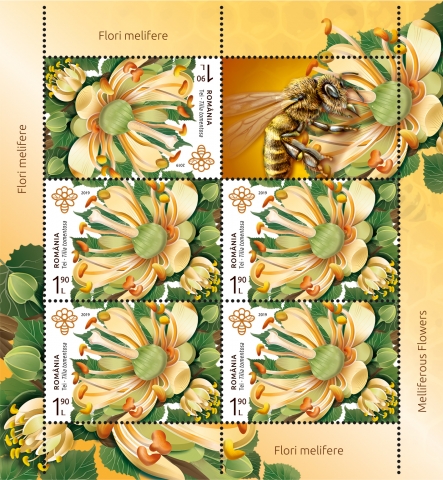 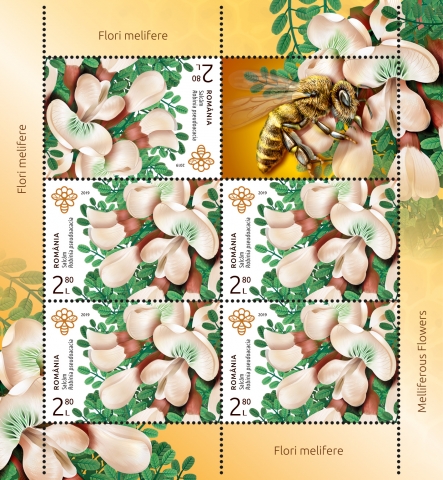 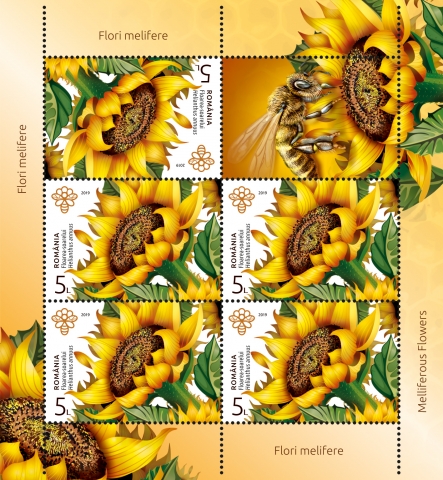 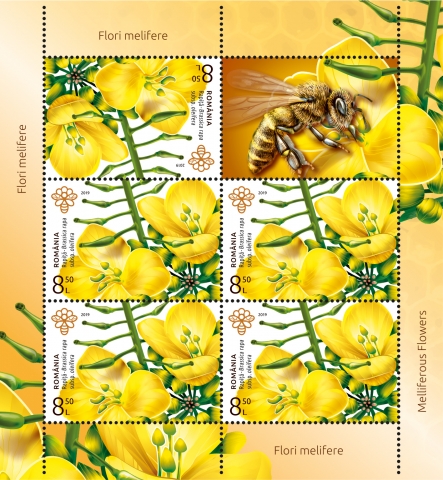 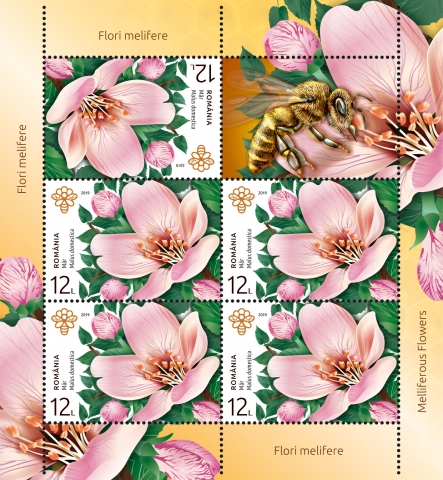 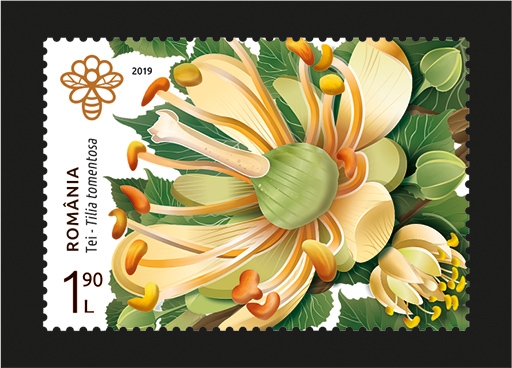 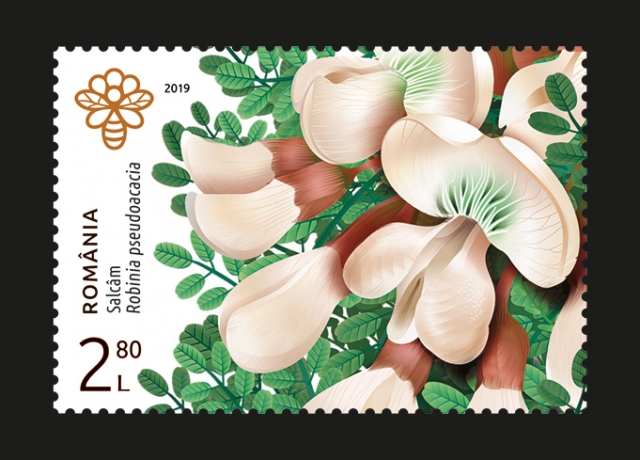 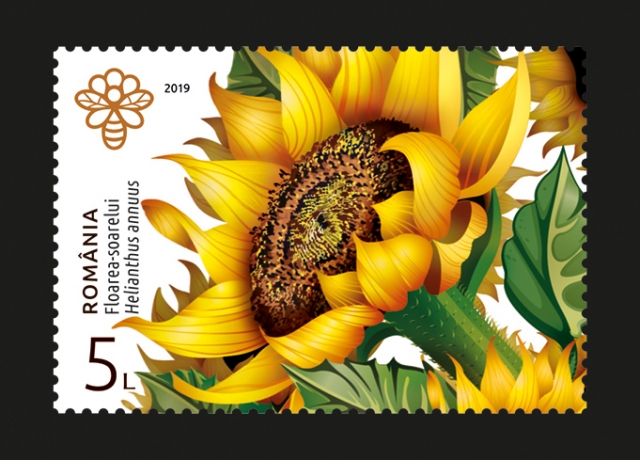 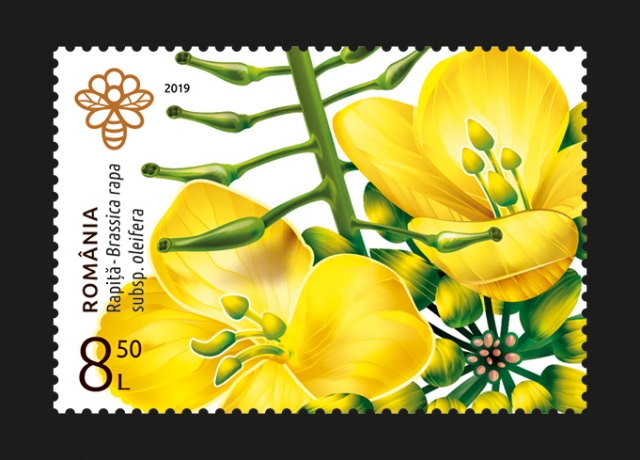