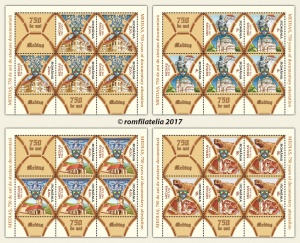 Medias was documented on 3 June 1267, under the name Medies.

On its anniversary, Romfilatelia celebrates alongside the City of Light, through the postage stamp issue Medias, 750 years of documentary attestation.

Medias or Medies, Medgyes, Medyesch, situated in the heart of Transylvania on the valley of Tarnava, welcomes you with a medieval air full of mysteries and stories to be discovered step by step, as one should.

Since the city has a history of more than seven centuries, the medieval and historical monuments within the city walls make it an open-air museum.

On the stamp with the face value of Lei 2.50, the Stephan Ludwig Roth High School is pictured along with the „Gemini” symbol on the façade of the high school. Located in the historical center of Medias, it was built at the beginning of the 20th century based on the project of architect Fritz Balthes from Sighisoara. The name „Stephan Ludwig Roth” is attributed to the high school in memory of the revolutionary humanist, in 1919.

On the façade of the high school there are three city-specific symbols: „Gemini”, which symbolize light, „Compass and Set Square” and „Golden Grapes”, which is also the symbol of the city.

The Tailors’ Bastion, the Spinner and the Orthodox Cathedral with the dedication „Archangels Michael and Gabriel” are found on the stamp with the face value of Lei 4.

The Tailors’ Bastion, tower and defensive bastion, is today presented to us in the form of a building with a simple architecture. Three of its rooms were used during the Middle Ages as a prison. Joining this tower, the „Spinner” statuie gave rise to various hypotheses, one of which is related to the Fates that determine man’s destiny from birth, or that she spins the city’s thread of life and that of its inhabitants.

The Orthodox Cathedral with the dedication „Archangels Michael and Gabriel” was built between 1929 and 1935 according to the plans of the architect George Placinteanu Liteanu from Bucharest. Built in Byzantine style, the cathedral has an area of over 500 square meters. The interior paintings were made by the painter Gheorghe Belizarie.

The exterior of the cathedral is as impressive as the interior, and the influences of the Brancoveanu style are obvious.

The Baroque edifice houses valuable exhibits, including the Treasure of Seica Mica (comprising 348 Romanian coins), the Panade treasure, folk ceramic pieces of different periods, sculpted objects from the feudal age, along with the richest ensembles of baroque furniture from Transylvania: a main altar, six secondary altercases and a pulpit.

On the stamp with the face value of Lei 16 is represented the Church of Saint Margaret, but also one of the two lions, symbol of the Schuller house. The Schuller House is documented in 1588 as the property of Johannes Schuller, Mayor of Medias at that time. But in the old chronicles it is mentioned a long time before 1588.

On the „first day” cover is the Trumpeters’ Tower, an architectural masterpiece of the city, classified among the top ten inclined towers of the world. It is one of the tallest towers in the country, measuring 68.5 meters and fits harmoniously in the architectural structure of the St. Margaret’s Evangelical Church. 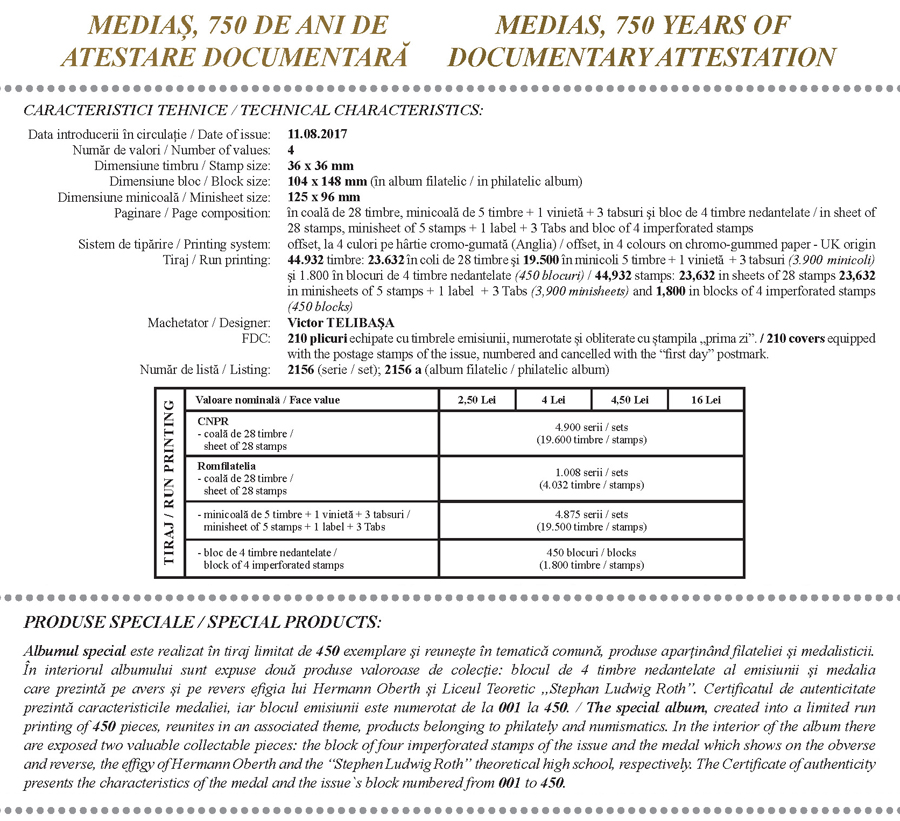