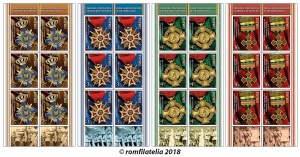 The Star of Romania National Order was established on May 10th, 1877, having five ranks: Knight, Officer (that had a rosette on the ribbon), Commander, Grand Officer and Grand Cross. It was also awarded with war insignia, representing two crossed swords with the point up, between the arms of the cross. The ribbon was made of red tabby with two blue strips at the edges. The first two ranks were worn on the left chest, the Commander on the neck, the Grand Officer on the neck and chest, and the Grand Cross on trail over the left shoulder and chest. Beginning with April 9th, 1918, for special acts, the Commander, Officer and Knight ranks could be worn with the ribbon of the Military Virtue Medal, that was red in color with a single blue stripe on the edges. The Star of Romania Order is awarded only to officers.

The most important medal awarded during the World War I was founded in 1880, with the Military Virtue inscribed statement. It had two classes: the 1st class in gold, and the 2nd class in silver. Was intended to be worn with tabby ribbon of blue color with a red stripe at the edges. Both classes were placed on the left chest. This medal took precedence in its category of decorations, and from 1916 was awarded only to the inferior ranks (non-commissioned officers and squad). The Military Virtue Medal was also awarded to women, who could wear it with the ribbon in the form of a bow. From April 9th, 1918, the medal ribbon could be attached to the Knight, Officer and Commander ranks of the national orders Star of Romania and Crown of Romania.

The Commemorative Cross of the 1916-1918 War Medal was established in 1918 and was awarded to all military and assimilated personnel, of any kind, that took part in the 1916-1918 campaign and that were integrated, attached or used with various assignments in squads or military services. The distinction was also received by the civilian clerks, as well as by the persons that, not belonging to the army, were called to perform an effective and permanent service for the army. For militaries, the ribbon of the medal was made of tabby, striped, dark blue and green in color, alternating equally, and reversed colors for civilians. For the battles on the different fronts to which the person or squad took part during the war, brass straps were applied transversally on the ribbon, with bronze inscriptions: ARDEAL, CERNA, JIU (TARGU-JIU), CARPATI, OITUZ, BUCURESTI, TURTUCAIA, DOBROGEA, MARASTI, MARASESTI, TG-OCNA etc.

Romfilatelia thanks the professor Corneliu Andonie from the “King Ferdinand I” National Military Museum and the National Archives of Romania for the support granted for the achievement of this postage stamp issue. 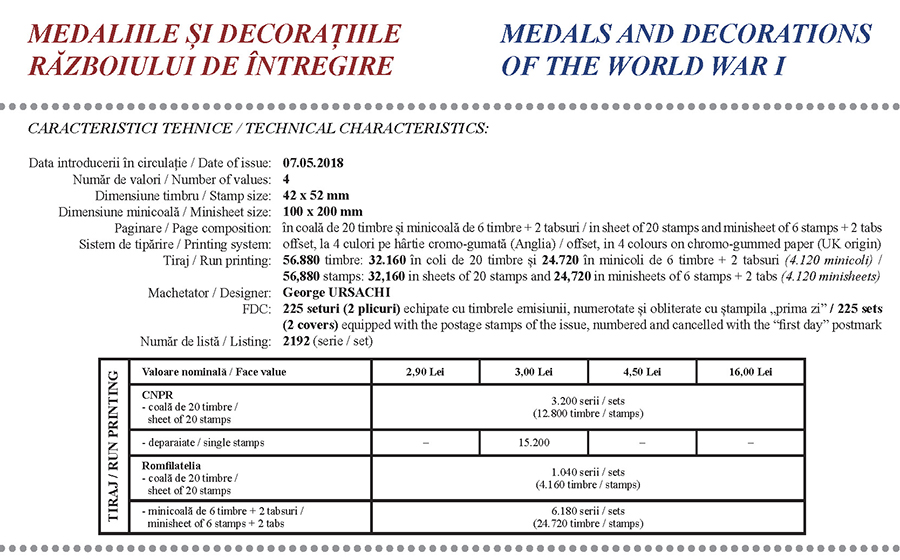