Keeping the tradition of philatelic projects dedicated to fauna, a topic appreciated by collectors and by the general public, Romfilatelia introduces into circulation the postage stamp issue entitled Masters of Camouflage.

The Stone-curlew (Burhinus oedicnemus), represented on the stamp with the face value of Lei 2, is a species present in the Southern and Eastern part of Europe, characteristic of the steppe open areas, pasture-lands and agricultural crops. Its body has 38-45 cm in length, with an average weight of 290-535 g.

Fearful and cautious, when taken by surprise, it can stretch to the ground, its plumage, the colour of dried herbs, helping it to camouflage easily.

The bird is recognizable due to the white stripes and spots on the wings, the yellow legs, but also due to the large yellow eyes, adapted to nightlife when hunting.

It feeds on molluscs, insects and larvae, snails, earthworms, frogs, rarely on small rodents, young birds from the nests of other birds, and also some plants. In Romania, it nests in the arid regions of Dobruja, the sandy grinds of the Danube Delta and some areas in the south of the country. In the cold season, it winters in Africa.

On the stamp with the face value of Lei 3 is illustrated the Syrian Woodpecker or the Spotted Woodpecker (Dendrocopos syriacus), a species that can be found in the Central and South-Eastern part of Europe. It prefers open areas such as orchards, parks and gardens, but we can also find it in broad-leaved and coniferous forests, where tree trunks exceed 25 cm in diameter. The length of the body is 23-25 cm, with a weight of 66-79 g. Its feathering is a combination of white, red and black, which helps it hide easily in its living environment. It resembles very well the great spotted woodpecker, but it lacks the black moustachial stripe on the sides of the face, between the beak and the nape.

It feeds on insects, fruits and seeds, being considered one of the omnivore woodpeckers. The species is monogamous, but solitary outside the nesting periods. In Romania it is present throughout the year and is spread especially in the lowlands.

Species present on most of the European continent, the European nightjar (Caprimulgus-europaeus), illustrated on the stamp with the face value of Lei 5, is characteristic of open and arid areas, represented by open wood areas of coniferous forests or mixed forests and pasture-lands. The body has 25-30 cm in length, with a weight of 50-100 g. The feathering, gray-brown, provides a very good camouflage during the day when it rests, easily being confounded with the bark of the tree. The bird is active at crepuscule and during night, when hunting intensely. It feeds on insects, which it catches on the fly.

It is monogamous, it nests on the ground, at the shelter of trees or bushes.

A population of 12,000-15,000 pairs of birds is estimated in Romania, with the largest number being found in Russia, Turkey, Spain and France. It winters in Africa.

The European Green Woodpecker (Picus viridis), also known in Romania as “ghionoaia verde”, represented on the stamp with the face value of Lei 19, is part of the Piciformes order and the Picidae family. Is one of the most widespread woodpeckers in Central Europe, Northwest Africa, Asia Minor, Iran. We encounter it especially on the ground where it searches for ants, its favourite food. The bird measures about 30 cm in length, with a 40-42 cm wingspan and a weight of 180-220 g. Due to its general colour, yellowish green, with red crown and nape and solid black on the lores, it camouflages very well in the grass. It is sedentary, shy and wary, but voluble and noisy during spring and autumn. In Romania, it is present throughout the year and is commonly met in broad-leaved forests with openings, but also in parks and open areas with clumps of trees. 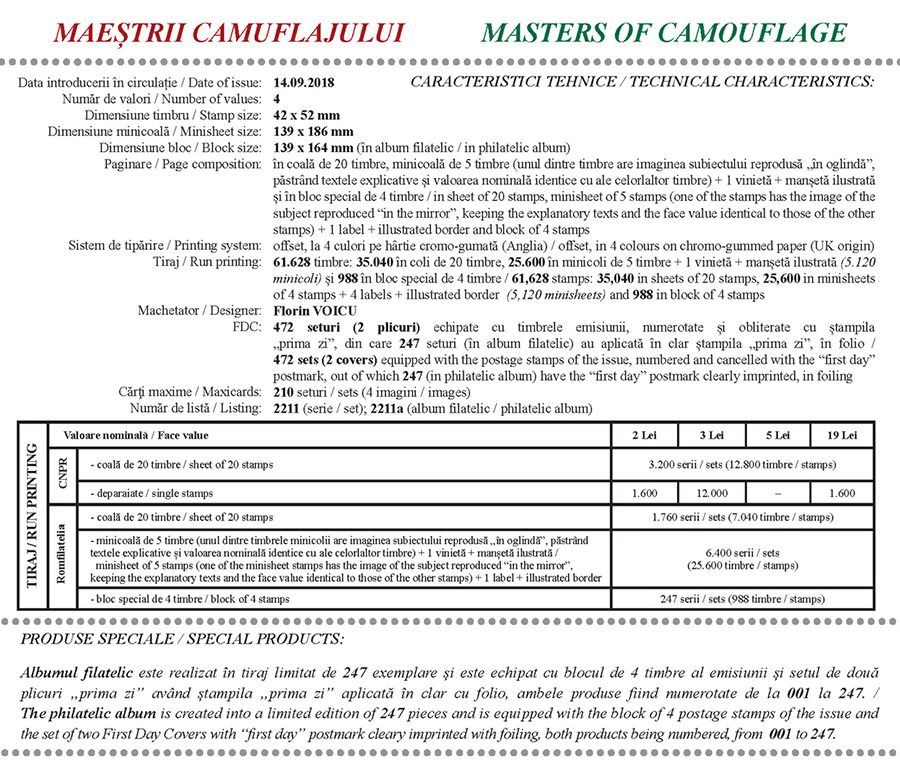