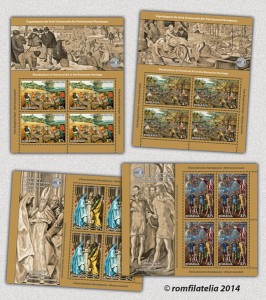 “Art does not reproduce the visible; rather, it makes it visible.” (Paul Klee)

Friedrich Schiller described art as being the daughter of freedom, over the years and all over the world, artistic creations being free manifestations of the most profound thoughts, ideas and events, thus remaining the main expression of the aspiration towards beauty and truth.

Art is a language, an experience, a form of universal education, a historical source enriching itself constantly and continuously transmitting its legacy to every generation in an aesthetic shape meant to consecrate people’s life in its most diverse forms.

Romfilatelia dedicates this philatelic issue to universal art, namely to paintings and works of worldwide consecrated artists that belong to the Romanian heritage and are preserved in the collection of the National Museum of Art of Romania.

The National Museum of Art of Romania is located in the building of the former Royal Palace in Bucharest. Currently, the museum hosts over 70,000 exhibits gathered in two art galleries: the National Gallery, dedicated to great Romanian artistic creations, and the European Art Gallery, dedicated to great names of the world artistic heritage. The latter gathers many schools of painting from Europe and artists from different periods, such as: Tintoretto (Italian School), Lucas Cranach the Elder (German – Austrian School), El Greco (Spanish School), Pieter Breughel the Younger and Pieter Paul Rubens (Flemish School), Ludolf Bakhuizen (Dutch School) and Claude Monet (French School).

The postage stamps of the issue Masterpieces of Universal Art in the Romanian Heritage depict representative paintings of two of the greatest European painters whose works can be found in the Romanian heritage, being exhibited at the National Museum of Art ofRomania. The issuing of these postage stamps provides an opportunity to honour the artistic work and the creative genius of these two great painters of mankind: Pieter Breughel the Younger and El Greco.

El Greco (Candia/Crete Island, 1541 – Toledo, 1614), by his real name Dominikos Theotokópoulos, from whose death we commemorate 400 years in 2014, is one of the greatest painters of the universal art Pantheon. His works stand out through a personal style marked by the rejection of naturalism and the promotion of an erudite style of deeply expressive effects and elongated forms suggesting a mystical exaltation, a style known as “Mannerism”. Disciple of Titian and Veronese, El Greco moves to Toledo, Spain, in 1577, where he will become known through many works with religious subject and the portraits that he will paint all along his life until 1614, when he passes away.

Pieter Breughel the Younger (Brussels, 1564 – Antwerp, 1638), Flemish painter, from whose birth we celebrate 450 years in 2014, is one of the representatives of the late Renaissance to early Baroque transition period. His work is mainly comprised of landscapes, religious subjects, scenes depicting country life and proverbs, being characterised by a mix of fantastic and grotesque. Breughel the Younger is also known for reworks of his father’s paintings, thus contributing to the increase in popularity of Brueghel the Elder.

The stamp with the face value of lei 7.60 illustrates a painting of El Greco, The Marriage of the Virgin. The pictorial composition is representative for the Mannerist period, by combining in a personal vision, the Catholic West during the Counter-Reformation and the Byzantine East. According to art critics, among the characters represented on canvas, there is also a presumed self-portrait of the painter.

The stamp with the face value of lei 8.10 reproduces The Martyrdom of St Maurice and the 10,000 Thebans, a version of the painting commissioned by Philip II for the Escorial. The subject matter of the painting is a dramatic episode in the history of Christianity depicted by the artist in a unique composition and association of colours, in order to illustrate the spiritual relation between the divine and the telluric.

An upper detail of the work The Adoration of the Shepherds, a special painting that knows several versions in El Greco’s work, is represented on the first day cover of the issue. The version found at the National Museum of Art of Romania was painted around 1600 and is part of a series of religious-themed canvases made for religious purposes composing the shrine of Doña Maria de Aragon College in Madrid.

Romfilatelia thanks the National Museum of Art of Romania for the documentary support granted in the accomplishment of this issue of postage stamps. 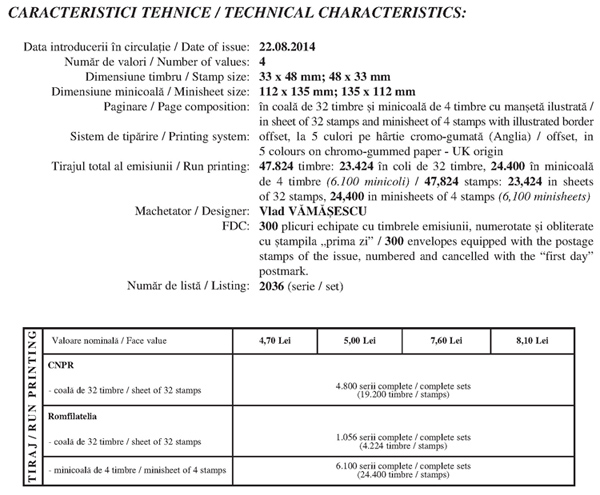