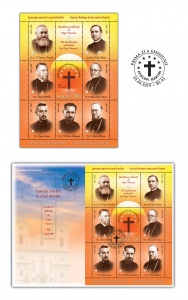 The martyr bishops to be beatified are : Valeriu Traian Frentiu, Vasile Aftenie, Ioan Suciu, Tit Liviu Chinezu, Ioan Balan, Alexandru Rusu, and Iuliu Hossu. Their names are illustrated near the portrait images of the perforated souvenir sheet with a the face value of Lei 28.50, where they are represented as a symbol of the sacrifice and the passage into light of the souls of those deceased, depicted by the seven-star crown in the vicinity of the cross.

The bishop Valeriu Traian Frentiu was born on April 25th, 1875 in Resita, Caras Severin County. After graduating from high-school and passing the maturity examination (1894), he attended the Central Seminary in Budapest and was ordained in Lugoj (1898), obtaining a Ph.D. degree in Theology in Vienna, at Augustineum (1902). Bishop of Oradea and the senior of the Greek Catholic bishops, he died on July 11th, 1952 in Sighet prison, at the age of 77.  He represented the United Romanian Church before t he authorities, leading the resistance of the Church to the hostility they faced with the Communist government.

The second beatified bishop is Vasile Aftenie, born on July 14th, 1899 in Lodroman, in Alba County. Being on furlough during the First World War, he passed the maturity examination (1918), and then he was admitted to Blaj Seminary (1919) and was sent to the Greek Pontifical College in Rome, where he obtained his Ph.D. degree in Theology at the De Propaganda Fide Athenaeum (1925). Vicar Bishop for Bucharest and the Old Kingdom, he was arrested on the night of October 28/29th, 1948, he was imprisoned in the camp at Caldarusani Orthodox Monastery, then in Bucharest, in the basement of the Ministry of Interior. The physical and psychological violence suffered during the “investigation” damaged his health, and on May 10th, 1950, he passed away, at the age of 51.

The third beatified bishop is Ioan Suciu, who was born in Blaj, Alba County, on December 3rd, 1907. After the maturity examination (1925), he attended the courses of the Greek Pontifical College in Rome, becoming Ph.D. in Philosophy at the De Propaganda Fide Athenaeum (1927) and Ph.D. in Theology at the Angelicum Athenaeum (1932). In 1947, he returned to Blaj as administrator of the Archbishopry of Alba-Iulia and Fagaras. He was arrested on October 27th, 1948, being moved from Caldarusani Orthodox Monastery to Sighet, where he would pass away on June 27th, 1953, at the age of 46.

The fourth bishop is Tit Liviu Chinezu, who was born on December 22nd, 1904 in Iernuteni (Reghin) in Mures County. After passing the maturity examination (1925), he graduated from the Greek Pontifical College in Rome, where he obtained his Ph.D. degree in Philosophy at the De Propaganda Fide Athenaeum (1927) and the Bachelor’s degree in Theology at the Angelicum Athenaeum (1931). He was arrested on October 28/29th, 1948 and taken to the camp set up at Caldarusani Monastery, where he was secretly consecrated as bishop on April 25th, 1949, through a mandate from the Apostolic Nunciature. He died in Sighet prison on January 15th, 1955, in the absence of any medical treatment, at the age of 51.

The fifth bishop to be beatified is Ioan Balan. He was born in Teius, Alba County on December 12th, 1880, and after passing the maturity examination in 1899, he was seminarist of the Archbishopry of Alba-Iulia and Fagaras at the Central Seminary in Budapest (1899-1906). He earned a scholarship at the Augustineum Institute in Vienna (1904-1906) and a Ph.D. degree in Theology (1906). Bishop of Lugoj, he died on August 4th, 1959, at 79 years, at Ciorogarla Monastery, where he was detained with forced domicile.

The sixth beatified bishop is Alexandru Rusu, born on November 22nd, 1884 in Saulia de Câmpie (today Mures County). After passing the maturity examination (1903), he was seminarist of the Archbishopry of Alba Iulia and Fagaras at the Central Seminary in Budapest, where he became a Ph.D. in Theology (1910). Bishop of Maramures, he was arrested on the morning of October 29th, 1948, and between 1950-1954 he was imprisoned at Sighet prison, and from 1955 he was placed in forced domicile at the Orthodox monasteries of Curtea de Arges, Ciorogarla and Cocos. He was later convicted by the Military Tribunal of the Third Military Region of Cluj to “heavy prison for life”, being accused of treason. He committed punishments in Pitesti, Dej and Gherla prisons, where he died without medical care on May 9th, 1963, at the age of 79.

The seventh bishop who is to be beatified is Iuliu Hossu, who was born on January 31st, 1885, in Milasu Mare (today Milas, Bistrita Nasaud County).  After passing the maturity examination (1904), he attended the courses of the Urban College in Rome, where he obtained his Ph.D. degree in Philosophy (1906) and Theology (1910) at the De Propaganda Fide Athenaeum, after which he was hired in Lugoj. Ordained priest in Rome in 1910, after holding various positions at Curia of Lugoj, he was Bishop of Gherla (1917), and after 1930, Bishop of Cluj-Gherla. He was one of the emblematic figures of the Union of Transylvania with the Kingdom of Romania, reading the Alba-Iulia Resolution of December 1st, 1918. Arrested and imprisoned, he survived the prison in Sighet. He was imprisoned until the end of his life with forced domicile at Caldarusani Monastery. Pope Paul VI called him a cardinal in pectore (i.e. known only by the Pope). He died on May 28th, 1970, at the age of 85. 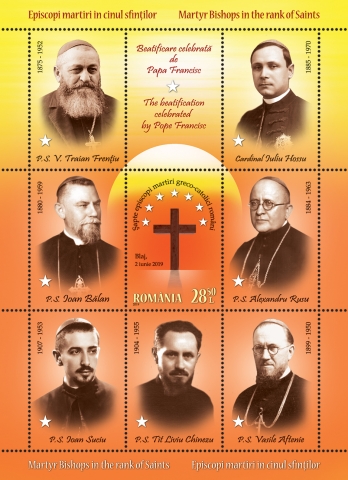 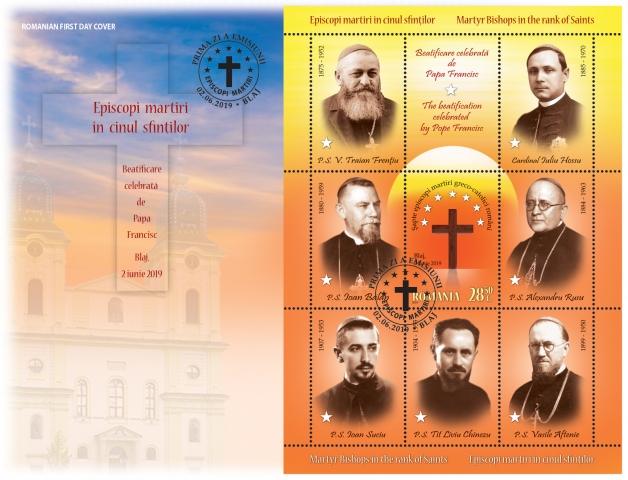 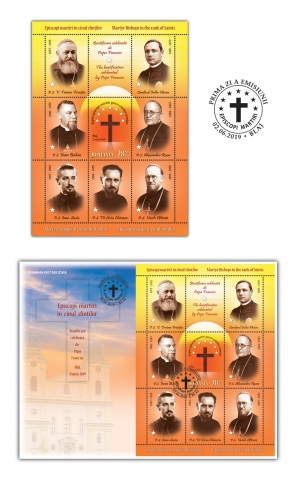