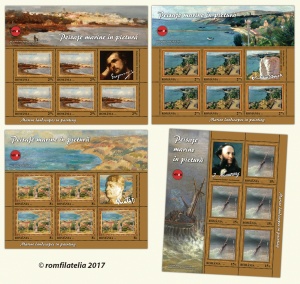 The stretch of the sea, with its amazing blue, with its infinite shape and impressive waves, is a subject of inspiration often approached by painters. This year, in the hottest month, Romfilatelia illustrates the sea, seen through artworks from the patrimony of the National Art Museum of Romania, in the new issue of postage stamps entitled Marine Landscapes in Painting.

He began by painting icons in several churches and monasteries in the country, and the mural work at the Agapia Monastery has remained, to this day, a genius achievement. He gained national recognition when his drawings were the basis for the banknotes issued by the NBR at the beginning of the 20th century. Nicolae Grigorescu became a symbol for young generations of artists who, in the first decades of the 20th century, sought to identify and bring to light the values of Romanian spirituality.

The “City by Sea (Naples)” painting is illustrated on the stamp with a face value of Lei 2.20. It is an oil painting on wood, created between 1873 and 1874, when Grigorescu was on study trips in Italy. So when returning to the country, Grigorescu displayed paintings with the picturesque landscapes in Naples and Rome.

Balchik was and has remained a fascinating place for Romanian art since the first half of the 20th century, Cecilia Cutescu-Storck being among the artists enchanted by the bohemian settlement.

An inspirational place for painters, the small settlement on the Black Sea shore has a history of nobility, thanks to those who represented it in their works. “Balchik” is represented on the stamp with the face value of Lei 2.70 and bearing the signature of Cecilia Cutescu-Storck. It is distinguished by the light, spontaneous and lively manner with subtle colour harmonies that integrate the charm of the place.

Cecilia Cutescu-Storck occupied prestigious positions in the artistic environments: a professor at the School of Belle Arte in Bucharest (the first female professor of state artistic education in Europe) and president of the Trade Union of Fine Arts.

Dumitru Ghiata’s works occupy a special place in Romanian modern art and were created from sources that go beyond the concrete. Ink, gouache and tempera have contributed to the creation of pure sketches and shorts that always define images that impress us with simplicity and warmth. Together with Jean Alexandru Steriadi, Dumitru Ghiata discovers the beauty of the marine landscape and paints many paintings on the Black Sea coast, in Balchik.

As an artist, Dumitru Ghiata is distinguished by the way he translates each landscape according to light and its changes. The artwork called “Balchik”, so simple in its austerity, releases a profound essence of the image and is illustrated on the stamp with a face value of Lei 8.

Considered the Marine Landscape Master, Ivan Aivazovsky created paintings of the same theme, the sea. Aivazovsky was the one who introduced the marine landscapes in Russian art, making this one of the important moments of the 19th century plastic art history. This year we commemorate the 200th anniversary of the birth of the great painter. One of the paintings of the great lover of the sea, “Shipwreck” is illustrated on the stamp with the face value of Lei 15.

In ultramarine blue tones to shades of green, quiet or full of storm, crystalline or charged and dark, so is the sea rendered in the paintings of Aivazovsky.

Yet Aivazoksi’s marines do not copy nature, they are always rendered in connection with all the other elements, resulting in the veracity of images created.

Romfilatelia thanks the National Museum of Art of Romania and the Bucharest Municipality Museum for the documentary support granted in the creation of this postage stamp issue. 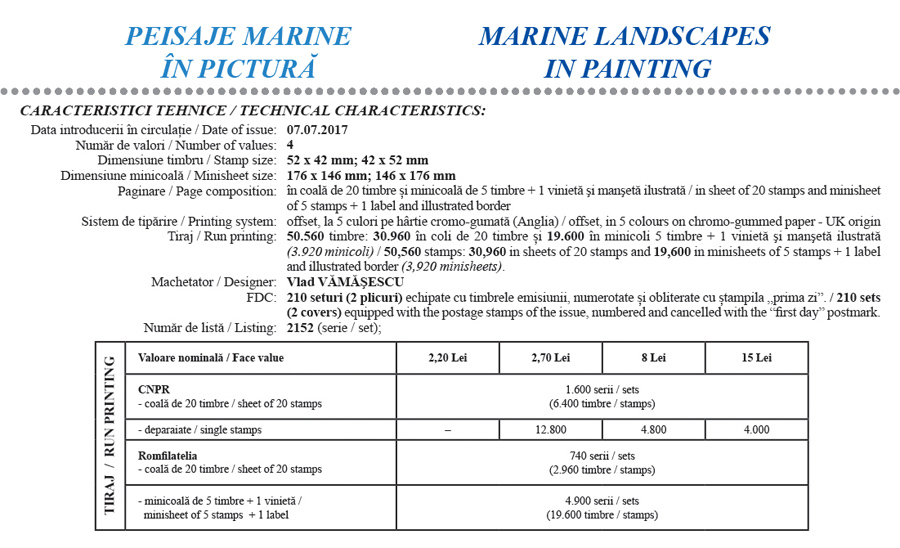