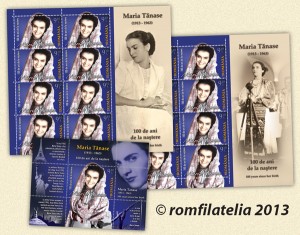 The one who would be referred to as “Magic bird of the Romanian folk song” or “the nightingale from the Mulberry Orchard”, Maria Tanase made her debut on stage at the age of 21, in 1934, under the pseudonyms Elise Lamé and Mary Atanasiu together with Carabus Expres musical magazine band.

The meeting of the famous singer with the folklorist Harry Brauner (April 1935) meant a valuable collaboration with the great ethnomusicologist Constantin Brailoiu, who recommended her to the Austrian label Columbia Records – His Master’s Voice.

In 1937, Maria Tanase had a well deserved international success as representative of the Romanian song at the Paris World’s Fair.

The radiophonic debut in the radio show Ora Satului (The Village Hour) (20th February 1938), accompanied by Ion Matache folk band, represented the beginning of a brilliant artistic career both in the country and abroad.

On 24th September 1938, the stage of Alhambra Theatre of Varieties presented to the public the debut of Maria Tanase as an actress – with artistic and musical talents – in Constelatia Alhambrei (Alhambra’s Constellation) performance.

In parallel with the theatrical performances, Maria sang in restaurants such as Neptun, Luxandra, Parcul ARO, Luther, Continental, “Prisma-nalta” from Obor Market, Hanul Ancutei (Ancuta’s Inn) being frequently invited to bring her contribution as soloist in concerts with a large audience held at the Romanian Athenaeum, Dalles Hall, other halls from the capital city and the big cities of the country, incessantly affirming her love for the Romanian public.

The spring of 1939 marks a crucial event in the singer’s life: the New York World’s Fair. Before her departure abroad, the restaurant Luxandra Parc offered to the audience from Bucharest a farewell dinner to which Victor Predescu’s orchestra took part. The funny menu prepared for the guests contained the following: Tuica de Valeni (Valeni brandy) brought on Trenule masina mica (Train, Little Train), Cold sturgeon prepared after the recipe Habar n-ai tu (You have no idea), Chicken with garlic sauce made by Maria neichii, Marie (Maria, my love), Stuffed beef fillet by Marioara de la Gorj (Marioara from Gorj), and Hop lele, hop! Rum coffee. Among the guests present at this farewell dinner we could see Liviu Rebreanu, Ion Minulescu, Cezar Petrescu, Geo Bogza, Ion Vasilescu, Ion Pillat and many others.

Arriving at the Romanian pavilion inNew York, Maria Tanase sang with Grigoras Dinicu’s orchestra in front of the American high officials next to whom we could also see George Enescu, professor Dimitrie Gusti, Jascha Heifetz and Constantin Brancusi.

After returning to Romania, Maria Tanase resumed her artistic activity at Alhambra Theatre of Varieties, where she also sang jazz music presenting Folk songs in jazz rhythm in December 1939 at Radio Bucharest.

In numerous shows on Radio Bucharest, many of them being broadcast live, Maria Tanase manifested her passion for interpreting popular songs of the old Bucharest from the time of the singing compiler Anton Pann, our first musical chronicler Nicolae Filimon, and from the urban folk atmosphere where the classical writers of the Romanian literature such as Ion Creanga, Ion Luca Caragiale, Mihai Eminescu, Ioan Slavici etc. lived and wrote. Maria Tanase also interpreted vibrant compositions inspired from the Romanian folk music and dedicated toBucharest, which was called “Little Paris” in the interwar period.

Her first performance in a European and Oriental artistic tour was in Turkey(March 1941) where she performed in Melody Revue and Cocktail Revue on the stage of the Taxim Gazinozu Summer Theatre fromIstanbul andAnkara. After two months of shows, the Mayor of Istanbul recognized Maria Tanase as “an honorary citizen” of the city.

Employed by Café Wilson in Bucharest as of 1942, Maria Tanase, together with the pianist Leonida Petrescu and Victor Predescu’s orchestra, attracted all great foreign personalities who had concerts at the Romanian Athenaeum. It is well known that the conductor Ionel Perlea and the German pianist Walter Gieseking watched the performance of the famous singer for a whole night.

Captivated by the “charms” of Maria Tanase, the poet Tudor Arghezi affirmed in his characteristic style: “Who utters the Romanian syllable, verse and song as the subtle Tanase? The devil? Not even himself”.

Maria Tanase’s debut in operetta on the stage of Alhambra Theatre of Varieties in Bucharest, was in 1944, under the guidance of Egizio Massini and having Ion Dacian as her partner. Afterwards, there was her theatrical debut in Lev Tolstoy’s play The Living Corpse followed by a part in the play Horia by Mihail Davidoglu.

As of 1945, after many musical shows and parts played, she decided to continue her carrer at the Vaudeville Theatre, which later became Constantin Tanase Variety Theatre. However, she didn’t stop collaborating with orchestras such as “Perinita”, “Doina Argesului”, “Taraful Gorjului”, “Doina Moldovei”, “Flacara Prahovei” and “Doina Banatului” (“Lazar Cernescu”) of Caransebes.

She had her last concert at Hunedoara, on 1st May 1963, with Targu Jiu orchestra, Doina Gorjului, where she had been transferred as a folk singer in 1962.

For her artistic merits, Maria Tanase was awarded the State Prize (1955), the title of Emeritus Artist (1957) and the Grand Prix du Disque given by “Charles Cros”Academy ofParis (post-mortem, 1965). The Radio, Television, Electrecord and the Cinematography sustained the fulminant artistic career of Maria Tanase by recording with her more than 120 folk songs, ­adaptations of the folk music, love songs, variety couplets and compositions of Romanian pop music, interviews, shows and filmed scenes. But, the musical repertoire of Maria Tanase was much wider totalizing almost 400 songs from all Romanian regions, to which we add the songs sung in French, Turkish, the variety couplets and the compositions dedicated to the great artist by the famous Romanian folk music composers, among whom we mention Petre Andreescu, Ion Vasilescu, Elly Roman, Henry Malineanu, Gherase Dendrino, Aurel Giroveanu and Temistocle Popa.

The exceptional singer and extremely natural actress Maria Tanase has remained inimitable. The diplomat and writer Valentin Lipatti wrote about her fascinating figure: “she had big hypnotizing eyes and a youthful slim body. Her entire appearance resembled a mythological salamander, emerged from a half-pagan Romanian fairy tale”.

Killed by a cruel disease in 1963 (22nd June), the unique singer who had a huge capacity to communicate with the audience, Maria Tanase remains, after half a century since her death, a living presence of uniqueness in the Romanian folk heritage which she mastered with a remarkable professional authority.

In this context, Romfilatelia, as a promoter of the Romanian values and personalities, introduces into circulation a postage stamps issue dedicated to the anniversary of a century since Maria Tanase’s birth, a complex and representative artist of the Romanian musical culture and spirituality, a genius singer of the Romanian genuine folk music, according to some musicologists.

Suggestively entitled Maria Tanase – 100 years since her birth, the jubilee philatelic issue presents scenes from the life and extraordinary artistic career of the singer to whom we owe the fame of the Romanian folk song worldwide.

We address our thanks to the Romanian Radio Broadcasting Company, as well as to the Romanian Academy Library of Bucharest for the support granted in the accomplishment of this postage stamps issue.