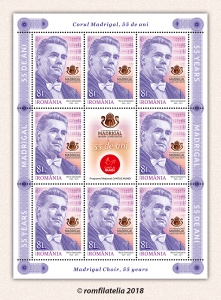 With the occasion of the 55th anniversary of the “Madrigal – Marin Constantin” National Chamber Choir foundation, Romfilatelia introduces into circulation the postage stamp issue Madrigal Choir, 55 years. On the stamp with the face value of Lei 8 is reproduced the portrait of Marin Constantin (1925-2011), the founder and mentor of the Choir.

The “Madrigal – Marin Constantin” National Chamber Choir is an emblem of Romanian and universal musical life, and in 2018 it turns 55 years of uninterrupted activity. Since it was founded, in 1963, by conductor Marin Constantin, the Madrigal Choir has claimed almost 4,500 concerts applauded around the world. The ensemble has become a world-class chamber music choir, officially recognized in 2016 as the Ambassador of Freedom, Hope and Peace, a title received at the United Nations General Assembly, in Geneva.

The Madrigal Choir is the most appreciated professional choral ensemble in Romania, actively involved in the development of the choral movement in the country, through the Cantus Mundi National Programme. Since its early years, the Madrigal Choir has become an appreciated presence on the most important European scenes, and the critics have compared the performance of the choir and the conductor with a “Stradivarius violin in the hands of Paganini” (Dobrica Stevanović, 1968).

The ensemble’s notoriety has been strengthened through thousands of concerts on four continents, under the coordination of the founder, who passed away in 2011. Disciples of Maestro Marin Constantin carried forward his unique concept: the specific sonority, stereophonic location on the scene, and stunning outfits. Also, the choir completed its name by taking that of its founder, thus becoming the “Madrigal – Marin Constantin” National Chamber Choir. Since 2014, the ensemble is conducted by Anna Ungureanu, a musician with a decade of experience alongside Maestro Marin Constantin. The second conductor is Cezar Verlan.

The choir’s repertoire includes hundreds of European Renaissance works, Byzantine music, classic Romanian music, traditional carols, contemporary compositions and instrumental vocal works. In fact, even the name of the ensemble denotes the inclination towards medieval creation, the madrigal being a short vocal, polyphonic, lyrical composition specific to the 16th century.

The “Madrigal Miracle”, as Wilma Vernocchi, member of Milano’s La Scala Opera House management named it, has inspired the imagination of many poets and composers, who wrote for this ensemble. Miriam Marbe, Sigismund Toduta, Sabin Pauta, Tiberiu Olah, Liana Alexandra, Cornel Taranu, are just a few names of Romanian composers, and among poets, Grigore Vieru and Nichita Stanescu have written the most vibrant poems dedicated to the Madrigal.

Since its inception, the Madrigal Choir has had a European trajectory, being present at festivals in major musical cities on the continent. The ensemble was always received enthusiastically by audiences, who frequently called these musicians “Les Champions, Les Champions”. Since 1964, the Madrigal has participated in all editions of the “George Enescu” International Festival. Today, the choral ensemble brings the European spirit into the minds and hearts of children, along with the love for choral singing, through the Cantus Mundi National Programme. The Madrigal Choir is the initiator and promoter of the most extensive social integration movement through choral singing in Romania. Launched in 2011, voluntarily, at the initiative of conductor Ion Marin, the idea, that has become the Cantus Mundi National Programme since 2014, has grown remarkably. More than 30,000 Romanian children have joined this national movement, with more than 800 children’s choirs being registered online at www.cantusmundi.com.

For the members of the choir, the Madrigal is a real school, for Romania, it is a national brand, and for Europe it is a relevant part of the continent’s cultural heritage.

Romfilatelia thanks the “Madrigal – Marin Constantin” National Chamber Choir for its documentary and photographic support given for the creation of this postage stamp issue. 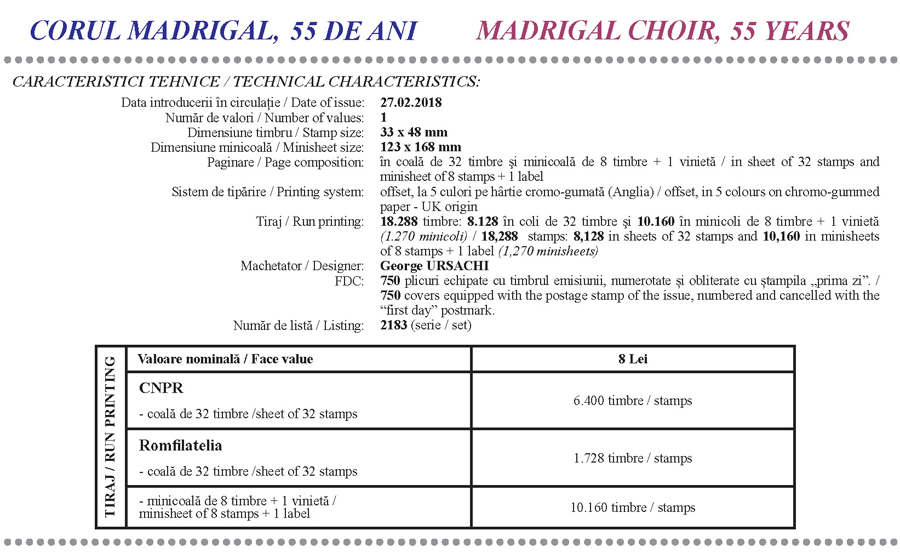