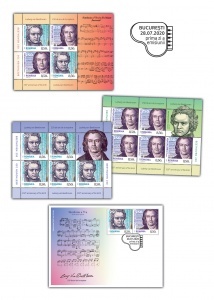 Romfilatelia continues the series of topics dedicated to cultural anniversaries with a postage stamps issue dedicated to classical music – Ludwig van Beethoven, 250th anniversary of his birth, which will enter into circulation on Tuesday, July 28th, 2020.

One of the greatest composers of the world of all time, Ludwig van Beethoven (1770-1827) was a talented musician and a fighter alike, his masterpieces being made after the onset of deafness – the symphonies Heroic, Destiny, Pastoral, the Appassionata sonatas, the Moonlight Sonata, the Violin and Orchestra Concert or the Concert no. 5 for piano and orchestra, the Symphony No. 9 (with the famous Ode to Joy – the anthem of the European Union) and Missa Solemnis.

Beethoven’s family had Flemish origins, and his father, Johann, was also a musician, at the Bonn Court. In the early years, Ludwig was introduced to the secrets of classical music by his father, who encouraged him to give public concerts as a child, like Mozart.

After the first public audition, at the age of 8, appreciated by music lovers, Beethoven’s training was taken over by Gottlob Neefe, a famous professor from Bonn, who, in addition to music lessons, also taught him ancient and modern philosophy.

Appreciated by the aristocracy in his hometown, at the age of 17, in 1787, Beethoven was sent to the Court of Vienna, a city considered the cultural centre of the Holy Roman Empire of the German Nation. Here he met great musicians of the time, being a student of Joseph Haydn, Johann Georg Albrechtsberger or Antonio Salieri. It is said that when Mozart saw Beethoven “at work”, he would have said: “Remember his name, you’ll keep hearing about him”.

Mozart’s intuition was confirmed by Beethoven’s brilliant career, his value being fully appreciated as early as his days alive. Unlike other artists of the time, who were employees of the royal or aristocratic courts, Ludwig van Beethoven had creative freedom, after receiving an annual grant from the city of Vienna. The musician’s only duty was not to move from this city of culture, being free to compose whatever he wanted, when he wanted, to accept or reject orders.

The composer enjoyed going out in society and interacting with the personalities of the time. Beethoven was not sympathetic to everyone – Johann Wolfgang von Goethe calling him, for example, a “savage”. However, personal relationships did not influence the music, and many of Goethe’s poems can be found in Beethoven’s compositions.

The artist composed with the speed of the one who had little to live on, trying to use every free time he had at his disposal, neglecting sleep, food, and friends. He was also concerned with the future of classical music, selecting promising youngers to train and promote them.

As from 1972, a fragment from the prelude to the Ode to Joy, in the Symphony No. 9 by Beethoven, became the European anthem.

On the stamps of the issue, both with the face value of Lei 8.50, there are portraits of Ludwig van Beethoven, alongside with scores of the composer. The First Day Cover reproduces a fragment from the Symphony No. 5 in C minor, next to the musician’s signature.

The postage stamps issue Ludwig van Beethoven, 250th anniversary of his birth will be available on Tuesday, July 28th  2020, in Romfilatelia’s shops network in Bucharest, Bacau, Brasov, Cluj-Napoca, Iasi and Timisoara and online on https://romfilatelia.ro/store/. The postage stamps issue is completed by Fist Day Cover, the sheet of 28 stamps, the minisheet of 5 stamps + 3 label and the block of 4 stamps with illustrated border. 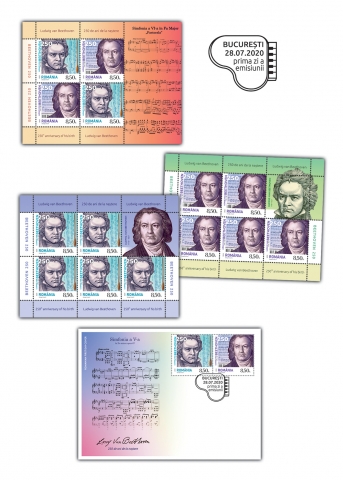 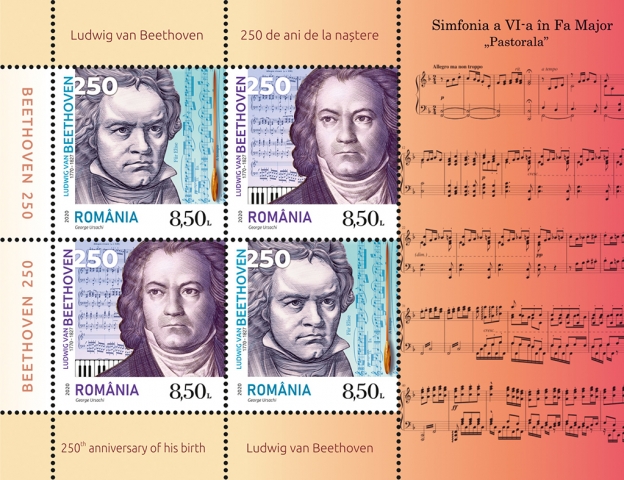 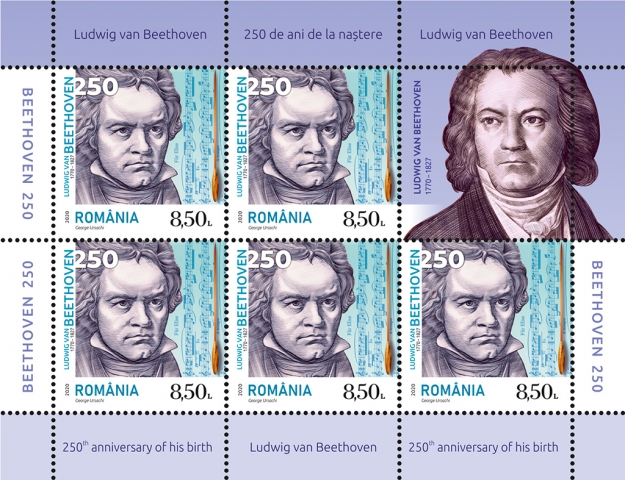 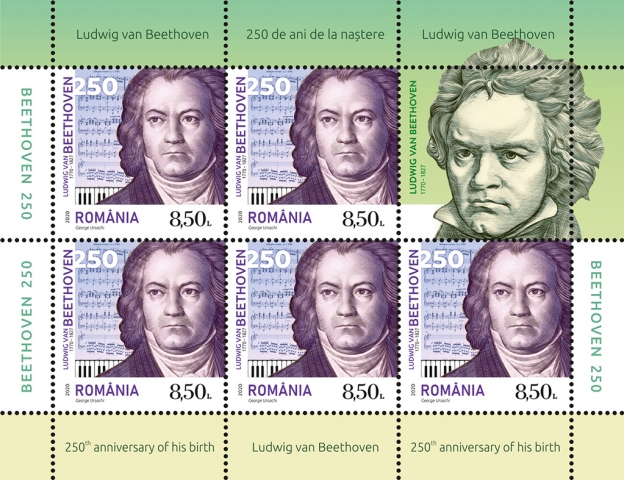 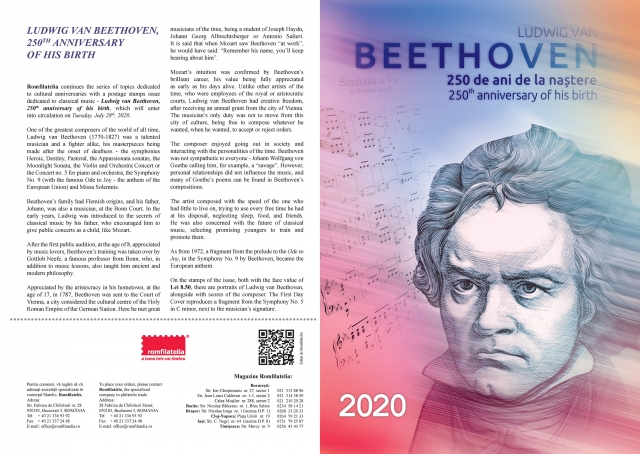 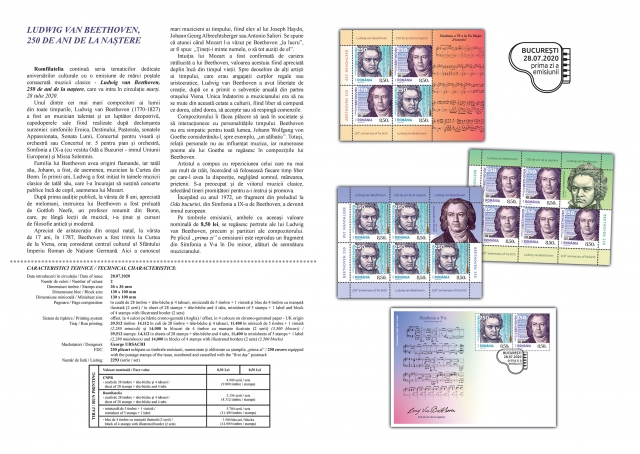 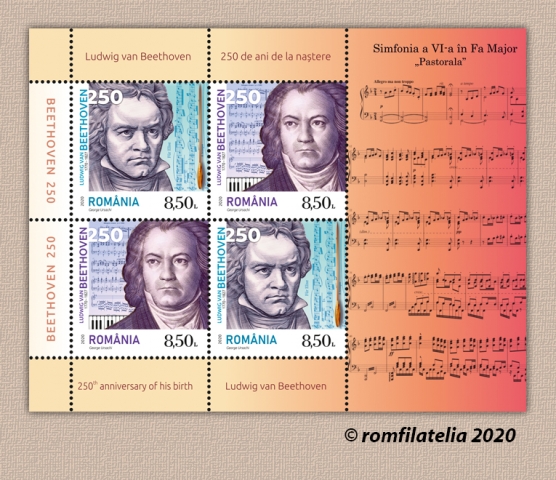 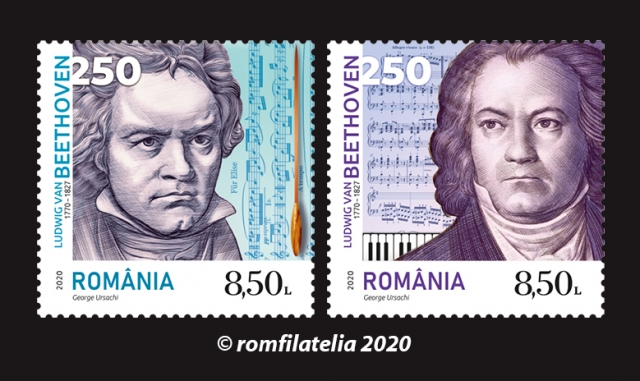 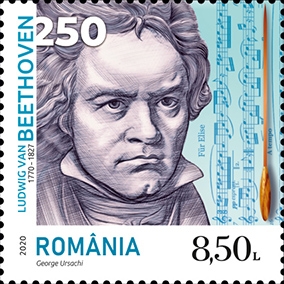 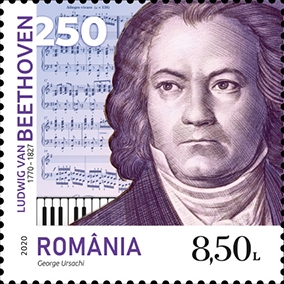