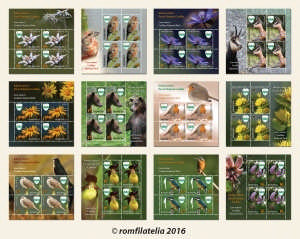 The park’s uniqueness is given not only by the great diversity of plants and animals, but also by their rarity. For example, it is worth mentioning that from the ice age, plants survived on the mountain that are not found anywhere else. Rare birds can be found that are adapted to the alpine environment. Over thirty species of orchids, among which 3 are protected by law are the jewel of the Ceahlau.

The conservation of the Park’s nature began in 1997, when a team of Danish specialists, stunned by the beauty and bounty of Ceahlau, contributed decisively to the creation of the Scientific Council of the Park, through the Ministry of Environment. In the mean time, Ceahlau gained the status of protected area by the founding of an Avifauna protection area, of the National Park, and by it being declared a Site of European Community Importance.

The twelve postage stamps of the issue illustrate images of flora and fauna existing in the Ceahlau National Park area.

Edelweiss (Leontopodium alpinum) also called the Queen’s flower, a symbol of those who love hiking in the mountains, is declared a natural monument and is protected by law. The flowers, small and numerous, are made up of petals of an immaculate white and create the impression of a single flower in the shape of a star.

Often found on the rocky ridges and even rarer on the mountain plateaus, the Edelweiss has its roots fixed in what little earth there is in the hollows dug into the limestone cliffs. In our country, the Edelweiss can be seen flowering in July and August.

The red crossbill (Loxia curvirostra) is a sedentary bird that inhabits the conifer forests of the Carpathian Mountains. Medium size bird, it has a thick bill whose curved mandibles cross at the top, hence its Romanian popular name (little scissors).

The food of the red crossbill is based almost exclusively on the seeds of conifers. The red crossbills travel in group to forage for food, which create the advantage of finding the seeds of different conifer species easier, and to evaluate the best areas to feed in. Through song and its pitch information about the conifer harvest are transmitted, so that the birds in flight may join those already feeding. Mainly, the red crossbill picks the seeds from the cones attached to branches, but also from the detached ones which they hold in their claws, being, as already mentioned, specialized and especially equipped to extract them from under the scales of the cones with its beak with crossed tips.

Anemone transsilvanica, Liverwort or Liverleaf (Hepatica transsilvanica Fuss) is a rare plant that grows only in the Carpathian Mountains and is declared a natural monument.

This species has a particular aesthetic and ecological value, being by her beauty, a true delight for lovers of trekking. The plant produces blue flowers, rarely white or pink, starting from February and ending in May. The plant itself isn’t very tall, reaching a height of maximum 20 cm. Growing in a remotely accessible mountainous region, the Anemone transsilvanica -develops strong roots, which allow it to anchor itself in the difficult soil and offer it resistance against fast flowing water.

The Chamois (Rupicapra rupicapra) is one of the most valuable species of fauna in Romania and is protected by law. It is considered a true pearl of the mountains and can be found on the peaks of mountains.

The wondering of the Chamois are dictated by the necessity to procure food and the need to adapt to climacteric conditions. In spring, the Chamois climbs down to those areas where the first grasses appear, in summer they prefer different species of clovers and grasses. In winter, the available food is restricted and the Chamois is often forced to dig with its front legs in the snow to reach dried grasses. Regarding its water requirements, they are satisfied when it feeds on vegetation covered in dew.

On its wondering, one can say in broad strokes that during summer the Chamois stay in the area of alpine peaks and in winter they stay under the shelter of the forest, but the differences between individuals are great, varying according to sex, age and temperament.

Arnica (Arnica montana), a perennial plant that grows in mountainous regions, has flowers like daisies of bright yellow. The name is seemingly derived from the Greek word “arnikos” – lamb’s pelt, but other common names for it are: the wood’s chariot, the sun’s grass, the fairies’ chariot. It can be found at 1000 m altitudes, coloring entire pastures in golden yellow. 30-50 cm tall, it has an erect, cylindrical stem, simple, with few ramifications, with short hairs, topped by an inflorescence.

The flowers are collected in June and July and are the basis for many mixtures, usually tinctures and extracts.

The Brown bear (Ursus arctos) is a long-lived animal, living up to 30 years in the wild and up to an extra 20 years in captivity.

The largest number of brown bears in Europe can be found in Romania, in the Carpathian Mountains, about 6,000 specimens.

The brown bear has much appreciated dense fur, with two layers of hairs, the shaft and the fluff. Even if withdrawn to the Carpathians, the brown bear finds in Romania its most favourable shelter in all of Europe. The brown bear lives along the Carpathian chain, mainly among the cliffs, where it can make its den. Being a strong animal it can walk up to 150 km in one day, its main senses being the sight and the smell.

The brown bear is present in folklore since the oldest of times, mentioned by Mircea Eliade as the totem of Dacian warrior monks, the bear has become a legendary figure, regarded with fear and admired at the same time.

The European robin (Erithacus rubecula) – also know in Romanian as red craw – is an insectivorous bird and it is encountered throughout the year in Romania, during summer in mountain forests and in winter it descends into the plains, in parks and gardens.

The plumage of both sexes is brown, with a rusty patch on the craw and chest. They nest in tree hollows, under river banks or in fallen tree trunks. Almost two thirds of European robins die before reaching the age of one, taken by raptors or because they are unable to fend for themselves. Ten percent of adult European robins loose their lives during territorial disputes.

Great yellow gentian (Gentiana lutea) is a herbaceous plant protected by law, declared a natural monument. It grows as part of Romania’s wild flora, from the plains to the sub-alpine region, being commonly known as: yellow gentian, bitter root, bitterwort, centiyane and genciana. Its Latin name – Gentiana lutea – comes from antiquity, from Gentius, the King of Illyria, who seems to have discovered and mentioned in a writing of his that the plant had tonic properties.

The water pipit (Anthus spinoletta) nests exclusively on the heights of the Carpathians. It lives in meadows, clearings or forest margins where the vegetation is dense, installing its nest on the soil, next to boulders, and the eggs, 4-5 in number, are dark gray in color, with dark dots and commas. The female assures the incubation which starts in May. Its body is grayish with darker spots on the upper side.

Lady’s slipper orchid (Cypripedium calceolus) is a very rare orchid species protected by law. The strain shows only 3 – 5 leaves and a single flower on top,
like a moccasin, a feature which has brought the name of “slipper”. The plant grows until it reaches a height on maximum 20 – 30 cm and blooms from July to September.

The stem is topped by an intensely yellow flower. The flower appears usually towards the end of sprig and the beginning of summer. After flowering, the plants go into hibernation.

The common kingfisher also known as the Eurasian kingfisher (Alcedo atthis) is one of the most colorful birds in our country. Blue-green on the back, brick-red underneath, on the abdomen and around the eye, with a white chin and sides of the neck, it has short feet and tail, and a big, strong beak. The bird lives on the banks of fast running water or clear, still waters where fish exist. Its main food sources are small fish, aquatic insects, their larvae, but also small crustaceans and ¬tadpoles.

Lately, their population has risen after a period of time when this bird was an endangered species.

The martagon lily or Turk’s cap lily (Lilium martagon) is a rare species, declared a natural monument and protected by law, being one of the most beautiful and graceful plants to grow in the oak and birch forests of our country. The martagon lily may be easily recognized in nature because of its 5 cm flowers, with six violet-pink petals, which display red spots, with six long stamens, perfumed only in the evening.

Romfilatelia thanks the Ceahlau National Park and the photographers George Avanu, Dorin Bofan, Octavian Chende, Cristian Mihai and Serban Simbotelecan for the documentary support granted in the creation of this postage stamp issue. 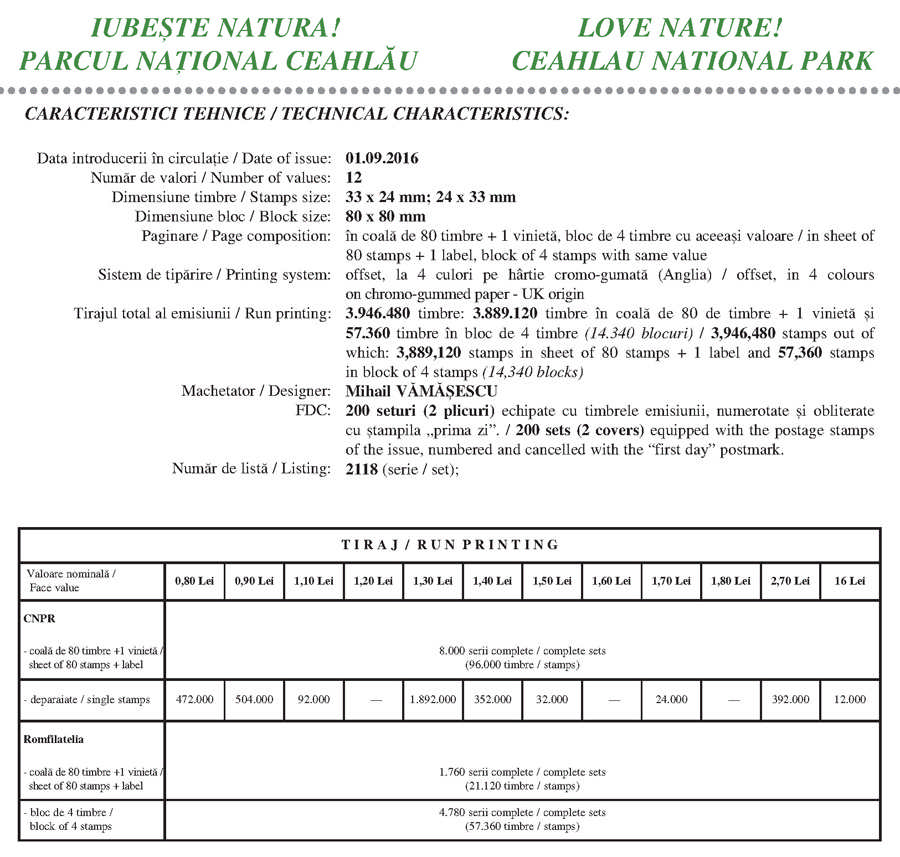